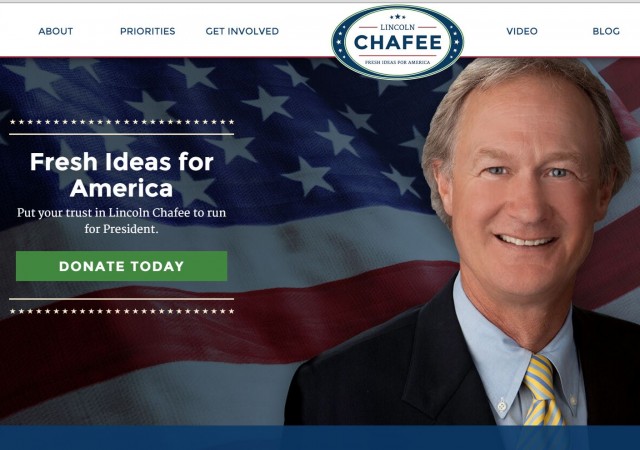 When Rhode Island reader and blogger Tony emailed me about it, I thought it was a joke. Chafee has a reputation of a buffoonish political character who switches political sides on a whim. On second thought, that may make him perfect as a presidential candidate.

Former U.S. Senator and Governor Lincoln Chafee, who slipped quietly out of the State House in January, made a big splash Thursday in local politics by announcing he may run for president in 2016.
Chafee made his announcement on his website Chafee2016.com and in a news release in which he said he was announcing the formation of an exploratory committee to consider a run as the Democratic Party nominee.

Chafee, a former Republican turned Independent turned Democrat, said he will spend the next few months in New Hampshire, Iowa and other key battleground states, asking voters whether his “independent thinking and fresh ideas for the future” are what is needed in the 2016 presidential campaign.

GoLocalProv has more details on his background:

Chafee was elected Mayor of Warwick as a Republican in 1992, and held that position until he was appointed to the United States Senate in 1999 to fill the remainder of the term of his father, John Chafee, who died in office.

Chafee won reelection in 2000, and was a vocai critic of President and fellow Republican George W. Bush, and was the only Republican in the Senate to have voted against authorization of the use of force in Iraq.

He was defeated in the 2006 race for Senate by Democrat Sheldon Whitehouse.

In 2010, Chafee announced his intentions to run for Governor of Rhode Island as an independent, and won a 3 way race with 36% of the vote.

In 2013, Chafee became a member of the Democratic party, and did not seek reelection to the office of Governor in 2014.

You know what I say? He may be the missing Linc the Democratic Party has been seeking for a contested primary.

I also think Linc may be able to harness support, based on the bio on his website:

Chafee is a 1975 graduate of Brown University, earning a degree in the Classics. A four-year varsity wrestler, Chafee received the Francis M. Driscoll Award for leadership, scholarship and athletics. Upon graduation, Chafee attended Montana State University’s Horseshoeing School and for the next seven years he worked as a blacksmith at harness racetracks throughout the United States and Canada.

Had I known this would happen, I never would have left Rhode Island.

The talk radio is going to be gold, pure gold.

I take this as a possible sign that at the higher echelons of the Democrat Party, it is a growing belief that Hillary (for reasons not yet known to the public or media) is toast and the field is wide open. Maybe someone has leaked Clinton’s dismal internals.

I also think that if Hillary doesn’t soon show definite signs of moving to the left, Obama, with a whisper to an aid, will go Menendez on her ass and leak indictable evidence of malfeasances while Secretary of State, or flat-out have the DoJ indict her. You have to know the White House holds plenty of such evidence, held now as a cudgel over her head.

I also think the ‘chemtrail’ conspiracies of the ’90s were real, and that the Clinton government was covering America in Liberal Gas, but that’s an issue for another website.

CHEMTRAILS ARE REAL YOU BUTTHEAD!!!
hehehe

Bill Clinton was covering America liberally all right, as evidenced by the stains on Monica Lewinsky’s dress.

Slightly different take. She can’t win a two way race but can get a plurality in a 5 way race on name recognition/celebrity status.

She is weak…yet is strong enough to get the 30-35% to come out on top and survive.

This is what I’m theorizing, hidden shit sandwiches for Hillary:

I can see his bumper sticker now …

Chaffing at the bit to be President!

The takeaway here is how bereft of talent the Democrat Party is. Like Chafee, many of the Democrat Senate candidates in 2014 came from political “dynastic” families: Nunn, Begich, Grimes, Pryor, Landrieu and probably others I’m spacing on at the moment. They all lost.

He thinks the 315 million Americans who not only rejected others attempting to ride the coattails of their family into office and who elected the largest majority of conservative Republicans to represent them in state legislatures, and given Republicans one of the largest majorities in the U.S. House, want a tired, old, governor of a dynastic family from the tiniest, perhaps most liberal northeast state in the union to be their president?

It’s even worse than you show – remember they ran Stephen Colbert’s sister in South Carolina.

For all their egalitarian talk, Democrats always favor the relatives like the vassal system of feudal days.

So he has a “…reputation of a buffoonish political character” eh?

Obviously the Dims love them some buffoonish political characters as VP, why not POTUS?

This could be fun! Remember how progressives love to concern troll Republicans? Well, the time for payback has come. I can just see it now:

“Lincoln Chafee is the sort of pragmatic moderate that Democrats should nominate if they are serious about winning in 2016. Unfortunately, Democrats prefer dangerous extremists who will divide rather than unite the country.”

“Lincoln Chafee is the one candidate Republicans fear to run against in 2016. Sadly, Democrats will probably nominate a bomb-throwing extremist who can’t win in 2016.”

“It is sad that a centrist with a solid record of achievement like Lincoln Chafee doesn’t have a chance of winning the Democratic nomination. As a life-long Democrat I am fearful of how extreme my party has become.”

“Maybe Lincoln Chafee is too intellectual and too pragmatic to have a chance at the Democratic Party nomination.”

Thanks Linc, I needed a laugh.

Kirsten Gillibrand is on a short list, IF the SS Hillary starts taking on water.

That’s a pretty long list, and Chafee wasn’t even on it.

LOL. There are names on their list of people I have never heard of, and I’m a political junkie. Plus Ben Affleck? LOL. And indicted Bob Menendez? LOL.

hey … Afleck might have a shot. No idea how they came up with that list, but it was interesting they had several others that had “declared” for 2016. I wonder if they made the news anywhere. Where’s the “my taxes are too damn high” guy, or those like him on the Democrat side?

All of a sudden Joe Biden is starting to look good to Democrats. If Lincoln leaves RI, the village will be missing it’s idiots. Lincoln is stupid and dangerous. His Dad was acceptable but leaned left in his later years. Linc lives off his Dad’s reputation but people saw what a fool he was and mocked him.

If only Groucho Marx were alive to moderate it (maybe Cosby is available?) . . .

All it would be missing is the color. Is this the year for Al Sharpton?

And they said the Democratic race would be a bore!

Be still, my heart.

I think I remember that Lincoln Chafee is a very good friend of Hillary Clinton. I think he is just trying to split the not-Hillary votes during the democrat primaries, sort of like Ron Paul always did for the eGOP candidate.

I keep warning you guys– the Democrats are desperate, and they will at least SAY they have come up with the next shiny new thing…..

Chafee is even more of an Israel hater than Obama and he is in the James Baker/Brent Scowcroft foreign policy wing. He won the governorship with all of 36% of the popular vote – that figures.

Of course he makes his speech standing in front of shelves full of books none of which he has actually read.