“Too scared to watch” 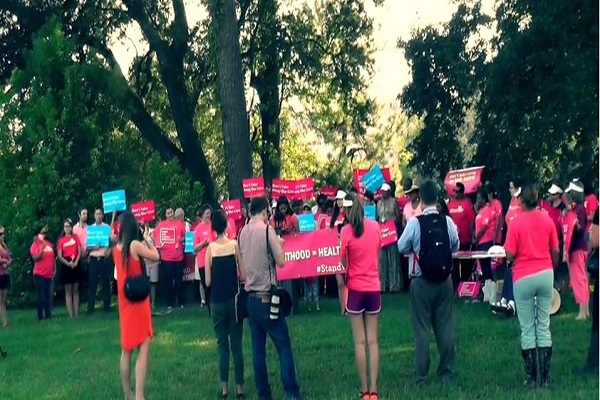 Following his move to defund Planned Parenthood in Louisiana, Governor Jindal learned that pro-abortion advocates and supporters of Planned Parenthood’s horrendous practices were staging a protest at the governor’s mansion.

His response was perfect.

We will play the videos on a screen outside the LA Gov. Mansion so those protesting my decision to defund Planned Parenthood know why.

Needless to say, the pro-abortion Planned Parenthood supporters did not want to watch the videos and moved further away from the mansion so they wouldn’t have to hear about the selling of baby parts without consent, the selling of “fully intact” aborted babies, and the removal of brains from babies who survived the abortion. Today, pro-life proponents and those who oppose these appalling practices by Planned Parenthood are staging protests across the nation. Here’s how it’s going so far:

Hey @WLWT, @FOX19, @FoxNews, @CBSNews, @CNN Thousands have gathered to rally, have you been covering this? #ProtestPP pic.twitter.com/nPGSTberOM

Protesters in Champaign. Never forget: goal of abortion is to produce death, & they want us to pay for it. #ProtestPP pic.twitter.com/7q5L31QOda — Ryan (@Stings600) August 22, 2015

About 200 pro-lifers at the Dayton Planned Parenthood for the National Day of Protest. #ProtestPP #PPSellsBabyParts pic.twitter.com/rj8krj5psT — Bryan Kemper (@BryanKemper) August 22, 2015

What Jindal did to counter the PP activists was brilliant. The spirit of Breitbart lives on!

Man, I wish Jindal had specified the protest area for the KBB/PP crowd. Can’t do that though.

Jindal is great, and doesn’t get enough credit. Great stuff!