“There are times when they would just take what they want and these mothers don’t know. “ 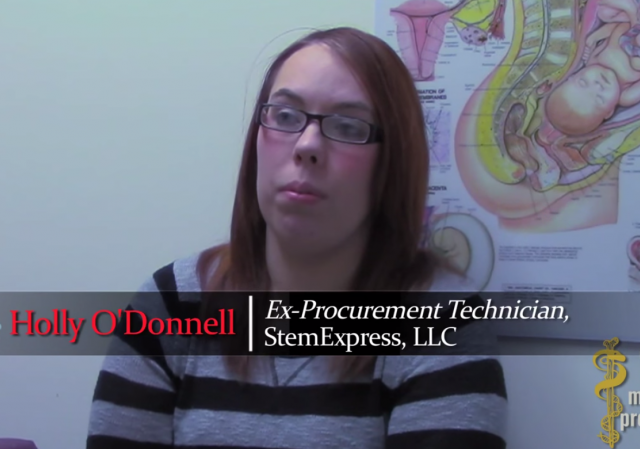 “The co-workers I had — they would not consent the donors,” said O’Donnell. “If there was a higher gestation and the techs needed it, there were times when they would just take what they wanted and these mothers don’t know. There’s no way they would know… it’s terrifying.”

O’Donnell tells a story about a patient she met with who refused to give consent for blood and tissue donation. Later a different tech, knowing the patient was unwilling to donate, took blood samples anyway.

Unlike previous videos, this one does contain graphic images though the content is still disturbing:

The series follows the personal narrative of Holly O’Donnell, a former Blood and TIssue Procurement Technician for StemExpress, a start-up biotech company from northern California that partners with Planned Parenthood clinics to purchase their aborted fetus parts and resell them for scientific experimentation. As a procurement tech, O’Donnell’s job was to identify pregnant patients matching the specifications of StemExpress customers and to harvest the fetal body parts from their abortions.

According to O’Donnell, Planned Parenthood gave StemExpress workers access to patient records and schedules so that the harvesting company could plan for the days when patient “supply” would be greatest. “They give you a sheet, and it’s everybody for that day, who’s coming in for an ultrasound, who’s coming in for an abortion, medical or a late-term abortion,” O’Donnell explains. Even patients just seeking a pregnancy test at Planned Parenthood were considered part of the supply: “Pregnancy tests are potential pregnancies, therefore potential specimens. So it’s just taking advantage of the opportunities.”

“When you first go to the clinic what you do with StemExpress and you tell them if there’s something you need,” said O’Donnell explained. “Let’s say I needed a certain gestated fetus, let’s say I needed a fifteen-week fetus for some reason. So I go, I’m looking for a fifteen-week fetus today, so if you could let your staff know, and they’re like, yeah, we’ll let you know.”

O’Donnell described how in encouraging patients who were not comfortable with getting an abortion, to “run,” she found herself in trouble with the clinic for “missing opportunities.” “I’m not going to tell a girl to kill her baby so I can get money and that’s what this company does,” she said. “If abortion was a good thing, there wouldn’t be so much emotional damage from it.”

that supposed to say does not contain graphic images?
haven’t watched it yet but the statement as written seems to imply that.

Of Course Planned Parenthood did it without consent!

Any other claim is a lie.

I suppose there is a roughly 50/50 chance that these are the “female parts” the progs are always clamoring about?

Seems like JJTrombone was here calling me a “dickbrain” the other night for suggesting this MIGHT be the case.

Such a nice boy…

Surprise is, these evil’ists are not running commericals or interwebby ads, you know: ‘BOGO’. ‘Hurry while supplies last’. ‘Price reductions: Was, is Now’.

Remember: there WILL be a flood of civil suits by mothers who were not “consented” by Planned Abortionhood. The burden will be on the baby killers to prove EFFECTIVE informed consent once the allegation is made by the mothers.

When this first broke, that was my observation – that if enough lawsuits were filed the entire org could be taken down. But there is an additional claim that is cognizable – the same tort that is available if a blood relative witnesses a violent accident/death (the name of it escapes me right now). There is a part of it which describes those circumstances where the truth of the negligent/reckless act is concealed from the relative. It’s a form of fraud as I recall and the one year discovery rule applies. The constant refrain of properly obtained consent, as recited by PP, can easily be argued to be an ongoing effort to conceal liability.

A by-product of this entire mess is that we might finally get to the point of establsihing that DNA is a legal identification of a human being. That would make the entire “when does life begin” kerfuffle to be mostly moot and also would make Roe v Wade immaterial precedent as regards abortion.

I think you’re thinking of negligent infliction of emotional distress.

Texas is not big on “emotional distress” damages, but there are some exceptions, like where a mortuary mishandles a loved-one’s body.

Sure could be another cause of action.

What would it cost to live forever? It seems that many people are willing to make a deal with Planned Parenthood.

PP defenders – are saying that PP is not doing this for profit, PP is only covering their costs.

If so – why dicker over the price of the parts.

Also, consider the positions of the people doing the haggling.

They weren’t low-ranking office drudges or volunteers. They were the head ducks, several doctorate-level people.

Are we really arguing about a mother’s right (who willingly allows a “medical professional” to butcher who unborn child) to either consent or not as to whether tissue and blood is taken??? You decide to abort and your consent in this matter isn’t worth peanuts. You’re just as guilty as PP!