But still getting mostly white crowds 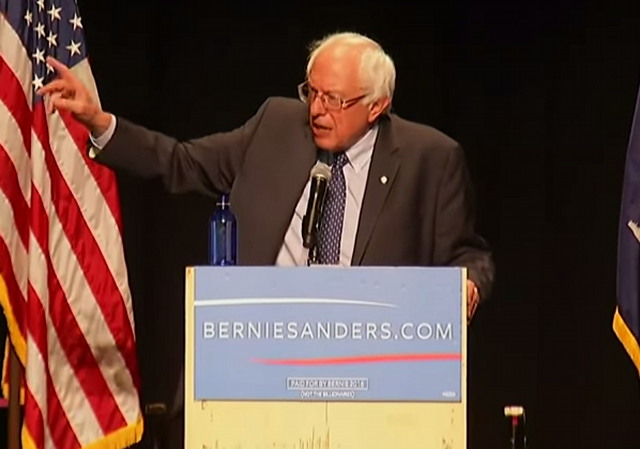 It looks like Bernie Sanders learned something from his recent run-in with #BlackLivesMatter in Seattle because he’s now taking great pains to reach out to black voters.

Bernie Sanders looks to broaden his appeal in South Carolina

Bernie Sanders fired up a lively crowd of supporters Friday as he began a campaign swing through this early primary state that seven years ago helped to boost the candidacy of another senator who many thought couldn’t beat the odds of winning the presidency.

Sanders even made reference to President Obama’s historic election in 2008 as evidence that the country “has in fact made real progress of overcoming our legacy of historical racism … But the bad news is racism still remains a much too real part of American life.”

The reference to Obama and the acknowledgement of the need to continue working to vanquish racism was applauded by the predominantly white crowd, which was far smaller than the throngs that turned out for a series of Sanders events on the West coast, but no less enthusiastic. The campaign said between 2,600 and 2,800 people attended the event at the TD Convention Center. Greenville is close to the North Carolina border and several people in the crowd had driven in from the Tar Heel State.

Sanders, a self described socialist democrat, has struggled to attract black supporters and twice young activists from the Black Lives Matter movement have disrupted his campaign appearances.

The Associated Press video below is from Sanders’ event in South Carolina. Take note of how Sanders rails angrily about the high unemployment rate for black youth without blaming the current administration:

Associated Press writer Bill Barrow notes that despite Bernie’s new outreach program, most of the progressive fans showing up to hear him speak are still white:

Sanders gets raucous, but mostly white welcome in South Carolina as he works for black support

The Vermont senator addressed an overwhelmingly white crowd in the Republican stronghold of Greenville, South Carolina, as he made his case that “racism still remains a much too real part of American life.” He’s expected to meet privately with black leaders while in the state.

“There is no one who will fight harder not only to end institutional racism, but to make fundamental changes in our broken criminal justice system,” he said, drawing roars from the crowd of almost 3,000.

He struck a similar chord Friday evening in front of another 2,000-plus people in the capital city of Columbia. That crowd was younger than in Greenville, but no more racially diverse.

“There is no one who will fight harder not only to end institutional racism, but to make fundamental changes in our broken criminal justice system,” he said.

By which he meant, “I will fight hard to maintain our institutional racism in law and regulation, but I’ll ‘fix’ our criminal legal system by imposing more racial criteria”.

Doesn’t Bernie the Communist support Abortion (racist against Blacks as the stats on it show) and Gay Rights?

Based on the pictures of his rallies, Bernie draws as many unpaid persons of color as there are candidates of color running for President as Democrats in 2016.

What’s clean and wholesome fun for the whole family is to go to left wing sites and ask if they stopped letting black folk into his rallies after the BLM microphone incident.

Michelle Obama and I agree that there is no such thing as institutional racism. There is, however, a lot of personal racism (I think it is really provincialism) among highly-placed Democrats who claim to be Liberal.

She moved from Chicago to Princeton about the time I moved from Houston to DC. Later I lived in Chicago. In both Houston and Chicago, I noticed open and friendly working relationships between people in ordinary authority. When I moved to DC, however, after about 6 months I noticed the lack of black people in positions of ordinary authority. There was also all this elaborate conversation about what you could and could not say. It didn’t take me long to realize that the PC topic was a coverup: people were pretending that, if you didn’t say it, you couldn’t prove some very real, intrenched prejudice. George Bush tagged it “the soft bigotry of low expectations.” I thought that phrase was apt.

Now we have Bernie Sanders wooing black voters, on behalf of the political party whose policies have devastated black enclaves across the country. I am sure he is sincere, but it is just amazing how bad the policies he supports have been for black families.

I’ve read opinions about how disenfranchised black voters feel after 6+ years of the chosen one. And the “diversity” (ugh) at rallies for every Dem running proves there is little motivation. But it would still be a bizarre anomaly if more than 10% of black voters pulled the lever for the eventual GOP nominee. Perhaps there will be an all time low of black voters showing up at the polls in 2016. Which is a shame.