Progressive Dems unable to stand up to a handful of protesters. 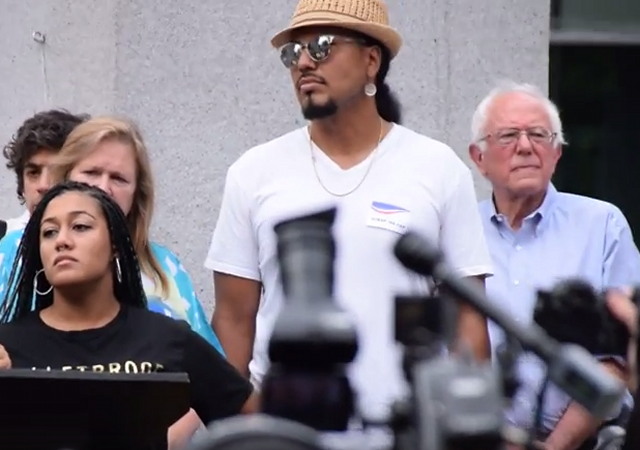 For the second time in a month, Bernie Sanders has been derailed by Black Lives Matter activists. The last time was at the Netroots Nation conference in Phoenix. This time it was at a campaign rally in Seattle, WA.

A planned speech in Seattle by presidential hopeful Bernie Sanders celebrating the anniversary of Social Security and Medicare was scuttled Saturday after protesters from Black Lives Matter took the stage and demanded that the crowd hold Sanders “accountable” for not doing enough, in their view, to address police brutality and other issues on the group’s agenda…

Shortly after the senator from Vermont started speaking, a small group of protesters took the microphone, shared a series of local grievances with the crowd, including school disparities and gentrification in Seattle, and then asked for a period of silence to commemorate the one-year anniversary of Michael Brown being shot and killed during a confrontation with a police officer in Ferguson, Mo.

Here’s a video of the activists taking over the podium while shouting that they would not be silenced:

Twitchy has rounded up some tweets with pictures from the event:

Marissa from #BlackLivesMatter asking @BernieSanders why he didn't apologize for net roots pic.twitter.com/t5S57H1LVq

15 more months of this. Reap the whirlwind, Dems. https://t.co/lnOBZoL7LA

This is Occupy “blocking traffic and restaurant sit-in” ignorant and self destructive…someone pass the popcorn.

And with the same financing.

Hey, Bernie! Feelin’ the Bern yet?

Bernie’s not worried cuz he knows Kill Black Babies/PP is slowly taking care of the problem and these “protestors” won’t protest KBB. So, why worry? Bernie’s giving it and them time.

Hey Bernie: Standing quietly in the corner while a couple of radicals commandeer your rally isn’t a great demonstration of presidential leadership. God help us if this man is ever commander in chief and responsible for defending the nation.

Yep. Bernie is hands-down the front-runner for the 2016 “Sir Robin” award…

Hillary’s the frontrunner. So why are they targeting Bernie, a man of little consequence, who is far far behind and has little or no chance of getting the nomination? Why not target the actual frontrunner? Oh, that’s right she has secret service protection. So we see it’s all for show and not intended to actually accomplish anything. Plus all the protestors are going to vote for hillary anyway.

That’s one thought. I’ve also noticed that they never show up at Hillary’s rallies. Maybe they are plants from the Hillary campaign.
If Sanders gets police to haul them off, Hillary wins. If Sanders is shut down by them, Sanders loses.

I’ve wondered about that myself. There is nothing, nothing whatsoever, spontaneous or organic from the Hilarity campaign. Reaching out to the BLM leaders for this really does appear to be the sort of thing that a Hilarity staffer would do.

See my blog post http://holdingmynose.com/?p=163 for the hidden connection here.

Anyone think Hillary might be behind this? Or is this a case of Frankenmedia’s monster turning on its creator?

Those two options are not mutually exclusive.

Black Lives Matter is still being used as a lever. The GOPe hates Trump, the DNCs (s=Soros) hates Sanders because he might derail Hillary’s train. Hence the lever to pry the engine off the track.

Sorry about this, this comment should have been for n.n below.

Either working for Hillary or they’re going after a soft target. What “white guilt” liberal in the a Bernie Sanders rally could muster the cojones to get up there and toss them off the stage?

Seattle whackjob politics as usual. The city of Seattle is out of control in thrall to these nutcases.

This is why when most candidates slip into town, they privately meet with Bezos and Gates and some other rich libs in Redmond and Bellevue to pick up big fat checks, and then slip back out.

After all, the most prominent pol in town these days is an Indian immigrant/living on husband’s microsoft salary/self-described, avowed Socialist, who’s likely to be re-relected to the city council. I haven’t yet looked at the local rag to see if she was part of this debacle, but would be surprised if she weren’t.

Think what fun they’ll have, bringing the entire federal government to a halt while these nut jobs parade down the aisles in Congress, invade the White House, and shout down the Supreme Court.

All they need are the brown shirts.

That’s a funny one.
Well, no, not really.
It’s not really funny.

Lefties can never stand up to blacks, no matter how ridiculous blacks get.

Not so. They can treat Conservative blacks like road kill. And they DO.

True, but even when they do that, they’re not standing up to blacks, from their point of view. When they vilify conservative blacks, in their minds they’re not attacking blacks, but their Republican massas.

This has nothing to do with “black lives” or any other lives.

This is about a slow roll to anarchy – part of the “fundamental transformation of America”.

It’s a whole lot easier to suspend elections if you can declare a state of emergency, and say that “we’ll hold elections after things settle down enough”… Who would stop something like this from happening? Boehner? McConnell? Ha.

Somebody needs to look into who is funding these people.

It’s still early, but I could see a set of circumstances where Obama decides to run for a 3rd term. I mean, who’s going to say he can’t? Supreme Court?

You created superior classes for political leverage, and now you have to deal with it. How does it make you feel?

Black Lives Matter is still being used as a lever. The GOPe hates Trump, the DNCs (s=Soros) hates Sanders because he might derail Hillary’s train. Hence the lever to pry the engine off the track.

I believe this is going to backfire for the BLM crowd. I think a good many Americans are just tired of the same old rehashing of failed narratives you have Trayvon and his daddy Barack, the Gentle Giant, the Baltimore six non case and the Tensing case that most people know is botched and analysts failed to catch several mistakes confirming Tensings story.I know that these protesters do not speak for all blacks

I have a Much Better and Very Relevant Slogan: