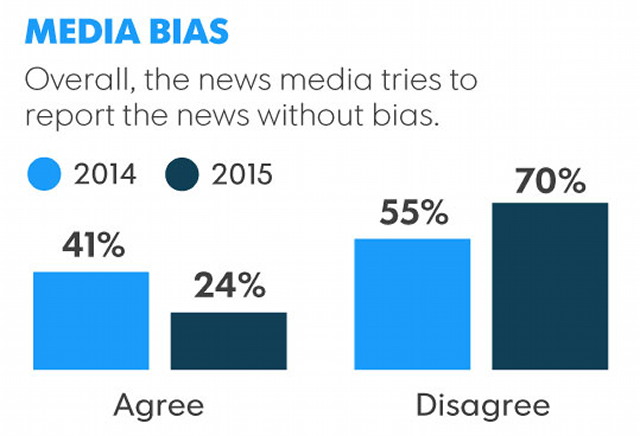 Media bias is no longer a problem perceived only by conservative bloggers. A Gallup poll last fall found 60% didn’t trust mass media but a new survey from USA Today and the Newseum Institute finds that 70% of Americans believe the media is biased.

Clearly, the scandals of Brian Williams and George Stephanopolous played a role.

A new survey by USA Today and the First Amendment Center found that Americans’ distrust of the news media has skyrocketed over the last year, the number of American adults believing news reporting is biased jumping up to 70 percent, while less than a quarter now say they trust the news media.

The 2015 State of the First Amendment Survey released Friday found that only 24 percent of American adults believe that “overall, the news media tries to report the news without bias,” a 17-point drop from last year and the lowest number since the poll began in 2004. More than two-thirds, 70 percent, disagreed with that statement, a 15-point increase since last year.

One positive finding in the survey was an increase in support for the First Amendment.

Americans’ support for the First Amendment rebounded strongly over the past year, a new study says.

Three-quarters of Americans say it “does not go too far” in ensuring Americans’ freedom. That’s a jump from 57% last year after the Boston Marathon bombing in 2013 stirred public debate about the role of social media during a crisis and the media’s use of shocking images, according to State of the First Amendment 2015, a report by the Newseum Institute’s First Amendment Center in partnership with USA TODAY.

A year ago, 38% said the First Amendment goes too far, but the current survey shows only 19% agrees with the sentiment.

In terms of bias, the partisan breakdown is worth mentioning:

Older audiences are more likely to buy into the media’s mantle of objectivity, with 26% of those 50 or older agreeing with the claim. Only 7% of 18-29 year olds agree. Democrats (36%) are much more likely to believe in the the news media try to report without bias as opposed to Republicans (19%).

Other findings in the survey are worth noting, particularly with regard to gay marriage:

*Serving gay couples: Despite advancements in gay rights, the percentage of people who agree that wedding service providers should be required to serve same-sex couples has fallen to 38% from 52% in 2013.

You can read the entire Newseum report here.

The media bias aspect is interesting but the increased support for the First Amendment is remarkable. 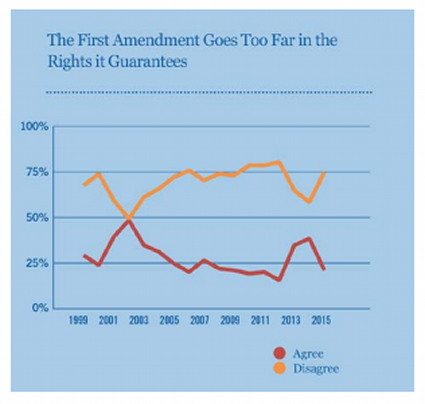 Featured image is a screen cap via USA Today.

No, it means 30% are irredeemably stupid and impossible to educate.

Actually, the 30% were probably the product of public education, which has degenerated into indoctrination.

I would go further. What it really says is that 70% say the media isn’t even making a good faith effort to avoid bias.

Bias, prejudice, rule-of-thumb, and experience are all ways of saying that people generally try to apply rules to the way they think about any given situation, in order to simplify their understanding and abstract some insight. This is part and parcel of how humans think.

Nevertheless, the effort to avoid over thinking when reporting the news is important, because initial reports tend to be selected clusters of facts that are easily construed in multiple ways, most of which will turn out to be wrong. Action on a bad construction of selected facts can lead to disastrous consequences, as we saw in the Zimmerman and Wilson cases, as well as in Baltimore.

The cost of misinformation through the media has run into the many millions of dollars over the last year or so, if one only counts the arson.

Which, to me, means that the news media knows they are reporting one side more favorably than the other, and doesn’t even try to fix it. In their minds, there’s nothing to fix. It’s not a bug, it’s a feature!

Diane Sawyer: “You know, I wanted to sit on a jury once and I was taken off the jury. And the judge said to me, ‘Can, you know, can you tell the truth and be fair?’ And I said, ‘That’s what journalists do.’ And everybody in the courtroom laughed. It was the most hurtful moment I think I’ve ever had.”

This just in:
A new poll indicates that 70% of people trust the Media to delivers the news in a way that they can reliably use in forming their opinions.

Some people are saying that the Media delivers the news in such a way that anyone can determine what the facts are that are being reported.

*I could get a job writing PR releases, Huh?*

to who ever gave me a down ding: IT. WAS. SARCASM.

Get it? I was spinning it like you know they would/will.

“When the truth is found to be lies”

or when it’s found that the Media says it’s the truth but it’s really lies.

Even Orwell couldn’t make this stuff up. Oh wait . .

70% of Americans believe the media is biased. The other 30% are the Democrat base.

The reality is probably scarier than that. Very likely, there are some Democrats who believe the media is intentionally biased … toward the Right.

As conservatives, we see bias in the media nearly always pointing to the Left, to the opposite of where we stand. But there are probably some Democrats out there who are so far Left that even the most left-leaning media group is just too far Right for their tastes.

For all the love and adoration she gets from the mainstream media, if I were a betting man I’d wager Hillary Clinton is one of those Democrats who perceives right-wing hostility coming from CNN, MSNBC, and the New York Times.

Personally I can’t think of a single case in the last 35 years.

The media classically loves the Left/Democrats and hates the Right/Republicans.

The back of my mind wants to think that it’s at least partially because the Left issues its press releases full of politically-correct talking points, and talking points are easy to repeat as “news”. The Right, on the other hand, doesn’t solely rely on talking points for its press releases; the Right operates on facts – which must be independently investigated, corroborated, and verified – and that requires reporters to actually investigate and put real effort into writing their articles.

Why would someone who already naturally leans politically left (as the vast majority of journalism majors do; people who prefer facts tend toward STEM universities) want to work for a living, when paraphrasing or copy/pasting a pre-distributed summary is so much easier?

Plus that 30% has already had their free Obama-care lobotomy!

I think the largest contributing factor, if I could point to only one event carrying the load for explaining this change in belief, it has to be Michael Brown. It was so obvious that the media was in bed with the “black” side of the issue against a police officer, people were awakened and sickened with what they saw. There have been other events, some related to race, some not, that have revealed the media bias to all but a few braindead libtards, but I think that event was the pivotal moment.

If Hillary Clinton murdered Allen West, they certainly wouldn’t be on the ‘black’ side of the issue.

Most of the nation is with ‘us.’

Guys like Trump have their finger on the pulse of the nation.

On the other hand, guys like Boehner, Prebus and McConnell have their fingers up their anuses.

“On the other hand, guys like Boehner, Prebus and McConnell have their fingers up their anuses.”

On the other hand, guys like Boehner, Prebus and McConnell have their fingers up each other’s anuses.