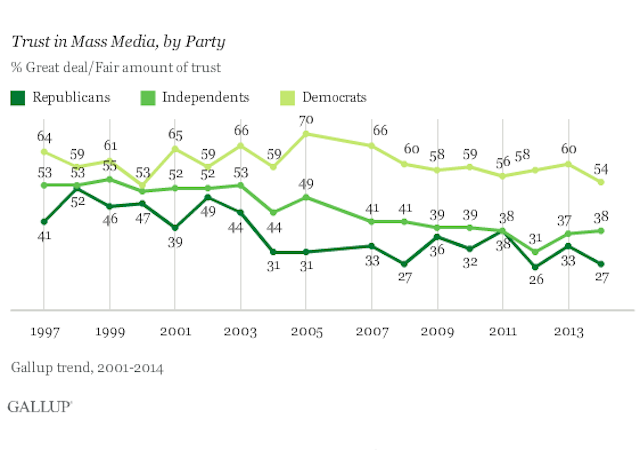 A new poll by Gallup shows that overall trust in the mass media has bottomed out at its previous all-time low of 40%.

Prior to 2004, Americans placed more trust in mass media than they do now, with slim majorities saying they had a “great deal” or “fair amount” of trust. But over the course of former President George W. Bush’s re-election season, the level of trust fell significantly, from 54% in 2003 to 44% in 2004. Although trust levels rebounded to 50% in 2005, they have failed to reach a full majority since.

Americans’ trust in the media in recent years has dropped slightly in election years, including 2008, 2010, 2012, and again this year — only to edge its way back up again in the following odd-numbered years. Although the differences between the drops and the recoveries are not large, they suggest that something about national elections triggers skepticism about the accuracy of the news media’s reporting.

The fact that trust in the MSM dips in election years isn’t a surprise, and it says a lot about the media’s place in America’s electoral process. If only 40% of Americans trust what the media is saying, does the media play as big a role in swaying votes left as it once did? The midterms should be a good indicator of this, although I think “trust” has less to do with overall effect than does the constant bombardment (and and hero worship, in some cases) of one name over another.

Even Democrats are having trouble believing in the MSM, with their level of trust dipping to just over half at 54%. However, there has been a surprising uptick in Americans who believe that the MSM trends “too conservative”:

As has been the case historically, Americans are most likely to feel the news media are “too liberal” (44%) rather than “too conservative,” though this perceived liberal bias is now on the lower side of the trend. One in three (34%) say the media are “just about right” in terms of their coverage — down slightly from 37% last year.

Nearly one in five Americans (19%) say the media are too conservative, which is still relatively low, but the highest such percentage since 2006. This is up six points from 2013 — the sharpest increase in the percentage of Americans who feel the news skews too far right since Gallup began asking the question in 2001.

Is this a “Faux News” thing? Because if not, they’ve lost me.

Democrats — with a small majority of 52% — are most likely to think the media are just about right, while a mere 18% of Republicans feel this way about the news. More than seven in 10 Republicans say the media are too liberal.

What this tells me is that a lot of Americans, in general, think that the MSM is mostly garbage and not to be trusted, no matter who is sitting in the chair.

Gallup pollsters predict an increase in trust in 2015, but also say that this small uptick won’t affect the general trend of eroding confidence in the product the MSM is selling. Whether or not this shift in trust will affect actual votes in the midterms and beyond remains to be seen, but if this trend continues, conservatives will need to invest more heavily in their own sources of news and commentary, and hold those sources accountable for the information they provide.

I only trust news sources that confirm my already-held biases.

Gus! So you are back as another of your various suck puppets!

But you did inadvertently state a true fact. You never read out of your moonbat bubble, and…as we’ve demonstrated MANY times…you really don’t read at all.

“I believe everything I read, and that makes me a more selective person.”

Glad to hear you admit it.

The 40% that may trust Ass Media, oopps mASS Media, just adore Vladimir Today. But then, we (the USA) have Barry Today. Umm, is that redundant?

The problem is that while most people know the State Media lie, they don’t know the extent of the lying.

If people, for example, have no idea about the details of Fast and Furious, even if they think that the media is lying when they proclaim Obama innocent, how does that translate to any action?

If the facts were out there, Obama would have already been impeached or resigned….and this is just one of his scandals…

I’m afraid the “no information” voters don’t think the “media” lies – rather they probably think just the media they do not agree with lies.

For years and years I hear the deranged, lie-miester Leftists deride Rush for his lies. However in 2008 when it was so easy to observe what a huge FAKE Obama is and how much in lies the “big media” press and networks were pushing to cover up for him…well then I checked out Rush.

I found he was straight on and a truth teller. Oh he’s not above baiting the lie-stream media and of course they hate him the more for getting their goat – Obama. LOL

I only read the comments . If no comments are there I don’t even bother . Why should I be interested in just one person/ outfit’s viewpoint?

Not A Member of Any Organized Political in reply to BannedbytheGuardian. | September 17, 2014 at 7:00 pm

You mean sort of like reading the WORST Reviews on Amazon First?

“If only 40% of Americans trust what the media is saying, does the media play as big a role in swaying votes left as it once did?”

I think that’s why the media, more and more, relies on *not reporting* inconvenient news. Conditioning the electorate through omission can be as effective as doing so through outright propaganda.

plus they have been relying on massive election malfeasance I think – in my opinion, from what I have personally observed at polling places, etc……

Another Alternate headline: 40% of Americans Are Gullible Patsies.

What’s there to trust?

I used to work at a newspaper. I predict that they will be alarmed by these results and will do much deep introspection about what needs to change to win people’s trust.

They will conclude that the answer is to be more liberal (though they won’t use those words).

What is most shocking to me about this graphic, is the almost complete trust of the media from Democrats in the years leading up to the 2008 election, followed by another peak going into the 2012 election. Hopefully the past 2 years have taught them something.

The explains why Obama gets always with everything. If trust in mass media is as high as 40%, and you add to it all of those who trust the other left-wing sources instead ,it explains why the IRS has still not been forced to approve Conservative groups – which will likely cost us the Senate.