I knew that Hillary was going to have a Blumenthal problem for her 2016 campaign.

But I expected that the problem would be Max Blumenthal, son of close Clinton advisor Sidney Blumenthal.

Max, the virulently anti-Israel activist, has been the subject of much controversy because of his penchant for vituperative and outlandish attacks on Israel, not the least of which was his call for Israeli Jews to be indigenized after the end of the Jewish state. See our Max Blumenthal Tag for some background.

The issue with Max was whether Hillary could have Sidney as an advisor given Sidney’s seeming support for Max’s antics, if not his anti-Israel agenda. Buzzfeed reported on the problem back in November 2013, Clinton Adviser Sid Blumenthal’s New Cause: His Son’s Anti-Israel Book….

Max Blumenthal is toxic to any mainstream political candidate. Indeed, he’d be  too toxic even to most left-wing candidates, his anti-Israel venom is so notorious.

Recently, Max and a friend chased a German lawmaker into a bathroom because the lawmaker called them anti-Semites: 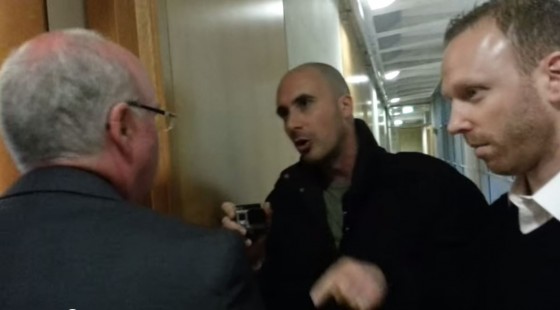 First, the latest batch of Sidney’s emails shows that contrary to Hillary’s claim that she just received unsolicited advice, Sidney served a Svengali-like (or is it Rasputin-like) role in Hillary’s foreign policy thinking. Obama told Hillary to stay away from Sidney when it came to foreign policy, but Hillary seemed to be addicted to the long-time Clinton confidant.

In her early months in office, Secretary of State Hillary Clinton was in contact with unofficial adviser Sidney Blumenthal more often and on a wider range of topics than was previously known, a set of about 3,000 Clinton emails released Tuesday night by the State Department revealed.

While Blumenthal’s role as a provider of off-the-books intelligence reports on Libya has stirred controversy, the newly disclosed emails show he also acted as an intermediary with officials involved in the Northern Ireland peace process and shared advice with Clinton on issues from Iran to British politics to how to blame China for the breakdown of global climate talks.

That would be issue enough, given Max’s desire to destroy Israel.

Think of Sidney with President Hillary’s ear, given his acquiescence if not embrace of his son’s politics.

As reported at The Washington Free Beacon, while Hillary was Secretary of State she approved of Max’s polemics in communications with Sidney:

Hillary Clinton praised a book written by the anti-Israel activist Max Blumenthal in emails released by the State Department on Tuesday, garnering Blumenthal his most prominent public endorsement since David Duke’s website gave another of his books its stamp of approval.

“Max is #10 [on the Amazon bestseller list], now ahead of Glenn Beck; #1 political and history book,” wrote the elder Blumenthal.

Clinton replied with a congratulatory note.

“[Max] should be–I just finished the book and it’s great. Congrats to all!” she wrote.

The book Republican Gomorrah is described as a “bestiary of dysfunction, scandal and sordidmess [sic] from the dark heart of the forces that now have a leash on the [Republican] party.”

At one level, there will be some extremists who like the Hillary-Max connection.

But anyone who supports Israel (which is the vast majority of the country) has to wonder and worry about Hillary’s connection to the Blumenthals.

Lovely people, but totally in company with Hellary.

The real question is how many people will ever hear about the Blumenthals?

That partially depends on you.

If you want more people to hear about it, help spread the word. Direct new readers here, post about this on all your social media accounts, drop it in the “tip line” boxes at every media outfit you can think of.

Everyone has access to the tools to be a force-multiplier and help get this information out. It’s up to us as individuals to use them.

What problem doesn’t the corrupt old crow have?

Max is somewhat more than your run of the mill insane Israel hater. He himself admits he’s a violent antisemite who openly endorses the extermination of (other) Jews. David Duke and the Iranian government, Hezbollah and the worst of the worst of the UN are his biggest fans.