Obama’s Continuing Delusions: “Closest thing to a Jew” in White House, ever!

Obama’s Continuing Delusions: “Closest thing to a Jew” in White House, ever!

Fantasy-based statement may be response to plummeting poll numbers!

What is the line between political hyperbole and utter fantasy?

Whatever it is, President Obama has completely crossed that particular Rubicon. I recently noted that his assertions that America has become more respected internationally under his watch were not quite based in reality.

Now, it appears he has delusions regarding his faith:

Speaking to JPUpdates.com, top Obama confidant David Axelrod described a moment where the president expressed exasperation to him over being derided as anti-Israel by some.

“You know, I think I am the closest thing to a Jew that has ever sat in this office,” the president claimed, according to Axelrod. “For people to say that I am anti-Israel, or, even worse, anti-Semitic, it hurts.”

Given President Obama’s treatment of Bibi Netanyahu over the years, and the troubling deal with Iran that my colleague David Gerstman reviews, I must admit to being a bit perplexed.

However, because I am Catholic, maybe there is something I missed??? So, I went on a quest for information.

Perhaps it started in 2008, and his warm relationship with Chicago area Jews:

Quite a few of Barack Obama’s “friends from the past” have popped up recently. It’s doubtful whether he even knows their names, but in the Chicago Jewish community many people really are long-time friends of the president-elect. Some of the older people in the community say that they “raised him,” while others half-jokingly call Obama “the first Jewish president.”

However, his approval rating among American Jews has declined since then, and it is at a dismal 15% among Israelis! 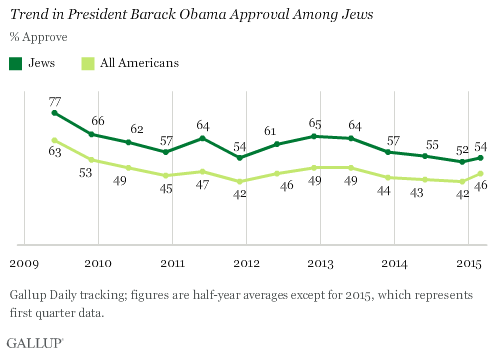 Still, maybe I am missing something? As progressives are very big on “consensus”, I thought I would ask my Jewish friends for their opinion of Obama’s statement.

Roger Cohen, who has assisted me in promoting the realities of climate science, had this observation:

Well, this is not a surprise since he considers himself the embodiment of Abraham and Moses, with a strong dose of Lincoln and Reagan as well. No revered icon is safe!

A long-time friend of mine, Liz Schiffer Trombley, agrees:

I’m Jewish, and the only person close to being a Jew is another Jew. That was a silly thing for him to say. Anti-semitism is awful, but having him say that certainly doesn’t change anything…..it was a bizarre statement!

Well, I’m not sure I even understand what that means. But perhaps the judgment of Israelis, who 6 million of them are Jews, have a pretty good idea of what a Jew is and, more importantly have what a good idea of what a friend is…The overwhelming majority of the Israelis know that this president has been probably the least favorable to Israel of any in Israel’s history and at a moment where Israel’s existence is actually in question.

So, with this consensus, it demonstrates “incontrovertible” proof that Obama’s assertion about being the “closest thing to a Jew” who has ever been POTUS is not grounded in reality.

Why did he say it? Perhaps because he is peeved that he is not popular anymore? Obama is looking to blame someone, so Axelrod floated a trial balloon during the interview that is the source of that presidential quote.

Axelrod suggested that not only is Netanyahu to blame for the bad relations between the two executives, but Axelrod also blames Netanyahu for causing some people to view Obama as not only anti-Israel, but anti-Semitic as well.

…The political operative, Axelrod, went on to attack Netanyahu’s integrity not only in his dealings with Obama, but as the leader of Israel.

I asked another Jewish friend, Alan Rockman, who he thought was the “most Jewish” of our presidents.

Lincoln was VERY close to the Jewish community and felt a kinship with them, so I’d say he was. [George W. Bush], unlike his daddy, also respected and liked Jewish Americans – even if they didn’t like him. A lot of folks like Truman because he recognized Israel and fought for Jewish emigration to Israel. Believe it or not, I’d put Nixon up there because despite those tapes its deeds that count, and he saved Israel in the 1973 Yom Kippur War.

As a Catholic, I am going out on a limb to make a prediction. When Pope Francis comes to America this September, Obama will ask to be canonized. The rationale will be that he is, “the closest thing to a saint that there has ever been in the White House.”

Look, he’s got the halo to prove it!

To: His Infantile Majesty

Subject: “Closest Thing to a Jew”

This WASP Goy, with long experience/exposure amongst ‘The Tribe’, has one comment, Sir: Oy…!

I know what I would like to see circumcised, but I bet he doesn’t have one. Then again, he is screwing Israel every chance he gets.

He is quite correct. He is the closest thing to a (specific) Jew as president; assuming that specific Jew was Karl Marx.

The level of bull crap coming out of Obama’s mouth and the WhiteHouse in general is rising faster than a Texas river during a torrential downpour.

I think the sub-text is he’s confessing he’s not African-American, neither African, nor American!

These are not signs of delusion. These are marching orders for the American liberal media, agendic themes they are to repeat and support in service to The Obama Legacy, and to a lesser extent, in support of the Dems in general for 2016.

Obama has made several of these outwardly laughable claims recently – America is respected around the world again due to Obama, the economy is rocking due to Obama, Obama has a core principle to never be divisive, etc.

Review the liberal media and you will see they are, in fact, putting out articles and cable news stories that support in whole or in part all of these laughable claims.

I’m reminded of the idea that Soviet propaganda was not simply intended to sell a false narrative, but to destroy the self-respect of the people who heard it.

The idea being that the lie was apparent and so apparent as to require that accepting it meant that you surrendered any personal integrity…any free will.

It also creates a distraction from the real issues and problems. Obama has successfully gotten the MSM, of course, but also the conservative blogosphere discussing how Jewish he is or isn’t. It’s meaningless, but a great diversion.

If we do not laugh, are we still human?

But all the CrimSM’s kw-towing to the false god Baal will not save them and their rapidly dis-appearing jobs.

When he is canonized in real time by Francis, he will simultaneously be a Saint, the 12th Imam, and near-Jew. It doesn’t get any better. Pass the popcorn.

I just wish he were a 100% genuine All-American Boy. No other accolades needed.

Mystery of why Sweet Loretta went after FIFA (with minimal ties to the USA) is solved:
trying to be hailed as the world’s fearless policeman w/o any risk.

Obama can’t even tie with a broken clock for telling the truth.

At least a broken clock is correct at least 2 times a day.

Hey, Obama’s a direct descendant of Adam and Eve, so of course he’s one of a tribe! 😉

You’re confusing Adam and Eve with Stanley Ann and the Devil.

Obama is every man, woman, and child… and Jew, too. A figment of his narcissism.

The “closest thing to a Jew” wouldn’t be backing the Muslim Brotherhood as a “moderate” alternative to ISIS and al-Qaeda.

I’m sure there are a lot of people here and in Israel that would love to see al-Chicagi canonized – preferably at the end of a 155 howitzer.

There’s actually some truth to his claim – he almost certainly does not believe in the divinity of the central figure of Christianity, although that may reflect some Islamic religious classes he took, and he has attended numerous Passover Seders of sorts since 2008, and even had his daughter ask the 4 questions

Mr. Obama is believed to be the first president to host seder dinners at the White House. America has not had a Jewish president.

And Michelle even has a cousin who is a (converted) Reform Rabbi:

SO he has a reason for feeling this way. He may indeed, be closer to Judaism, in his true religious feelings, than eotehr Islam or Christianity.

But that doesn’t make his actions, or his judgement, correct, and his “near-Judaism” isn’t correct either. I mean, his daughters should not be asking the 4 questions.

I’ve said this elsewhere, but maybe we should give president Barry a break on this one, since Slick Willy already snarfed up the title of “first black president.” I’m guessing Barry thought this would make a nice consolation prize after the Copenhagen snafu.