Pope’s deputy now comments on the need for eco-encyclical 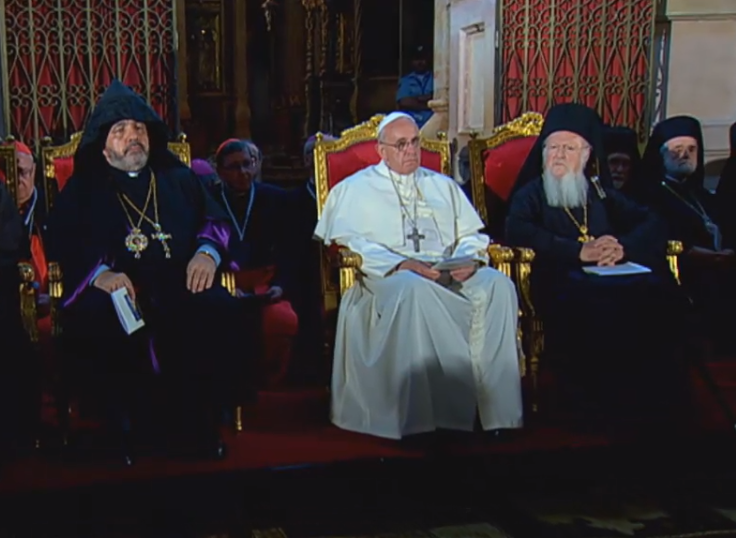 One sign that Pope Francis’ encyclical on climate change may be creating a small storm of controversy within the Vatican is that high level officials are now explaining why it is needed.

This week, the pope’s deputy released a statement about the upcoming publication:

A new development model is needed to combat global warming, one that marries economic growth to combat poverty with a sustainable use of resources, Pope Francis’ deputy said Wednesday.

Cardinal Pietro Parolin, the Vatican secretary of state, said both political and economic commitment will be required to ensure the Earth’s health for future generations.

Parolin’s remarks came in a message Wednesday to a conference of business and church leaders on how sustainable actions can drive the economic growth needed to lift people out of poverty. It’s a theme that Francis is expected to explore in his environment encyclical, which is due in the coming weeks.

“When the future of the planet is at stake, there are no political frontiers, barriers or walls behind which we can hide to protect ourselves from the effects of environmental and social degradation,” Parolin’s message said. “There is no room for the globalization of indifference, the economy of exclusion or the throwaway culture so often denounced by Pope Francis.”

Parolin’s intervention was a clear indication that Francis endorses economic development proposals which help the poor but use new, clean-energy, low carbon and efficient technologies.

If Vatican officials dig a bit deeper into the realities of policies that marry economic growth to green technologies, they will realize it is not exactly a match made in heaven.

Yet most Westerners still want to focus on putting up more inefficient solar panels in the developing world. But this infatuation inflicts a real cost. A recent analysis from the Centre for Global Development shows that $10 billion invested in such renewables would help lift 20 million people in Africa out of poverty. It sounds impressive, until you learn that if this sum was spent on gas electrification it would lift 90 million people out of poverty. So in choosing to spend that $10 billion on renewables, we deliberately end up choosing to leave more than 70 million people in darkness and poverty.

Furthermore, there are a plethora of taxpayer-backed green energy companies that have failed, leaving a combination of the politically-connected who have gotten substantially richer and unemployed workers struggling to find new work.

I have had the privilege of corresponding with a team of brilliant scientists who are devoted to informing the public about the realities behind climate models. Roger Cohen, RWC Fellow American Physical Society, had this assessment of the deputy’s statement:

“They have it backwards of course. The fact is that access to cheap energy drives economic growth and leads to better health and material well being. The Church would rob the remaining billion poor in the world, who do not even have electricity, the opportunity to progress as we all have. This is a truly disastrous posture for the Church to take.”

Interestingly, Pope Francis is not the first one to address the ecology. Pope John Paul II in 1990, warned in a speech about the ozone layer and the greenhouse effect because of”industrial growth, massive urban concentrations and vastly increased energy needs.”

I suspect it’s less of a miracle than it is that the dire warnings about the ozone hole were also fallacious. I hope that the Pope annuls this proposed marriage between politicized science and his goals for helping the poor.

the Pope & the Church have no business getting involved in this…

if he wants to set an example, he can sell off all of the Church’s worldly possessions, and use the proceeds to help the poor.

until the Church is willing to walk the walk they’re always talking about, they can just go pound sand, as they lack the moral authority to lecture others from their lush position in life.

Not surprising from someone who grew up with and endorsed the Marxist-inspired liberation theology of Latin American. Francis should stick to saving soul — but his gigantic ego would not allow him to miss all the accolades from his fellow travelers. He has been *the worst* Pope in my lifetime — and he is setting the Catholic Church on the path to extinction.

I’m afraid this Pope will leave a legacy of terrible damage behind, just like Pres. ScamWOW.

What a shame, after all the good the Church has done in recent decades.

You would think that the Church would give up on trying to weigh in on science. The Galileo experience should have cured them.

So the Pope wants to join hands with the atheist Marxist Greens, under the phony battle against “the globalization of indifference”. How in the world does indifference organize? Is there an indifference.org with big donors?

85% of the world always has been, always will be indifferent to these urgent but phony global initiatives. But the 2% radical nuts will jam them through, and the 0.01% Marxist elite and UN criminals will be enriched.

Obama issued moratoriums against drilling in the gulf, sending our rigs to Brazil where he grinned and told them he wants US to be their biggest customer. Besides the oil and natural gas, the US is the Saudi Arabia of coal, and we need to use it as a powerful tool, selling it to help free African nations so they can develop, with US as allies, instead of the Russians.

Ever since Hillary’s reset button, evil empire Russia and their Muslim client states have been gaining ground as we surrender it. Obama stands down against foreign enemies, but stands up against capitalism domestically. Even the pope now is joining with the commie green fraud. ManBearPig is alive.

Oh, good. So now it’s official; when it comes to AGW, “the science religion is settled.”

it’s beyond me why anyone would pay very much attention to the opinions of these men, sitting on golden thrones, wearing those silly, medieval costumes. all they need is bright, red clown-noses to complete the look.

It appears that the person who said, “Everything is political” is right these days. Truth has been forsaken for vox populi vox Dei.

Dope Francis will do as much damage to the Papacy as Pope John Paul II did to raise its prestige.

What a crazy time in history: it’s becoming a perfect storm of negatives.

Speaking of which, back at the ranch, we tolerate twp cowardly, ball-less morons running the GOP Senate and House. Had we not, we could have two people in there who just might save us from the disaster that is coming.

This Jesuit educated and weekly Mass going Catholic regards the apparent intention of this Pope to make a religious matter of his false “science” to be the worst example of ignorant Vatican meddling since Galileo. I am ashamed.

The Church should stick to lifting poor souls from spiritual poverty and butt out of the narcotic of global Marxism as the means to cure economic poverty. The Catholic Church has sponsored a lot of grinding poverty in Latin America.

The Church if Rome has itself a Communist pope, as if Rome didn’t have enough problems. Francis would do well to rid the Vatican of homosexuals and pedophiles, correct the many unscriptural errors in Roman theology–Mariolatry and the celibacy of priests, for example, read his Bible, and set about fulfilling the mission of the Church Universal. If he does not, he, his ilk, and the Church of Rome might become like the Church of Laodicea.