America has become “the most respected country on earth” under his watch!

As I was joining a friend for lunch at a local craft beer establishment, I caught this bumper sticker that I can’t help but share with you. 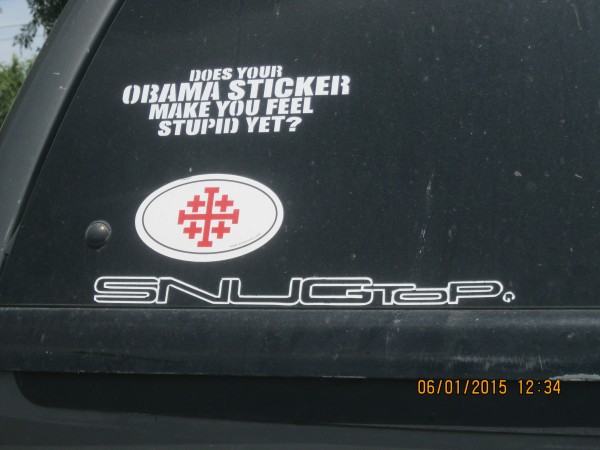 Today, this sentiment is even more true.

You may recall last week that a Fox News pundit referred to President Obama as “delusional” over his claims that climate change was a national security issue.

Obama’s most recent statements clearly show he has left the junction of reason and sanity:

In a a question and answer session that took place, the president was asked how he would like the world to remember him. He said that he wants Americans to know that America once again became “the most respected country on earth” under his watch.

“People don’t remember, when I came into office, the United States in world opinion ranked below China, barely above Russia,” Obama said. “And today, once again, the United States is the most respected country on earth, and part of that I think is because of the work that we did to reengage the world and say that we want to work with you as partners, with mutual interests and mutual respect.”

Here are a few highlights from the “respect files”:

* ISIS says its goal is to kill Obama and slaughter Christians.
* Russian President Vladimir Putin mocks President Barack Obama for criticizing Russia’s role in the ongoing crisis in Ukraine.
* Russia conducts a nuclear bomber flight near Alaska.
* Barack Obama is ridiculed by Chinese state media, who have also mocked his “Yes we can” mantra.
* The US expects to face down China in the South China Sea.
* While proclaiming a great new era in relations with Latin America, some notice that the administration has not spent much time nor energy there over the past six years.
* The Indians label Obama with “underachiever” label.

And, really, who could forget the anti-Obama video from Egypt, produced in response to his support of the Muslim Brotherhood?

The following quote from the “Harry Dresden” book series seems most apt:

If he were up here in Ontario, I would “Form 1” him and he would be carted off in a straitjacket. This is part and parcel of his Narcissistic Personality Disorder, but his delusions are characteristic of psychosis.

Obama knows that is a lie.

Lies are what those people who are MNPD always do. Dven partial truths are perfect lies (pointed out in folk sayings similar to that in cultures around the world),

Obama knows that is a lie.

I’m sure Obama has some kind of poll results to prove it.

What’s the history of this poll?

Europeans generally give the U.S. high ratings, especially in Italy, where 76% now have a positive view of America, up from 74% last year and 53% in 2007.

I think Obama thinks what he said is merely an exaggeration.

It probably reflects opinion about the Iraq war. All those people who thought there was something wrong with it, now no longer do not approve opf the United States.

…but you can see the raw results on this page.

The low point was when Bush was president. It went up immediately in 2009, but dropped somewhat since then.

Opinion of the U.S. did decline in both Pakistan and China between 2007 and 2013, but has gone up everwhere else they polled more or less, including Israel)

It still was 90% favorable among Jews in 2013, while the favborability among Arabs was 42%.

It is truly frightening that someone so completely delusional is in charge of our government. May God help us.

The little poser puppet is:

2. Progressing nicely with regard to achieving third world status for the nation.

Responsible authority such as congress critters will:

The Obama Stupid sticker is WHITE! So clearly it is racist. Or, at the very least perpetuates White Privelege.

“There are men running governments who shouldn’t be allowed to play with matches.”
Will Rogers

He ain’t crazy. This is pure politics. This is Obama notifying the media on how they will report on one aspect of his legacy from here on out. Expect interviews in the NYT, LAT, MSNBC, etc., with foreign leaders chosen because they’ll echo Obama’s wonderfulosity. He’s building his legacy, one lie at a time.

Also expect those propaganda organs real readership and subscriber base to drop to near zero.

You do know they’ve been giving away tons of free publications so they can quote higher “readership’ rates don’t you?

Isn’t that outright fraud and embezzlement of their advertisers?????????????

Rush is on the radio now saying exactly what I said above.

Likely the fraud is against the US Treasury via misuse of the tax code and the only question is whether there is a conspiracy to defraud or just your garden-variety improper deduction fraud.

“People don’t remember, when I came into office, the United States in world opinion ranked below China, barely above Russia,” Obama said. “And today, once again, the United States is the most respected country on earth, and part of that I think is because of the work that we did to reengage the world and say that we want to work with you as partners, with mutual interests and mutual respect.”

We know this to be a scientific fact, because “all leading opinion pollsters of any reputation” have shown it in scientific polls. Scientifically.

And Valarie Jarret sings him to sleep every night with that “data”.

What took you so long to comment, Rags? I thought you would be all over this asinine comment by Barry. Taking a nap, or out back taking in some target practice?

Massive Respect for him around the world??!!!!!!

Let’s see, shall we…From a president who’s word was kept, who’s honor was without question and who backed his country’s seriousness with armed might…To this scrawny, tepid, lying pipsqueak who can’t be taken seriously by any real or potential enemy. Nor trusted at all by our friends.

Also, we now how hovercars and 5,000 channels of alien day time programming. Thanks, Obama!

The icing on the cake:

“President Barack Obama apparently thinks he’s the closest thing to a Jewish president America has ever had.

Speaking to JPUpdates.com, top Obama confidant David Axelrod described a moment where the president expressed exasperation to him over being derided as anti-Israel by some.

“You know, I think I am the closest thing to a Jew that has ever sat in this office,” the president claimed, according to Axelrod. “For people to say that I am anti-Israel, or, even worse, anti-Semitic, it hurts.”

During Obama’s tenure, U.S.-Israel relations have fallen to their lowest point in decades.”

“You know, I think I am the closest thing to a Jew that has ever sat in this office,” the president claimed, according to Axelrod.

Has any other president regularly attended a Passover Seder (of any kind?)

Did any other president ever have his child ask the 4 questions at a Seder??

So I suppose he’s right.

Not even Abraham Lincoln did that. Alexander Hamilton did learn to read Hebrew as a child, but he was never president.

Those are your criteria? Perhaps the Jews deserve Obama and whatever he does in the Middle East after all.

U.S. Grant did address the opening service of a (Reform) congregation in Washington, D.C. in 1876.

“President Grant, his son Ulysses, Jr., Vice President Ferry, Rev. Dr. J.P. Newman, … and other prominent personages came in and were assigned to seats near the ark, all retaining their hats, as was observed by the congregation.”
The Daily Critic, June 10, 1876

“This is the first instance in the history of American
Judaism, of the President and Vice-President of the United States attending conjointly the consecration of a Synagogue, and it is worthy of record on this Centennial year of our beloved country.”

Delusional is an understatement. He lives in an alternate reality.

….and the launch codes are in his hand; his finger is right on the Big Red Button 24/7/365. (The Nukes launch button for any yoots out there who don’t know what that is.)

Then the New Reality can be issued in. Utopia at last!

The last time we were ruled by a delusional king, we ended up fighting a revolution to regain our freedom.

You may recall last week that a Fox News pundit referred to President Obama as “delusional” over his claims that climate change was a national security issue.

Doesn’t anybody know that?

Of course, Bill Clinton knew he was lying.

He was even lying abouyt maybe when he said it first.

(He claims he told Chinse President Jiang Zemin, in their first meeting, in November, 1995, that the biggest security threat that China was to the United States was the environment,and that this idea was new to the Chinse government leaders.

Bill Clinton has said this any number of times. Obama is only echoing Bill Clinton.

Great post, Leslie! Obama is totally out of touch with reality, or anything resembling reality. Here’s a dose of reality, he’d do well to consider: