$60 million to Minnesota in one month 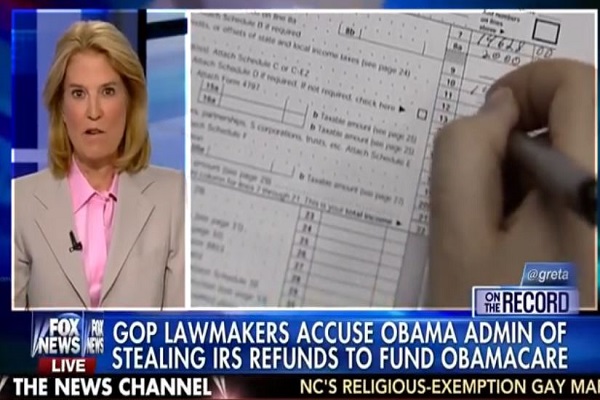 Here at LI, we’ve covered numerous aspects of ObamaCare from its questionable passage to legal challenges to various executive branch “tweaks” and shady exemptions to the devastating effects the law has had on millions of Americans.

Now, apparently, the executive branch is going above and beyond the law in its efforts to keep the unpopular law afloat despite ample evidence that it’s a disaster.

Obama has repeatedly shown that he doesn’t think he needs Congress’ approval to change the law, and now he’s being accused of funding parts of it without Congressional appropriations.  Funds set aside specifically for tax refunds owed to hard-working Americans are being used to subsidize the Basic Health Program associated with ObamaCare.  According to Paige Winfield Cunningham:

Leading Republicans are charging that the Obama administration is illegally funding yet another part of Obamacare, in addition to the part of the healthcare law over which House Republicans are already suing.

Their latest criticism centers on the Affordable Care Act’s basic health program, an optional program for states that started this year, in which low-income residents can get subsidized, state-contracted health plans instead of buying them through the new online marketplaces.

The administration is funding the program illegally by using a pot of IRS money used for tax refunds, says Rep. Peter Roskam, R-Ill., who leads oversight efforts on the House Ways and Means Committee.

The law authorizes that money can be used for the law’s insurance premium subsidies but not for the basic health program, he argues. He says using that funding would require approval from Congress since it is not authorized within the text of the law itself.

So far, according to Roskam via The Weekly Standard, “the administration has paid out $60 million to the state of Minnesota, and that’s just for one month.”  Why Minnesota?  Because it’s the only state to set up a basic health program (so far).

Minnesota is the only state that has set up the basic health program, although New York is taking steps in that direction. If states opt in, the federal government would cover 95 percent of the subsidies that enrollees would have otherwise collected in the marketplaces, although it’s not allowed to cover administrative costs.

Aides said they only recently discovered how the administration was funding Minnesota’s program, through looking at the state’s first-quarter payment this year.

Prodded by Roskam at a hearing Wednesday, Burwell acknowledged the basic health program payments are coming out of the IRS fund but said “tax credits for programs” aren’t part of the discretionary funding that must be approved by Congress.

“What extra-constitutional authority are you invoking that allows you to spend money that has not been appropriated?” Roskam asked her.

Using a fund that is set aside to cover money owed to Americans seems intentional.  After all, Obama and his media enablers will claim—however illogically—that the evil Republicans are trying to stop you from getting your income tax refund. This Chicago-style tactic would be nothing new to the Obama team, who intentionally caused the most public suffering they could during the 2013 government shutdown and placed the blame with Republicans.

The Obama administration is probably counting on Republicans to avoid this particular battle like the plague.

“The Obama administration is probably counting on Republicans to avoid this particular battle like the plague.”

It’s a safe bet to count on Republicans in congress avoiding ANY battle.

Why shouldn’t they considering they are only Democrats in GOP clothing.

Republicans are good at keeping the seat warm. A bigtime GOP consultant was on TV, crowing that Republicans wanted the Dems to pass Obamacare because it’s so unpopular it will guarantee a GOP sweep in November.

OK, then what? You’ll roll it back – like you’ve rolled back all those other unsustainable entitlements premised on cobwebbed actuarial tables from 80 years ago? Like you’ve undone the federal Department of Education and of Energy and all the other nickel’n’dime novelties of even a universally reviled one-term loser like Jimmy Carter? Andrew McCarthy concluded a shrewd analysis of the political realities thus:

“Health care is a loser for the Left only if the Right has the steel to undo it. The Left is banking on an absence of steel. Why is that a bad bet?”

There are states that already had health care for low income residents before obamacare became law.

“Obama and his media enablers will claim—however illogically—that the evil Republicans are trying to stop you from getting your income tax refund.”

That’s a good one, especially in light of his admin’s outright theft of these refunds in order to fund a part of his signature legislation. God I wish the republicans weren’t so spineless, Obama would at least have to be a lot more careful about his illegal power grabs if they would simply stand up to him more often and not back down!

Why would Obama NOT fund Obamacare in any fashion he choses? Who is going to stop him? Certainly not the invertebrate Republicans in Congress since they refuse to use the power of their majorities. Obama is as unconstrained today as he was when Pelosi and Reid ran the Congress. Same insanity, same cast of characters.

Yes, and we Republicans find more ways to give obama more executive power.

NOBODY…ever…seriously believed this atrocity would do anything that Barracula promised. Certainly HE didn’t.

You have to remember what it’s REALLY for, and what it REALLY was designed to do, and that it has nothing to do with “health care” except incidentally.

Everything is going as I have foreseen…

You are right. Just as all this “free trade” stuff is not about free trade.

WAIT. WHAT?
Was this basic health program in the original disastrous bill?
If not then is obama up to slimy tricks?
AND doesn’t this cover him if the SCOTUS rules against subsidies paid through Federal Exchange?

One more Q
How can thi be paid from IRS refunds and the IRS pay all the refunds owed?

“WAIT. WHAT?
Was this basic health program in the original disastrous bill?”

Yes, it was in the original bill/law and was set to take effect this year. They like to spread out the disaster so that is seems less onerous.

“If not then is obama up to slimy tricks?”

“AND doesn’t this cover him if the SCOTUS rules against subsidies paid through Federal Exchange?”

The Basic Health Plan is not the same as subsidies; it seems more like a Medicaid-type thing and is treated differently in the law.

“One more Q
How can thi be paid from IRS refunds and the IRS pay all the refunds owed?”

This is where Republicans will come to the rescue (just as they are planning to keep ObamaCare subsidies in place if the Supremes rule against Obama). The Obama IRS will claim they don’t have any money left for refunds, and the Republicans will appropriate more money for that to avoid “looking” bad and being held responsible for Americans not getting their refunds.

In short, Congress didn’t appropriate funds for this program, but ultimately, they will because of this illegal use of appropriated funds by the IRS.

People, people, people, settle down. There’s been no crime, no theft. These Republicans are all just over reacting and attempting to appeal to their racist base who would have the poor, the needy and people of color in Minnesota suffer and die without the medical care that Obama, himself, provides. Let me explain…..
It came to the administration’s attention early in the tax year that many people forgot to purchase health insurance in accordance with ObamaCare’s individual mandate and the IRS’s explicit dictate of “Personal Shared Responsibility” (to each according to his needs from each according to his ability). Their unfortunate inaction and failure to comply automatically triggered a penalty…eh, tax to be levied against them. And because so many of these tax filers might also neglect to manage their finances to avoid a refund, the administration naturally must withhold, seize, confiscate these refund monies to insure that everyone pays their fair share.
So you see, America, Obama really, really cares and is taking what ever steps necessary to insure, Heads he wins, Tails you loose. /sarc

P.S.
Be grateful that $ 60 million isn’t being used to fund Michelle’s next vacation. It was a toss-up decision.

Add $14 trillion of debt, excessive and unmeasured immigration, selective regulation, and millions of aborted babies, and what do you get? Another day older and deeper in debt, and then some.

And the REpublicans in congress will go, “harrumph!” and return to their naps.

What is this concept of “legality” or “illegality” that you refer to in relation to the regime? I believe those terms are semantically and politically null in that context.

Sir, usually we agree; but this time I believe you have vastly overstated the Republican reaction.

So what is why the “tax refunds” were months late….Because Obama and the Democrats where juggling and cooking the books.

Time to do an intensive and extensive fraud audit of everything IRS – going back to 2008!

The debt sales, foreign and domestic, must not be going well. Perhaps people are losing faith in the full faith and credit of the American people. The immigration, legal and illegal, solution is not compensating for lost forward demand. The people are noticing the effects of unredistributed debt to devalue capital and labor. The secular opiates are losing their potency to suppress reality, integrity, and conscience. They are still reeling from losing Democrat financial interests in the 2008 anthropogenic global financial catastrophe.

That said, beware overlapping and convergent interests. Politics is at best about negotiating a tolerable consensus.

Not to worry, we’ll get the trade act passed and everything will be hunky dory.
By the way while I’m here, I have a bridge for sale, it spans the Pacific Ocean to Japan and China.
It could be a real money maker for you.
Comes complete will toll booths and everything.