Real problems, some created and all exploited. 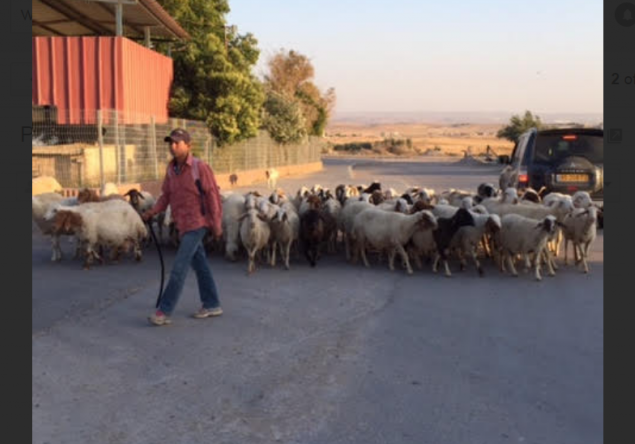 Problems between the Bedouins in the Negev desert area in the south of Israel and the government over redevelopment plans have received a lot of media attention, including at Legal Insurrection:

As with every problem in Israel, there are dozens of Israeli and international “human rights” groups seeking to exploit the issue for a greater purpose unrelated to actually helping the Bedouin. So the media narrative is spun as the bad Jews trying to steal land.

The Israeli side of the story rarely is told in the media. In part that reflects media bias, in part that Israel is not very good at getting its story out.

So during our trip to the south of the country, we met with and toured the area with a local official from the Israeli government ministry which is handling Bedouin redevelopment issues. The official spoke Arabic fluently and was intimately familiar with the Bedouin tribes and culture. (We also were accompanied by our Negev guide, Danny Kella, who also guided us along the Gaza border.) 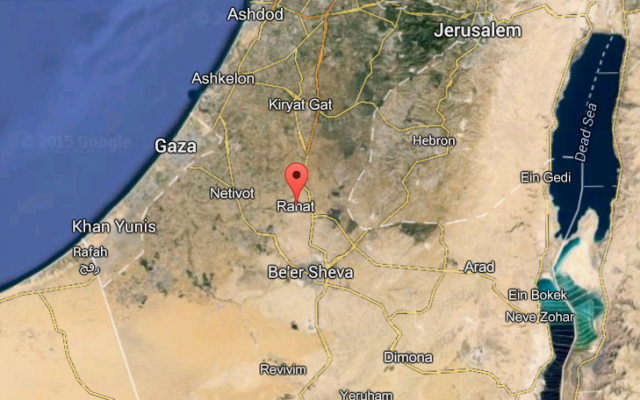 The official was frank in his assessments.  He acknowledged that there are real problems and that the situation has not been handled as well as it should have been. But he also felt that a lot of the problems had causes on each side of the equation and was misrepresented in the media.

Even in the south, as I learned, it is an oversimplification to refer uniformly to “Bedouin,” even though it is common to do so. Tribal loyalty is everything, and Bedouin of one tribe often refuse to live with or interact socially with other tribes. Also, there are farmers (Fellahin) who don’t have the tradition of migration and consider themselves distinct from the nomadic tribes.

Most of the over 200,000 Bedouin live in planned towns. The Bedouin birth rate is the highest in the world, which means that problems that were more manageable a decade or two ago now involve far more people.

The only Bedouin city is Rahat, which has 56,000 people. There are about 30,000 Bedouin who are the subject of the controversy, according to Israeli figures, though some put the number higher. 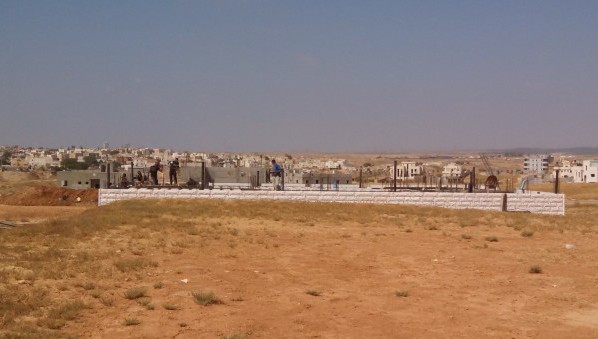 The heart of the conflict is Israel’s attempt to bring organization to the Negev population, including utility services, building codes and education to the Bedouin spread out in hundreds of locations in rundown tents and shacks. A nomadic or semi-nomadic lifestyle is incompatible with a modern state, particularly in such confined space.

So when the Bedouin pitch a tent in a random location, it becomes impossible for Israel to bring services to so many isolated locations. It also has negative environmental impacts, and interferes with other planning projects such as roads.

The government pays people to move and to build permanent homes in recognized locations. We passed by a number of recognized villages where large homes were built with government funding.

There is an element of exploitation at two levels. First, tents sometimes are pitched with the knowledge of where a road is planned, in the hope that the government will pay extra.  Also, false claims sometimes are made as to how long a home or group of homes have been in a location.  We passed one solo hilltop tent/shack, and the official explained that the family rotates having someone stay there; they claim that they have been there for years, but he has satellite images showing that they were not there even a month ago.

Second, international organizations exploit situation to organize protests.  This photo shows a small protest at an intersection, as we were driving by. 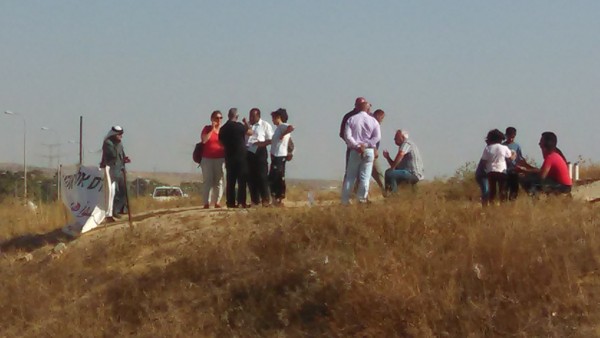 The official, who is very familiar with the cast of characters, explained that the man in the Arab headdress is paid by a foreign Arab gulf state to organize protests, including busing people to the location.  Only one of the participants was a Bedouin, the others were from outside the area.

Sure enough, the organizer’s van was parked off to the right: 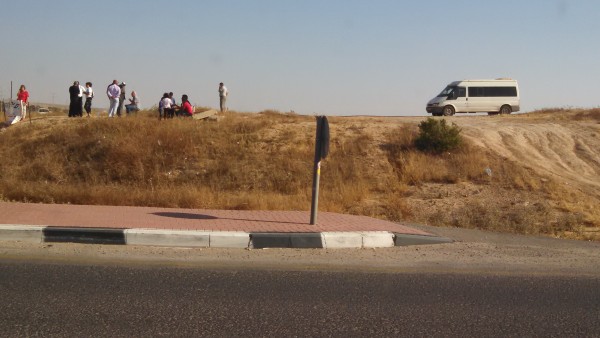 We visited Drejat, one fairly prosperous village of “farmers.” (See Featured Image.) The village is famous because the people used to be cave dwellers; literally. The village got electricity in 2004. 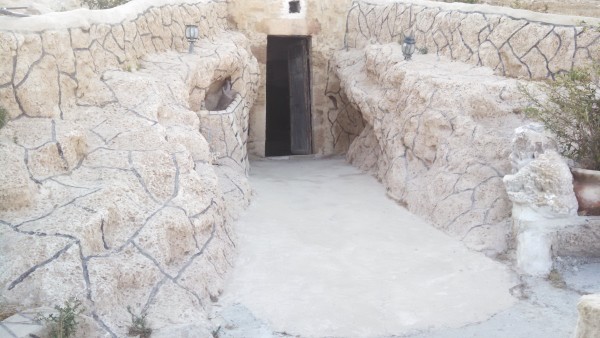 The former cave dwelling in the photo above now is preserved and is open to tourists by appointment: 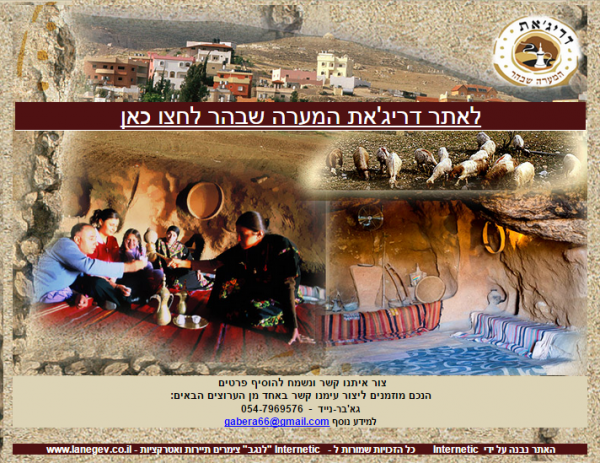 We met the son of the family that owns the cave, and he expressed great pride in all his family had accomplished. They have a modern house now, some of his siblings are at university abroad, and he someday hopes to be a Hebrew teacher.

The large houses in the village were everywhere: 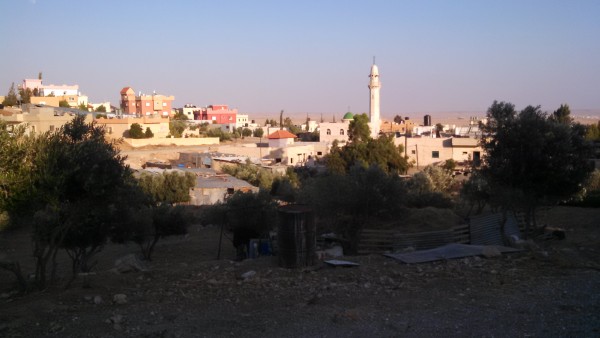 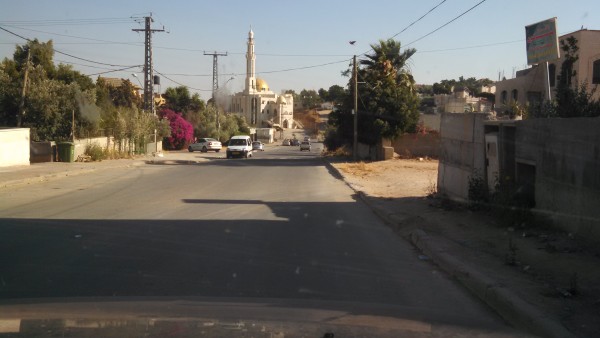 There are four tribes in the village.  We visited the Lakia Women’s Association:

In the 1980s a group of young women from the town of Lakia in the northern Negev got together with the goal of trying to help women by organizing summer camps for children, teaching women to read and write, and more. Gradually their ideas evolved until the Desert Embroidery Project became the flagship of the first Bedouin women’s non-profit organization: The Association for the Improvement of Women’s Status, Lakia. Today the Desert Embroidery Project provides employment and income for Bedouin women based on their traditional skills of embroidery which are utilized at home without interfering with the women’s regular chores. At the same time Desert Embroidery provides women with lectures and trips which broaden their horizons, and expand their social interactions.

The Desert Embroidery Project preserves and develops traditional embroidery skills to empower women to increase their earning power and develop self-confidence. The project has trained over 160 artisans to date and developed over 40 products. A major goal of the project is to expand to the other Bedouin communities in the Negev to help all Bedouin women achieve economic empowerment. 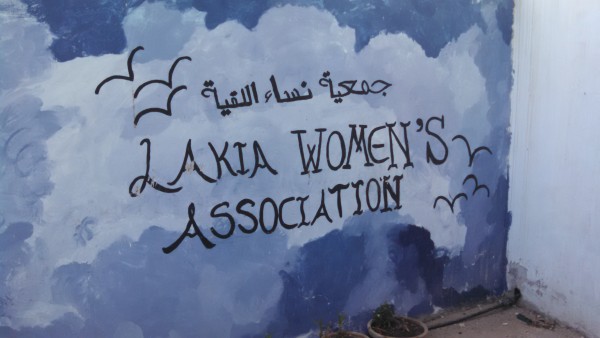 The Lakia Women’s Association Desert Embroidery Project has a website: 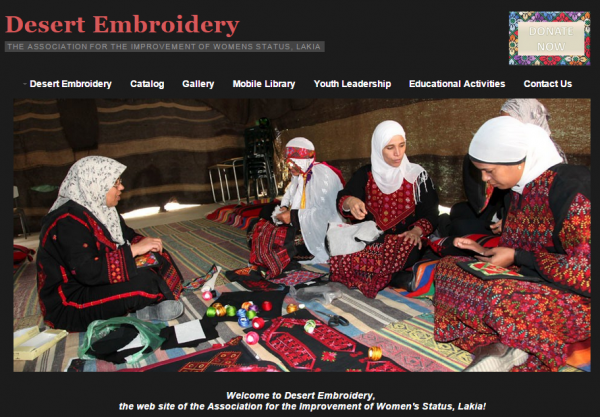 We visited other locations among the Bedoiun, including a local enterpreneur who seems to have his hand in many things, including growing flowers. 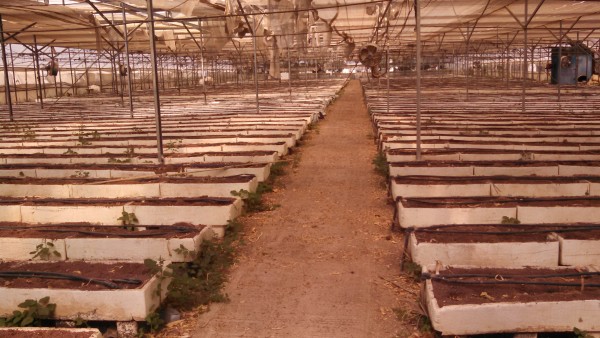 But there are places we could not visit, as the Israeli official explained it was too dangerous even for him. Such are the tensions in some places.

Separately, the next day we were hosted at Ben Gurion University of the Negev, in Beersheva, the largest city in the Negev. There are extensive efforts at BGU to help the Bedouin population, who make up approximately 5-7 percent (a guesstimate given to us by one person) of the student population. There are pre-university courses to get Bedouin students ready for university; the first Bedouin physician graduated the school. As we walked the school grounds there we many Bedouin female students, recognizable by the head scarves. (Almost all of the Arab students at the school are Bedouin, and female.)

All in all, the situation of the Negev Bedouin is both better than presented in the media and by groups with other agenda, but also not nearly as good as it should be. There is a problem with crime in the Bedouin towns, and there are serious issues of how to bring modernization to a pre-modern nomadic lifestyle without causing more damage than benefit.

The narrative is not so simple as presented in the media. It almost never is.

Excellent and even handed reporting, Wm. Interesting how the Arab countries will pay for an agitator but will not help their fellow islamics with housing and education. The agitator should be deported, but then they’d find another one,

The clearest and most detailed explanation of the Bedouin situation I’ve seen. Thanks for the insight. I suspect that one of the reasons that many liberals find this issue so problematic is that they view the Israeli government’s attempt to bring modernity, in the form of utilities and building codes, to the Bedouin as an attempt at Westernizing or “colonizing” them. Then, when the next war with Gaza comes, the same people who are against permanent homes for Bedouin will complain that they have no shelters.