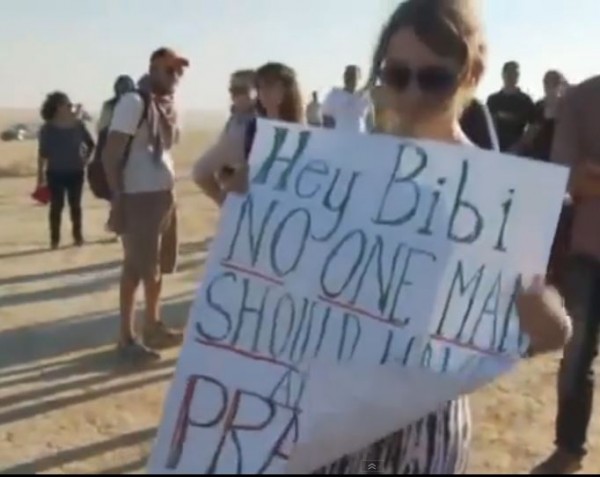 Days of Rage is just about every day in the anti-Israel movement.

Today is was a Day of Rage over an Israeli proposal, still working its way through the Knesset, to relocate about 15% of the Bedouin who live in the Negev Desert from dispersed, mostly dilapidated housing built without permits into newer, more centralized housing also in the Negev.

That plan has sparked the usual cries of Ethnic Cleansing from anti-Israeli international groups and Israeli leftists. In fact, no one is being cleansed. The vast majority of Bedouins will stay where they are, and none will be forced out of the area the Bedouins have inhabited in Israel.

The Day of Rage has not received a lot of attention in U.S. media, or even on social media outside of the hastag #StopPrawerPlan. But not for lack of trying.

Large protests over a plan to resettle nomadic Bedouin Arabs in Israel’s southern Negev desert caused injuries Saturday and led to some arrests as well as condemnation from Prime Minister Benjamin Netanyahu.

Protests focused on a bill that would move thousands of Bedouins into government-recognized villages. Opponents charge the plan would confiscate Bedouin land and affect their nomadic way of life, but Israel says the moves are necessary to provide basic services that many Bedouins lack and would benefit their community while preserving their traditions.

Over a thousand people protested in a Negev village in southern Israel Saturday. The demonstration turned violent when some protesters threw rocks and fire bombs at police and burned tires. Police, some on horseback, responded with water cannon, tear gas and stun grenades, police spokesman Micky Rosenfeld said.

Hundreds more took to the streets at protests held in Jerusalem, Haifa and elsewhere. Police made more than 40 arrests and 15 officers were injured, Rosenfeld said…

The government body dealing with the plan said it calls for the vast majority of Bedouin to live where they are. It said it is investing hundreds of millions of dollars in housing, health, public services and education for the Bedouin.

Officials said in a statement that the body is planning “a variety of rural and urban living options which will allow the Bedouin population to integrate into the fabric of a modern state while preserving their traditions.”

It blamed Saturday’s violence on “extremists, many of whom are not Bedouin” for using the protests to further their own agenda.

Although the Bedouin serve in the Israeli Defense Forces, often with distinction, the Bedouin issue has been usurped by anti-Israeli international groups and celebrities:

In the U.K., musical celebrity Peter Gabriel published an open letter in The Guardian asking the British government to reevaluate its relationship with Israel and to measure U.K.-Israeli dealings through a human rights filter.

“Earlier this year, the Israeli knesset approved the Prawer-Begin plan. If implemented, this plan will result in the destruction of more than 35 Palestinian towns and villages in Al-Naqab (Negev) in the south of Israel and the expulsion and confinement of up to 70,000 Palestinian Bedouins.

Israeli officials are pushing back against the hyperbole.

There are so many lies out there about the #PrawerPlan. We are investing billions to give the Bedouin in the Negev a better future.

#Prawer-Begin plan includes integrated solution of the #Bedouin issue in the #Negev http://t.co/Ijq117G1ZA

The Israeli Ministry of Foreign Affairs produced this infographic: 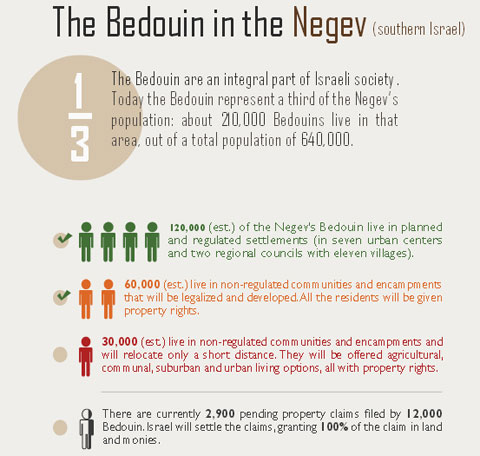 (The Bedouin in the Negev – via Israeli MFA)

From what I’ve learned about the plan, I think reasonable people can differ.

The anti-Israel activists behind the Day of Rage, however, are not reasonable people. (Some tweets via BuzzFeed)

Israel wants to evict over 70,000 PALESTINIANS
Say NO to the Prawer Plan! #StopPrawerPlan #StopIsrael pic.twitter.com/Akr8lDu821

Update: Must read, The blood libel film, which debunks numerous aspects of the campaign not only by international anti-Israel groups but also by Israeli leftists via Haaretz to falsely portray the plan as ethnic cleansing.

Send out a tweet that there’s an Israeli soccer team with a Bedouin mascot.

The generalities of this have bad optics no matter where it Is done. There are always promises of social betterment , improved access to services etc from Mongolia to the Bushmen of the Kalahari.

The Bedouin have quite a following & are rated on the International Sympathetic Meter higher than the Israelis .

Gonna be negative reaction but the Israelis knew that. I would be looking at the dynamics behind the move .

I also don’t think any such move would be possible in the US unless it came with a casino license.

How dare they give them better housing!?

Are these the same pro-Obama types who insist that replacing our “bad apple” insurance policies is good for us?

These protesters just hate Israel. Equating better housing with dispossession is so absurd they should be laughed out of the protest business.

Leftists and the useful idiot liberals they control hate America and freedom, and desire a suicidal form of fascism, headed by bizarre incompetents like Barack Obama or Hillary Wiener Clinton.

So what’s there about Israel for a leftist or their useful idiots not to hate?