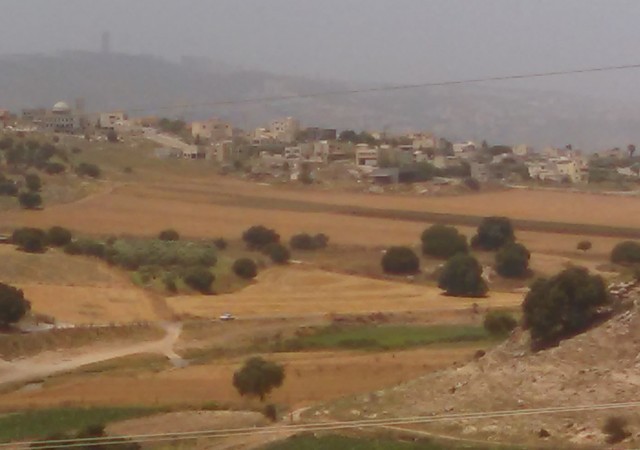 Continuing on my tour in northern Israel, on May 27, 2015, I visited the Bedouin village of Khawaled led by our guide Hassan Khawaled. 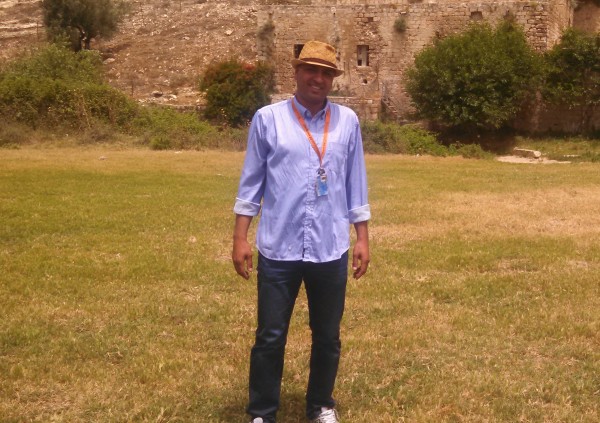 Most of the people in the village have the village name as a last name, or a variant, such as the first Israeli Bedouin diplomat Ishmael Khaldi, who is from the village.

Khawaled is east of Haifa, in the Galilee region. 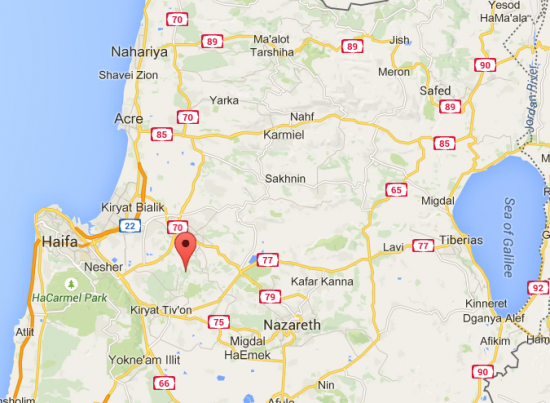 The Bedouin are Arab Muslims with a unique culture. Most Israeli Bedouins live in the south of the country in the Negev region, but there is a sizable presence in the Galilee.

The Israeli Bedouin are not obligated to serve in the Israeli Defense Forces, but many volunteer to do so. Bedouin have achieved great success in the IDF, and are particularly known as trackers at the borders.

Hassan explained to me how thankful he was to be a Bedouin in Israel, that it has opened up huge opportunities that would not be available to him elsewhere.

Many of the people in his village volunteer for the IDF, including career soldiers, or are in the police. Hassan himself served four years in the IDF, including in the Philadelphi corridor bordering Egypt in Gaza prior to Israel’s withdrawal.

Hassan explained that his mother’s house where he grew up, which really is more of a small shack and tent, was ordered demolished because it was not within the village planning limits. But his mother was being paid to move, and would be building a house next to Hassan’s own spacious and beautiful home.

Hassan invited us to a wonderful lunch at his house, which fortunately he served to us “American style” at a table instead of Bedouin style sitting on the floor. 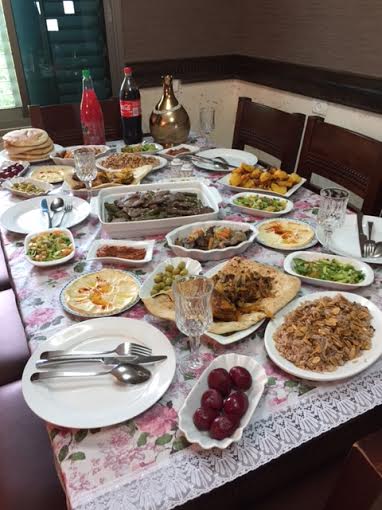 While we were eating the head of the local regional council, who lives on a kibbutz, stopped by. Hassan explained that the regional council has been very helpful to Khawaled in resolving planning issues, and that the village had excellent relations with nearby kibbutzim. 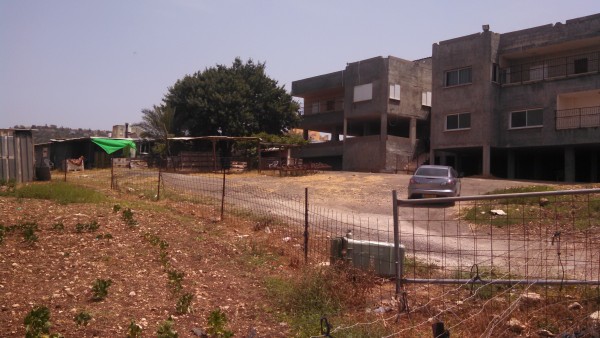 Khawaled has been highlighted by some groups as an example of discrimination against Arabs because of administrative orders to demolish houses not within the town planning zone. The ultra-left wing 972 Magazine wrote about Khawaled, Photo essay: Galilee Bedouin face house demolitions, featuring this photo: 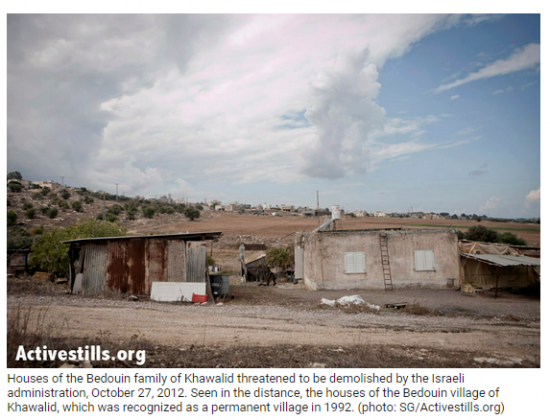 I asked Hassan about it, and it turns out that the house in question is his mother’s house, the one for which the government is paying her to move. Hassan writes:

Yes yes this is my family
It’s my uncle Ali and his family
This article was written at the beginning
Now all have changed
And we have an agreement
It was written to have some time and to try to get more by Ali family ….
The first photo is my mother house …
Today all is fixed ……

So the 972 Mag article does not tell the whole story, which ended well.  That seems to be common in profiles of minority communities in Israel — the bad is emphasized, not the good.

There is no doubt that underfunding of minority communities, particularly “unrecognized villages,” has been a problem.  But at least in Khawaled, that seems to be improving.  A road construction problem in Khawaled also is in the process of being solved, according to Hassan, with the help of the regional council.

Hassan took us to the local elementary school, attended by his daughter. The school serves Khawaled and the nearby Bdeouin town Ras Ali. The school was newly built and very modern.  Hassan explained that this reflects growing government funding for the community, something missing in the past.  In another northern Bedouin village, improved government response to planning problems led to a 76% Likud (Netanyahu) vote.

We met with the principal, a Bedouin man who had spearheaded the project to get the regional council to allocate the funds and who helped oversee the construction.

We were allowed to photograph one of the classes in session. The kids were all smiles and thrilled that Americans were visiting the class. 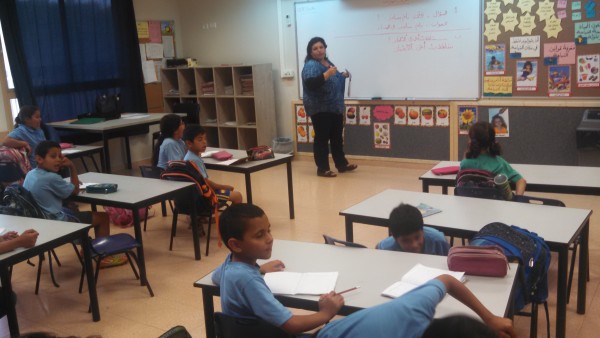 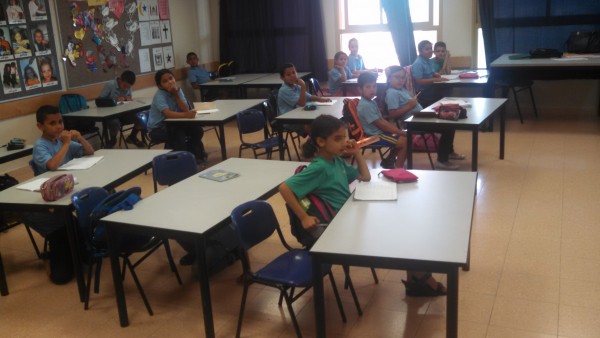 Hassan made sure to point out that the bulletin board at the back of the class featured all three major religions in Israel. The children also learned Hebrew in school. 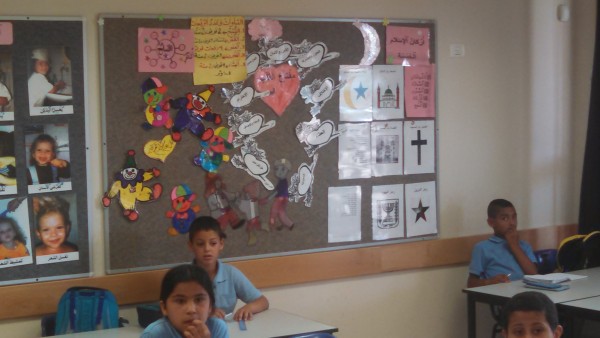 All in all, I got the sense that while there are problems in the northern Bedouin communities mostly relating to planning and construction issues, there also is tremendous pride in being Israeli and serving the country.

And there is no shortage of big houses being built. 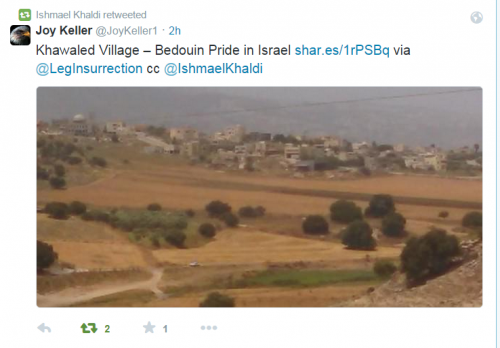 Prior posts from Israel Trip 2015:

“So the 972 Mag article does not tell the whole story, which ended well. That seems to be common in profiles of minority communities in Israel — the bad is emphasized, not the good.” The parallels between Israel and us are endless, including a press that lives on half-truths and omissions.

There’s more hope for the world in your three school photos than in the entire Democrat party here. The last one should be pasted on the windshield of every “Coexist” bumper sticker laden car in the US.

How much do you want to bet not a single one of those Bedouin children grows up to be a suicide bomber?

Both Arab and both Muslim. What’s the difference?

They will grow up to be very different adults.

Nature may mean a lot in some aspects … natural aptitudes, for example.

But nurture means a lot more in molding our characters and making us civilized human beings.

I always like reading your contributions. This one is right in line with my expectations.

Thanks for the kind words.

Israel relies on Israeli Arab Muslims, whose IDF service is not compulsory, to play a key role in defending Israel’s borders from outside Arab Muslim terrorists?

As the robot in the old TV series “Lost in BDS Hate,” would yell, his arms flailing about on the bleak landscape of some distant planet in some faraway galaxy,

Nor do the pictures above from the Bedouin school. They learn Hebrew and honor all three religions?!

Nice to see journalistic boots on the ground showing the real story compared to the mainstream media’s flyover bombing campaigns.

Good job, Professor. This should be picked up by major news outlets, but I’m afraid it’s too truthful and doesn’t fit the media’s and the “international community’s” narrative.

After decades of seeing Israel only through the mainstream media’s distorted lens, I feel I’ve finally been to Israel.

Why is it this amazing story of 260,000 people (that’s quite a significant chunk of Israel’s population) is not covered by “real” journalists?

Because a “real” journalist these days is only separated from a citizen journalist by a largely meaningless two-year degree, but a very meaningful lifelong leftist ideological mission.

Screw the two-year degree. I want to hear from someone who is smart and fair and wants to tell the truth no matter how pleasant or unpleasant it may be. Narrative and truth are not synonymous.

“While we were eating the head of the local regional council … ” — and what were the other dishes on the table?

Great reporting Professor! I’m learning things about my own country that I was only vaguely aware of.

Hey Prof., while you’re still in the Middle East please take a bit of time to watch this video of Egyptian TV.