Italy and Egypt may find key ally against ISIS… in Russia

Italy and Egypt may find key ally against ISIS… in Russia

This is a “Third World War by other means.” 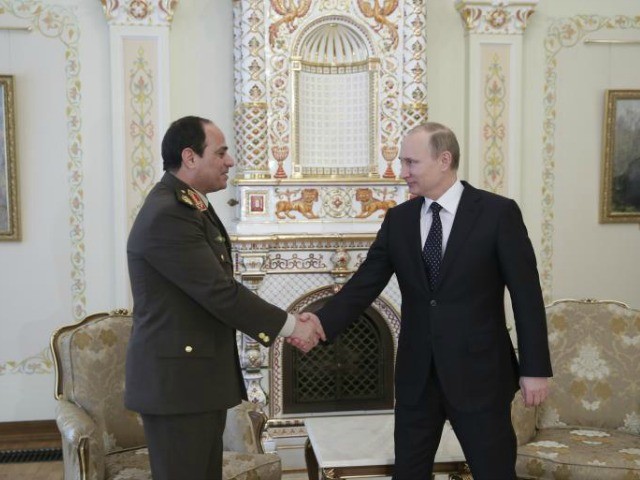 With the Obama Administration suggesting jobs as a solution to ISIS and its brutal ambitions, the Russian leader seems to be forging a key alliance with two countries that are extremely concerned about the terrorist take-over of Libya.

Various unconfirmed reports are emerging indicating that there may be joint international action planned in Libya as early as next week.

Egypt is already conducting air strikes against ISIS-linked targets in Derna, close to where Egyptian Coptics were massacred recently, as displayed in a gruesome video. Debka reports that Egypt’s president Abdel al-Fattah al-Sisi is planning further action in Libya, including more air strikes and possible ground troops, within a few days. According to the report, Egyptian commando and marine forces are preparing for sea landings to seize Derna and destroy the terrorist elements there. If this attack is actually launched, it will be the first time in modern times that an Arab country has sent ground forces into another Arab country.

Al-Jazeera television reports that the Italian navy is getting ready to carry off sophisticated military drills off the coast of Libya as early as Monday. Although Italy claims that it will be a regular exercise, there are many more vessels taking part in this year’s exercise than have in the past, which Italy explains by saying that they are testing out sophisticated new technologies.

…Some reports indicate that Russia has hinted at a willingness to participate in a naval blockade of Libya to prevent arm supplies from leaving Libya for other countries. Russia could play a role in this because it already has a naval fleet in the Mediterranean.

The fact that Egypt’s defense minister is now in Moscow lends credence to these reports.

According to the statement, the official visit is due to last “several days” and will involve “important” consultations “with top Russian military officials, with the purpose of increasing the aspects of military and security cooperation.”

The officials are also due to discuss the “transfer” and “exchange” of military expertise, the statement said.

This development could have reasonably been anticipated by anyone paying attention to the recent thawing of cool relations between Egypt and Russia and Italy’s concerns about its military readiness against attacks ISIS has threatened.

It is heartening to see world leaders understand they military leadership is required, not some well-spoken community organizer. Sadly, it doesn’t seem likely the threat of ISIS will be taken seriously by this administration…and we may not have time for a new President to take over before America truly faces an “existential threat“.

As King Abdullah of Jordan just notes, this may already be a Third World War:

I’ve said this to leaders both in the Islamic and Arab world and to the world in general: This is a third World War by other means. This brings Muslims, Christians, other religions together in this generational fight that all of us have to be in this together.

So it’s not a Western fight. This is a fight inside of Islam where everybody comes together against these outlaws, so to speak, together. And there’s a short-term part of this which is the military part of the issue. There is the medium part which is the security element of it. And then there’s a long-term element of this, which is obviously the ideological one.

I don’t think that explanation works.

Couldn’t he do more bad things without getting impeached?

Be patient: We have another 22 months for obama to do the other stuff on his lawless and unconstitutional agenda.

Russia has meh economy, lean and mean but declining population and a smart diplomatic team. Amazing what one can do with an old-fashioned concept of national interest.
Obamka, on the other hand — reflexively opposed to his country’s greatness and most of all bellow pay grade required. Who wants to deal with the country that elected and reflected him?

There’s already nothing leaving Libya for other countries – I think that’s quite been stopped. What there is, is smuggling weapons INTO Libya- and if by “other countries,” they mean Italy, and not Syria or the Gaza Strip, this idea would be disinformation. This is not going to be tried

Small weapons, like what got into the hands of terrorists in Paris and Copenhagen, didn’t come that way,(from Libta) but were obtained from Chechens, probably under Russian control.

And the U.S. Sixth Fleet is there in the Mediterranean, and while the U.S. government may not be helping anything now in Libya, being busy still trying to get a “political settlement”(I don’t understand that at all – and what does that have to do with fighting violent extremists?) it is certainly opposed to arms smuggling, especially into Europe.

By “security cooperation” I think they mean also the secret police. This is an area in which the U.S. cannot, and will not, compete.

Of course, The ex-KGB member may engage in extensive lying to their clients, like it happened with Nasser.

Is it supposed to be sarcastic? The news item makes it clear that we are talking about building an Eurasian alliance, not some sort of internal police exchange of expertise… Which, you know,Turkey has a far more repressive state than contemporary Russia.

Obama’s reckless conduct in Libya has created an incubator for ISIS and other jihadi’s. Obama of course denies his responsibilities for Libya much like he denies responsibility for Amb. Chris Stevens murder. Obama refuses to call ISIS for what it is and claims itself to be, an Islamic renewal Jihadi force.

If Egypt, a country Obama shuns, much like Israel, aligns with Russia can Israel be far behind or Saudi Arabia? My guess is given the stupidity and delusional nature of Obama and his national security team, the day isn’t far off when locals start demanding the US withdraw its forces from the region with the associated debacle for the US of losing its influence with the power players in the region. I expect all of this to happen long before Iran gets the bomb.