The Italians have mastered the art of Tweetfare 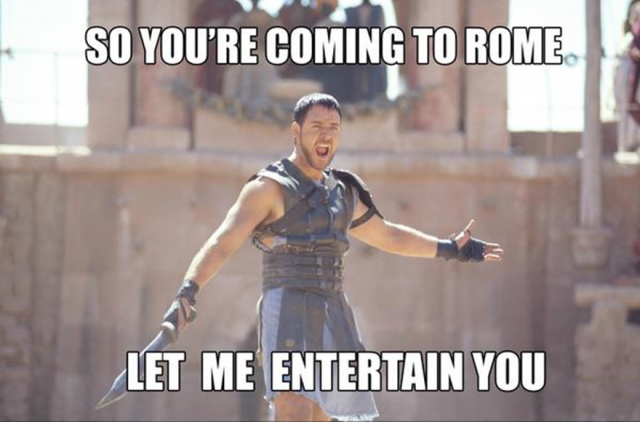 The Italians counter-attacked with a great deal of humor.

For the government in Italy, the prospect of IS-inspired attacks was cause for real concern. Indeed, the Italian foreign minister said last week that Rome would weigh participating in any military intervention to keep Islamic State forces from advancing in Libya.

But while some in Italy fear the risk that terrorists, mingled among boatloads of migrants, could reach Italy from Libya, others have greeted the prospect with humor.

They exploited the #We_Are_Coming_O_Rome Twitter hashtag to offer mock travel advice to IS operatives, including warnings about Rome’s terrible traffic congestion and restaurant recommendations.

They promised to show ISIS famous landmarks, including the Leaning Tower of Pizza:

OK ISIS. This was it. We had enough. Don’t touch our beloved Tower of Pizza! #We_Are_Coming_O_Rome pic.twitter.com/CZ0QXaQ3gN

#We_Are_Coming_O_Rome What a great choice! Lovely weather, beautiful culture and fantastic women. All you don't have. pic.twitter.com/QJVGHxZcCj

Perhaps our own administration can learn from the Italian’s example! The most effective social media campaigns are those that arise spontaneously; they cannot be staged efforts full of talking points.

If Italy’s military tactics are as impressive as the wit of its people, then ISIS is facing a formidable force, indeed.

Hmm, I’m afraid the Romans miss the mark a bit. Humorous, yes, and mocking the barbarian savages is fine with me. the more the better. OTOH, the Italian military depends upon the same military capability the rest of the eurowussies do, and it is currently under the control of obambi.

The Italians are wily. They are masters of the chaotic response. They drove the Germans nuts during WWII, and protected their Jews through sheer inefficiency. The Daesh will be surprised.

I believe that the hilarity ensued after the rocket scientists in ISIS threatened to throw homosexuals from the “Tower of Pizza.” I must say, the idea of a Tower of Pizza only increased my desire to vacation in Italy.

Oops. I read this post on a mobile device and much of it was apparently missing. Including the “Tower of Pizza” tweet. Don’t I feel stupid. Next thing you know, I’ll be joining the “Jeb for Prez” team.

When I vacationed in Europe, I visited Pisa. In a small linen shop in town, I noticed a stack of folded bedsheets. I photographed it. It is my favorite vacation photo: “The linen tower of Pisa.”

Of course the defense of Rome will be thanks to US Nato forces…but the tweets are funny.

Well, it will make the battlefield photos interesting.

Instructor Zero will be waiting for them.