Executive overreach? Not so fast. 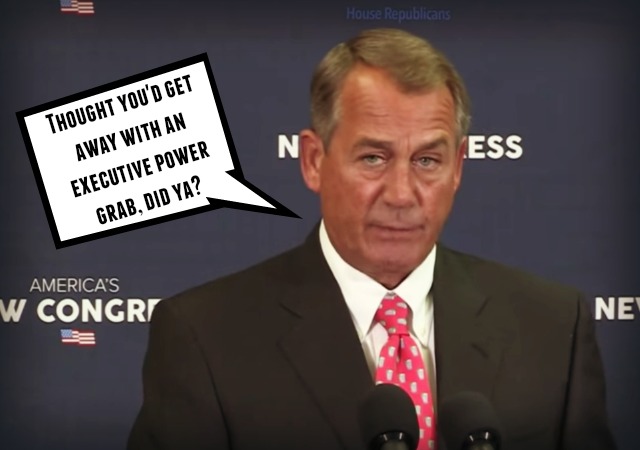 This morning, Speaker Boehner announced he’s working with House members to finalize a plan authorizing legal action against the President for his immigration executive overreach.

This latest effort is in addition to the work the House has already done to rein in immigration.

The House tried to limit the president’s executive overreach with the Department of Homeland Security appropriations bill. The bill diverted funds to beef up immigration enforcement.

According to sources on the Hill, Boehner’s latest effort is working to directly address immigration overreach. The resolution could allow the House to join the states’ suit against Presidential executive overreach, although final course of action has yet to be decided.

“We are finalizing a plan to authorize litigation on this issue — one we believe gives us the best chance of success,” Boehner said in the meeting.

I believes it when I sees it.

Oh, I’ll bet he’ll file a lawsuit, he has to be seen doing “something”. And I’ll bet the courts will largely or entirely refuse to intervene in this separation of powers mess, the Congress after all has its remedies for these problems, it’s not the courts’ problem they’re too … genteel, perhaps to use them for real.

Genteel? Is that synonymous with wimpy?

I’d say yes, except the courts aren’t wimpy so much as lefty.

Remember when Mugabe took over Zimbabwe? Once he had the justice system under control his fight was over. Obama is following Mugabe’s track. I wonder if he’ll try to pen and phone his way into a third term.

Yet as Boehner pointed out this morning, much of the latest executive sidestep falls outside of the jurisdiction of the House Homeland Security Committee.

Of course, the time to have done something about that was when Boehner could have sent to the Senate and Obama a short term continuing resolution for all of the government, not just the DHS. But it was somehow imperative to give up almost all of the Congressional power of the purse till October of this year when the next Federal fiscal year starts.

Boehner seems to think the base are idiots (he certainly shows enough disdain to conclude that) and that we won’t notice how little time it took the Congressional Republican establishment to discard their 2014 campaign promises. I suspect he’s wrong, perhaps even in the short term.

“Finalizing a plan to authorize litigation”. There is a phrase that just oozes urgency and resolve. Figure 6 months for the plan. 6 months for the details of authorization. Then, of course, we will be in the presidential campaign season and they cannot do anything controversial, so it will have to be postponed until after the election.

Been there, seen that, have all the t-shirts.

maybe if Boner had refused to give Obola all the money he wanted with the continuing resolution, and instead had passed a series of budget bills, cutting all funding to enforce the overreach…

naw, what am i thinking? that would be both how the system is supposed to w*rk, not to mention requiring both balls AND brains, of which Orange-boy has none.

this is just more kabuki theater, and isn’t going to do anything useful.

Well, there are some uses.

I’ve read that the “Secure Our Borders” bill is actually little more than “put up a couple fence posts and a camera and then go home.”

Boehner’s Obamacare lawsuit was filed two months ago and hasn’t been heard from since. I don’t expect any more from this move.

Not quite. Should be what an orange.

….with a hanky tucked in the bodice.

Look to the individual state lawsuits. This GOP will do nothing. They’ve already backed out of campaign promises about abortion, Obamacare, Keystone, etc. Remember that 12 item list they promised to jump on first thing after new congress was sworn in?

What an incredible loser this a-hole is. He is rivaled only by the voters who tolerate him as GOP Squeaker.

If his overreach and power grab are so egregious, why is impeachment off the table? Is it because we have become so dumbed down that we deem such behavior as acceptable?

1. Embrace –tell the base you care about the issue. (done)
2. Extend — drag it out, modify it so it does exact opposite of what you said in the “Embrace” stage.
3. Execute — put a knife in your supporter’s back citing (insert any old excuse here)