Remember how Senate Dems rushed through Obamacare on Christmas Eve 2009?

Remember how Senate Dems rushed through Obamacare on Christmas Eve 2009?

The way CRomnibus was pushed through brings back bad memories, and this time Republicans were part of the problem. 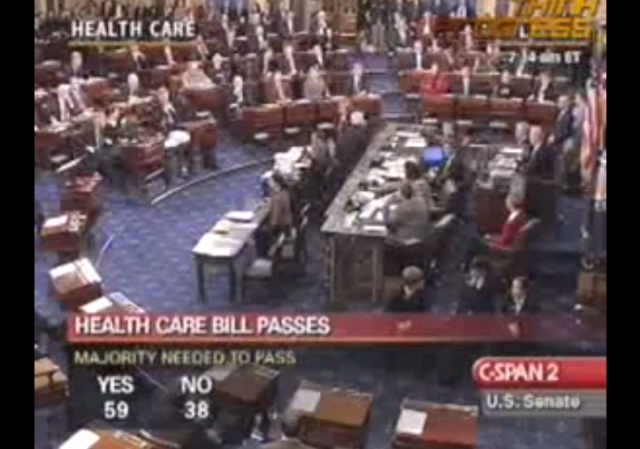 Watching the maneuvering to rush through CRomnibus 2014, a massive bill few have read, reminds me of how Senate Democrats pushed through Obamacare legislation on December 24, 2009.

That Senate bill became the foundation of the Obamcare eventually enacted, because Senate Dems lost their filibuster proof majority when Scott Brown was elected in January 2010. The House Dems were forced to swallow the Senate bill, with only minor “reconciliation” changes.

I wrote just before passage, Dems Break It, They Own It:

Equally important was the fact that the Democratic bills, regardless of which version one picks, were monumental disasters waiting to happen, as I have written about almost 200 times in the past several months. I have analyzed, among other things, the unprecedented and possibly unconstitutional individual mandate, the use of the IRS as health care enforcer, the expansion of government bureaucracies, the increase in job-killing taxes, and a host of other fundamental flaws in Democratic proposals.

For Republicans to sign onto this manmade disaster would be to betray our traditions, our constitutional form of government, and individual liberties.

Republicans were right to say “thanks, but no thanks” to being a party to the worst piece of legislation “since the Great Depression.”

Don’t try to pawn this catastrophe off on us by rewriting history to claim that the bill is so horrible only because Republicans refused to play ball. That is pure fiction. The bill would have been worse.

Democrats are about to break the best health care system in the world. The store policy is: “You break it, you own it.”

Why are we repeating history, this time from the wrong side?

Only 18 Senate Republicans voted against the Crapulous bill http://t.co/QqNUoRfEuJ

I voted “No” in head and in my heart and with my vote this past election. I will continue to vote “No” in the next election and all subsequent elections. I have become the person of “No!, enough is enough.”

The stench of Washington reaches into Illinois – Rep Peter Roskam voted FOR the bill.

American history for the past 100 years has proven that the word everybody in Washington loves – compromise – is code for enlarging the state. There’s been a one way ratchet, uninterrupted since the advent of the administrative bureaucratic welfare state, toward expanding state power at the expense of individual liberty. The special interests are so entrenched there is no way to stop it. It is a runaway train.

We have a far left party and a center left party. The hard part is deciding which is which. As Bruce Bartlett has pointed out, at least the Democrats TRY to raise taxes to partially pay for their social engineering adventures when they get power. Republicans in the GWB years expanded government and cut taxes.

The rush to pass coupled with the size of the bills is disgusting: Together they constitute a clear signal that the “leadership” does not want the public to know what is about to happen.

compare their behavior with the GOP’s 2010 Pledge To America.

We really need to form a second party in this country. This one is destroying us.

Well, what else do you expect Republicans to do? If they fight against their political opponents it might offend someone – and someone votes! They cannot risk the someone vote, can they?

I’d love to see a collection of the campaign promises some of these GOP yes voters made during the 2014 midterm primaries and general. I suspect they might conflict with their approval and support of CRomnibus.

The way CRomnibus was pushed through brings back bad memories, and this time Republicans were part of the problem.

A quote from a commenter elsewhere:

We live in a one-Party state; with neither an opposition party nor any representation of the interests of the people. Both wings of that party are enemies of the country and Constitution.

Which is a strong indicator of where we are headed.

The agreement was to bring up the Cromnibus on Monday, but Cruz and Lee forced the Senate to stay in session.

Not only did this NOT stop the bill, it gave Reid the chance to rush through a few more nominees who would have not been confirmed without the weekend session, and who would have been rejected by the new Senate.

When you act rashly with no plan and without consulting colleagues, you not only fail but also invite the unintended consequences.

Cruz admitted he had no plan after the shutdown last year and obviously hasn’t come up with one since, either. Yet some people talk about him as if he were a serious candidate for President despite his lack of accomplishments and resume thinner than Obama’s in 2008.

They don’t call us The Stupid Party for nothing, eh?

You are such a boring, predictable idiot.