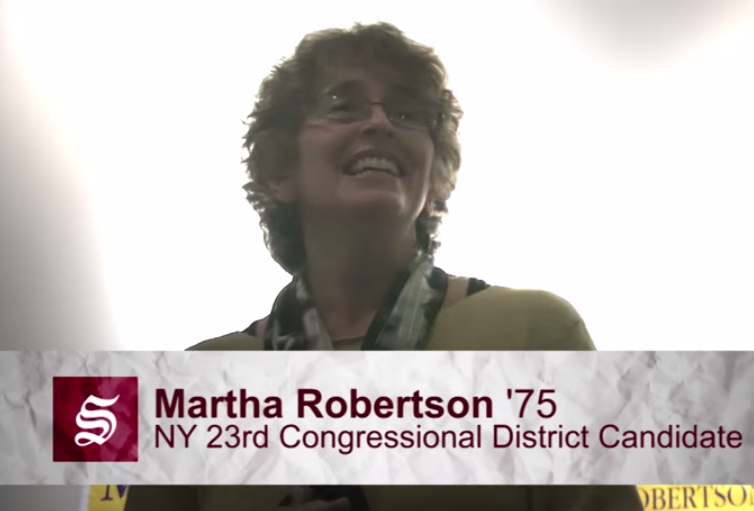 Remember my post a week ago about Martha Robertson’s visit to Cornell and the accompanying media lockdown enforced by the Cornell Democrats?

Video and audio recording were not permitted, according to an announcement just before Robertson started her speech.

I attended but did not record because of those rules and how watchful Cornell Democrats were to ensure compliance.

A videographer for Cornell’s main student newspaper, the Daily Sun, managed to take video, a nearly two-minute long clip of which was published on the Daily Sun’s website two days later.

But the Daily Sun’s video was not just by chance.

After learning of the existence of the video, I immediately contacted the Sun videographer, asking if she obtained prior permission. She said she did from both the Cornell Democrats club and the Martha Robertson Campaign.

She went on to tell me that she worked for the Robertson campaign as an intern.

Then it all clicked.

Those video and audio recording rules were a ruse meant to avoid embarrassing video clips, like the one Professor Jacobson videotaped at a Robertson appearance at Cornell last spring.  If only a campaign intern could record, then any embarrassing clips would never see the light of day.

Both the videographer and the Cornell Democrats president are in this image of interns tweeted by Robertson earlier this month: 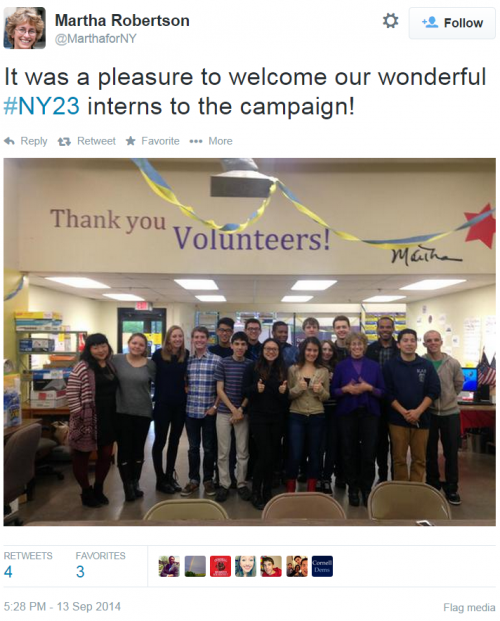 Martha Robertson, who is notoriously aloof from the media, seems only open to media represented by her own insider, while keeping independent and conservative media away.

You can read my original post, including about my attempts to get answers, at The Cornell Review’s Review Blog.

Deft use of Martha’s own twitter to expose her shenanigans. I find her to be the worst type of politician, regardless of ideology.

Zachary, you have to hand it Professor Jacobson for finding that gem.

Anytime Martha cannot control the outcome, your going to find Martha changing the rules. If she can’t come through the front door, she has no problem using the back.

Today there was a press release stating Martha will not be participating in two of three October debates previously scheduled and agreed to with sponsoring local news outlets in Jamestown, Elmira and Olean. Today her campaign spokesperson walked back two of them with this caveat, “Voters of Western New York deserve to see a televised debate. Therefore, we cannot accept any debate schedule that does not include a televised broadcast debate in Western New York.”

Only one sponsor is a TV station located in Elmira, WETM-TV (10/23/14). Perhaps she is having second thoughts on the out comes if she is expected to defend her qualifications, her voting record, and her belief that her highest priorities in Washington will be global warming, or is that climate change, One Payer National Health Insurance and higher taxes in the 23rd where the statistics she reads about occur; Loss of residents and revenue, loss of industry, high taxes and higher unemployment. It appears Martha is up for running for Congress, if only for the ego trip and the soap box that comes with it, but not willing to stand up publically in a venue of “mixed” potential voters. Once you listen to Martha expand on herself, you get to see Martha is smarter by half than those she is surely going to meet out side of her pond. She really, really, should get that air time so she can do herself proud. Prof. Jacobson can attest to her public performance when countered. They all would be two bag popcorn events.

Another voice has it exactly right. The flaws in this case are inherent in Robertson’s character (or the lack of it). Making things up, avoiding challenges, twisting facts, making claims like the hacking one, hiding her record as an Ithaca liberal rather than being proud of it, the media lockdown except for her friends at Cornell, these are all character issues. On the issues, Robertson is usually wrong but worse than that are the myths, the fantasies, and the untruths. She wants debates, sure she needs desperately to get some visibility, but demands it be on her own terms and that she not be truly challenged. She should have stayed in the safe Ithaca area, she is definitely way out of her league outside the square miles of unreality that is Ithaca.

If I were as mind-numbingly idiotic as she is, I wouldn’t allow any recording, either!

The democrat party is a fascist party. That is the hard reality. Face it.