One of the weirdest, most unresponsive campaigns I’ve ever seen. 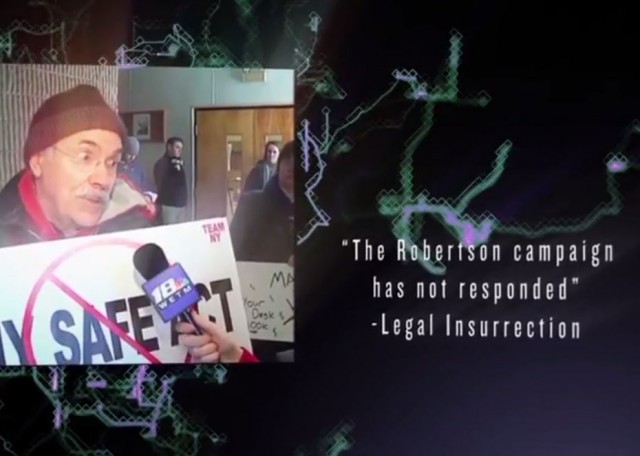 I’ve covered many campaigns over the past several years here at Legal Insurrection.

The campaign of Martha Robertson, challenging incumbent Republican Tom Reed, is one of the most bizarre so far.

They are completely non-responsive. Even when I write to them or call seeking a statement so I can present their side of a story, there’s silence. Even before I exposed problems with the campaign’s communications and positions, they were non-responsive.

Robertson also is hard to find on the campaign trail. If not for her stop at Cornell, I don’t think I ever would have been able to get any response from her or her campaign on the issue of the campaign’s false claim that GOP operatives hacked her website during a key fundraising period. Even then, her response was non-responsive.

Maybe it’s me? Maybe I’ve offended them by asking questions and trying to find out the campaign’s position on important issues, like her support for Obamacare as a stepping stone to single payer and her complete misunderstanding of the Veterans Administration scandal.

No, it’s not just me, as this campaign ad just released by Congressman Tom Reed demonstrates:

“Martha Robertson continues to rely on personal attacks because even she knows she’s wrong on the issues,” said Katherine Pudwill. “Tom has conducted nearly 150 town halls in a district the size of New Jersey and continues to fight for jobs and the future in the Southern Tier and Finger Lakes.”

When I covered Reed’s town hall last summer, he ran overtime taking questions from some hostile members of the crowd.  He was very comfortable in his skin and his policy positions, even when it meant telling a questioner that he disagreed.

Robertson just isn’t that way, she’s not a natural campaigner except when preaching to the choir.

Robertson seems to think she can hide, and the flood of national Democratic money and Nancy Pelosi appearances will be enough.

Have a staffer call her, say you’re from the Liberal Progressive Democratic Society Newsletter.

Pretend that you are a White House National Security Council spokesdude and that you have some talking points for her. Maybe she will open her door to you.

Not to arouse the hackles of the feminists, but frankly if you consider the average intelligence of Democratic women elected to Congress, it’s somewhere between a border collie and a senile chimpanzee.

So Robertson must see herself as fitting right in. And she is following the Obama playbook of ignoring press inquiries unless they need something. I see the media noting she doesn’t get back to them, but I don’t see them coming down too hard on her. After all, she’s a Democrat.

But Reed must be in pretty good shape, else some other Democrat would have jumped in the race. Martha seems the type of candidate whose support falls as the voters get to know her.

Robertson has long been comfortable only when she can be with supporters or is in deep blue territory. She has little concern for facts (hacking and VA claims) and less for people who disagree with her. Estragon is right, as her name recognition goes up, her negatives go up faster. So, she’d be better off staying home than campaigning! Still, the mainstream media has to have a “competitive” race or there is no story. By contrast, Tom Reed is very natural with people of all views and has worked really hard to listen to people.