At public forum, NY-23 candidate refuses to answer if aware at time of fundraising email that GOP operatives “caught” hacking her website 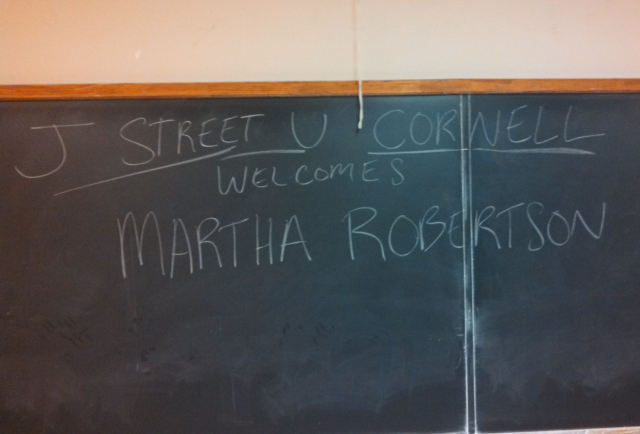 Martha Robertson, the Emily’s List-backed and “Red to Blue” designated Democratic challenger in my home district of NY-23, also has been endorsed by J Street.

J Street is the controversial group which received funding from George Soros and a mysterious donor from Hong Kong.

Robertson appeared tonight at a public forum, open to the entire Cornell community, hosted by J Street U Cornell, a student affiliate of J Street.

Robertson spoke about many political issues involved in the campaign. She barely touched on the Middle East, although she did say she has strong ties and positive feelings toward Israel and supports a two-state solution.

For several months I have been unable to get answers from Robertson’s campaign regarding her fundraising email in which she solicited donations based on the claim that GOP operatives were “caught” trying to take down her website during a key fundraising period. The Robertson campaign has not responded to my emails or calls for months.

But based upon what the Robertson campaign has told other media outlets, it’s clear that she has no proof whatsoever that GOP operatives tried to take down her website, much less were “caught” doing so. For whatever her reason, Robertson simply will not admit that the fundraising pitch was inaccurate and without basis.

Instead, the Robertson campaign has constructed an explanation that there were at least nine SQL injection attacks. Such attacks, however, are completely common, would be unlikely to result in taking down her website, and there is no proof that GOP operatives were behind them. The Robertson campaign has not responded to our request for server logs to confirm that there even were these SQL injection attacks.

The Robertson campaign and Robertson herself never have answered the questions of whether Robertson authorized the email at the time, and if so, why she did so without proof.

Since the Robertson campaign has gone silent on me, I used Robertson’s appearance at this public forum to ask her those questions. Not that it matters, because this was a public forum open to the entire Cornell community, but I waited until several students had asked their questions and no other hands were raised out of deference to students who wanted to ask questions.

After I asked my questions, Robertson repeated the “SQL injection” non-explanation, then launched into a filibuster on a different issue, the GOP creation of fake candidate websites.

When I tried to follow up, both Robertson, her campaign manager Jordanna Zeigler, and J Street students shut my questioning down.

I then was told by a J Street representative that Robertson’s campaign manager would be willing to speak with me in the hallway.

There was no way, given the Robertson campaign’s apparently false accusations in the fundraising email, that I was going to talk to the campaign manager in the hallway unless it was recorded. But when I asked for a recorded statement, she refused (see end of video) and walked away.

This is a dumb campaign strategy.

All we seek is direct and relevant answers. It’s an important issue in the district, as demonstrated by the strong local television media interest in the story.

Here is the exchange, in full:

When you’re lying like a well-worn rug, you do what Big Teeth Robertson did: you dodge.

Any politician who says they want a two state solution in re Israel and the Muslims in Gaza, Judea and Samaria must be both uninformed and crazy.Everybody knows a one state solution: Israel, and the Arabs returning to their original nations (Yemen, Saudia Arabia, Egypt, Morocco, etc.) is the best solution for peace.

I would stay as far away from her as possible, much less vote for her.

Thank you for moving to contact, heading to the sound of the guns. You shed lustre on your profession. A true, brave warrior! Thank you! Thank you!

This is a classic case of painting oneself into a corner with a lie, and then being exposed.

Thank you, Professor, for asking those questions in a forum where people are not normally confronted by someone seeking relevant answers.

Yes Paul .She is exposed . But ! And this upsets me to no end.She hides behind the students that should expose her even more.If i heard that for the first time and especially from a noted Professor of Law it would throw a red flag the size of Texans in front of my eyes . I don’t understand these students not wanting to find and hear the truth !!

Do you teach journalism as well? It seems as though you could give the MSM a few lessons.

Too funny: Watch. Her. Squirm. Nothing to see here, move on. Keep at it!!!

One of the most infuriating aspects of modern politics for conservatives is to hear the blatant lies of the left and wonder “How can they get away with that?”

Of course we know the leftist media will comply with their candidates’ interests and obfuscate or ignore issues as needed. But those who regularly support the left/Democrats, or at least give them serious consideration, have to be willfully ignorant themselves.

They just don’t care if they are lied to. If you paint them into a corner where they must acknowledge leftist lies, they counter with “all politicians lie,” as if their declaration of moral equivalency settles the matter.

We have to realize there is a significant segment of the population, probably at least 30% and possibly more, that simply accepts lying as a tactic and will never hold Democrats responsible for their lies – as long as their policy needs and public gravy train continue to flow.

It is this contingent which forms the backbone of permanent support for Democrats like Robertson, Obama, Schumer, Pelosi, Reid, and Hillary Clinton. They are utterly corrupt and unapologetic.

Oh dear, is she in her right mind?

A few SQL injections are all they’ve got!? Wow, my own tiny, personal web server at home and my MX host at linode (used to avoid mail blocks on roadrunner IP blocks) get hit with more than that nearly every day. To say nothing of the continual brute force attempts to get in via ssh or relay email (I require authentication, it’s how I and my family send private email from phones or tablets). I run fail2ban to catch these and drop packet filter rules on to block offenders for a time to cut down on the traffic and the data it logs shows the vast majority comes from china… shocker I know.