We covered the incident the other night where the anti-Israel Student Senate President Megan Marzec at Ohio University had campus police arrest four pro-Israel students who were protesting the “blood bucket challenge” performed by the Marzec.

Marzec came under heavy criticism, including from the Student Senate itself, for her hijacking of the charity fundraising effort for research into an incurable disease, in order to attack Israel.

Is there anything the anti-Israel crowd will not make a political battleground?

One of the students, Rebecca Sebo, was arrested while reading a Legal Insurrection blog post that collected university president statements against the academic boycott of Israel. 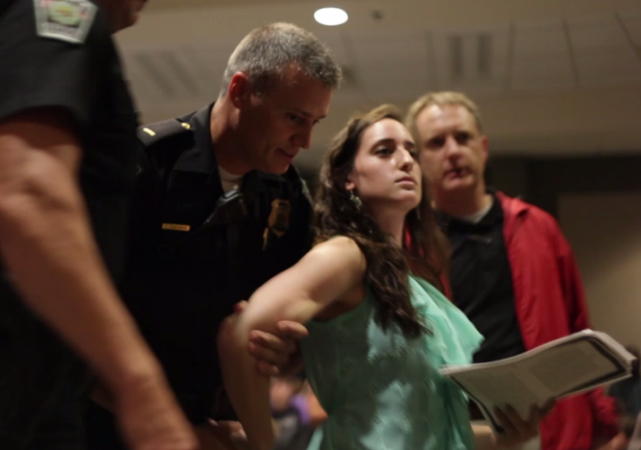 As of now, misdemeanor charges of disrupting a public meeting remain pending and have not been dropped:

Their pre-trial dates were all set for Sept. 24 at 8 a.m. The students, and Rabbi Danielle Leshaw, declined to comment.

Judge William Grim originally scheduled the pre-trial dates for Jonah Yulish, 19, and Maxwell Peltz, 20, on Sept. 25, which is the Jewish holiday of Rosh Hashanah. Becky Sebo, 20, and Gabriel Sirkin, 20, asked for their pre-trial dates to be set on Sept. 24 and the others changed, as well.

Each of the four students were charged with a fourth-degree misdemeanor count of disturbing a lawful meeting. That carries a maximum sentence of 30 days in jail and a $250 fine.

To turn this into a criminal matter is pretty outrageous. Even if you believe the students were disruptive, they were not violent. There have been numerous disruptions by anti-Israel students at events, but I’ve yet to hear of an arrest unless there was an act of violence (as happened at Temple Univ. recently.) In those cases, the protesters are merely led out of the room.

Hillel, the international organization that supports Jewish and pro-Israel students on campuses, has fired off a letter to the President of Ohio University pointing out the absurdity of vesting the ability to order an arrest in the power of a student who herself was the subject of protest. The letter reads in part: 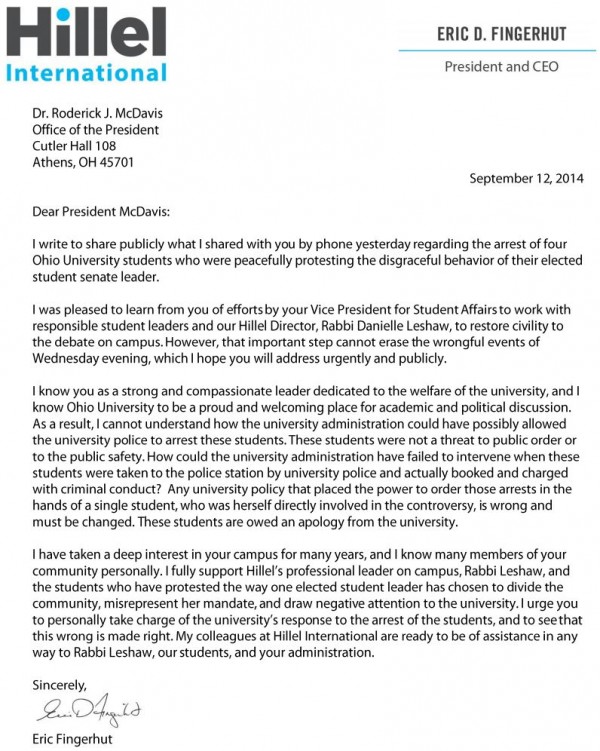 An apology is not enough.
An apology should be only the initial step before dropping all the charges. Then IMHO, the antisemitic biatch should be expelled for such abuse. It wouldn’t hurt to also fire the arresting officer(s).

It’s just my opinion, though.

Just for a start.

And return all funds received from Arabic countries.

Yes, I believe Megan Marzec should be expelled, and then sued for all she (her father?) is worth. However, it appears the campus police were just doing their job and should be held blameless. But, if Bloody Megan really did have that level of authority someone in the school’s chain of command needs to be talked to rather sternly, and then that policy should be changed! We obviously can’t trust any future Megan’s with this much authority; she has proven that the average student – or below average, as the case be – is not responsible enough to wield that level of power.

The campus police were NOT doing their job. Nowhere in the job description of any police officer in the United States are the words, “Suppress free speech.” Conservatives on campus have routinely been shoted down and prevented from speaking by liberal goons, and officers have done nothing buy standby and watch. It has been well established precedent at colleges and universities throughout the nation that free speech includes the disruption of meetings and speakers.

“Keep order” is their basic job description, never mind all the fancy stuff and big words. They are supposed to let the courts decide right, wrong, legality, etc. it they cannot get people to just settle down.

Actually I highly doubt that the campus police actually had to do anything the psycho anti-Semite said. She had them called and then they chose to remove these students and charge them. They could have just as easily looked at the bigot and told her to go pound sand.

From what I understand these kids were doing is basically one would read for their allotted time and then the next kid would pick up the reading and so on and so on, which has been a tactic of the left for years. I haven’t heard anyone say that they were refusing to relinquish the floor. I may be wrong but as long as they were following the procedure for speaking before the student body in question, well then the bigot can just lump it.

At the very least she should be force to vacate her seat on the student senate or whatever it is called and never allowed to hold a position again.

She wasn’t to say her pathetic display is free speech, but not grant that same right to others, typical socialist progressive.

I like this. Punch back twice as hard, as the other law professor sez…

I would say “Sue them back into the Stone Age” but it is obvious that those anti-Semites are already living in the Stone Age.

Still they need to be hit with numerous. multimillion-dollar lawsuits for their violation of their student’s free speech.

I think the campus police probably should be hit with lawsuits as well as perhaps the state and university because no “student” – no matter what office they hold – really has the college’s authority to do that…. I don’t think they do!

I love the look on her face in the second picture. No way is she intimidated, or even slightly cowed. She looks red white and blue American.

That is the spirit of America we need to fight for. You go, girl.

Rebecca Sebo lived in Israel for a year and has friends in one of the cities that was being bombed. She has a personal stake in this and it is obvious she has a passion for this cause. Campuses need strong leaders like this.

Since when do campus police take orders from students?

Your question is probably meant to be rhetorical, but it’s a very good question. Were these students ordered arrested by Marzec as the president of the student senate (and does the position give her the authority to order arrests by campus police), or did she make a complaint as a citizen?

Exactly. As a beat cop there were a few times when people would “order” me to arrest someone. I simply told them only one person made that decision and they were looking at him.

IF things started getting out of hand and I HAD to do something, I would simply lead the person out of the room.

NO civilian has the authority to order an arrest.

Imagine the small talk in holding:

Had to check when I saw Fingerhut’s name, sure enough former Legislator both State and Congress from the Cleveland area. He was head of the Board of Regents during the last administration so he knows Ohio U. My guess the OU president doesn’t really want to tangle too much with Fingerhut, he could bring in a serious amount of bad press for the school (other than what they are doing to themselves).

Sue them. It’s the American way, at least as long as Democrats are viable.

Work in the legislature to remove immunity from all public officials who violate the civil rights of others. Let them defend their own actions with their own dollars and put their own assets at risk, not the public’s.

Doing that will be the fastest behavior modification program ever.

In cases like this an apology is for wimp; a lawsuit is the breakfast of champions.

Well done, and please continue! The liberal, anti-Israel propaganda that passes for education in our universities must be confronted by brave souls such as these students.

The Cleveland Plain Dealer (NEOMG) has picked up the story now, since some of the students arrested were from the Cleveland suburbs, which are heavy Jewish communities and also the political base of one time legislator Eric Fingerhut.