How about not academically boycotting people or institutions just because you disagree with their views or governments? 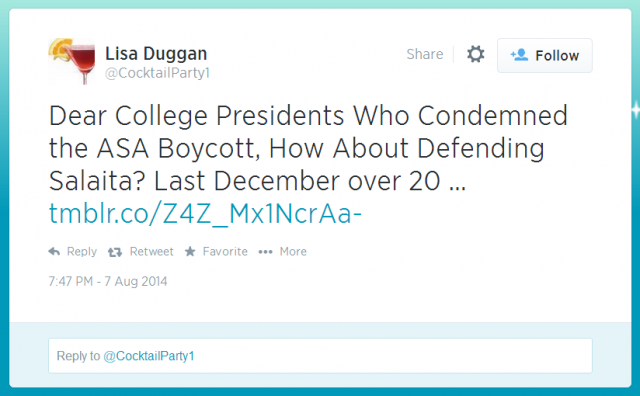 For background on the controversy surrounding Steven Salaita, who was denied a job offer at U. Illinois at Urbana-Champaign allegedly due to his tweets, see my prior posts:

No one knows for a fact why his job offer was denied at U. Illinois, but the presumption is that it concerned his bizarre, vulgar and unhinged tweets. His defenders try to portray this as viewpoint discrimination, as if he lost out just because he criticized Israel; at this point that is entirely speculative as to the basis for the university’s actions.

The whole thing may come down to contract law.

Jonathan Marks points out at Commentary that they are The Uncritical and Intemperate Partisans of the Boycott-Israel Movement.

As noted in an Update to my prior post, NYU Prof. Lisa Duggan, current President of the American Studies Association and a very aggressive supporter of the academic boycott, has tweeted out for University Presidents who opposed the anti-Israel academic boycott to come to Salaita’s assistance on grounds of academic freedom (see Featured Image). That article was written by another anti-Israel boycotter, David Palumbo-Liu of Stanford.

There’s something beyond hypocrisy about this.

Duggan, one of the most vigorous enforcers of anti-Israel academic boycott who even organizes conferences devoted to pushing the boycott agenda, now seeks the help of those who reject her boycott actions on grounds of academic freedom?

I’ve tried to think of a better description than hypocrisy.

The best I could come up with is “Do unto others as you would have done unto you,” or one of its variants.

Obviously not in the anti-Israel academic boycott playbook.

Update: Interesting take by a grad student at HuffPo, Anti-Israel Professor Shouldn’t Have Gotten a Job:

Let’s relish in the irony for a moment: the same folks who advocate for the boycott, divestment and sanction (BDS) of Israeli academics now claim that anyone should be able to express academic viewpoints without repercussions. Try telling that to Hebrew University professors in Jerusalem that the BDS-crowd wants to ban from American schools.

I realized pretty early on that actions have consequences. Maybe they’ll learn sometime.

I’ve tried to think of a better description than hypocrisy.

Once the idea gains traction – that “academics” have no special protection and can be cashiered just because they’re offensive jerks – the careers of all of these characters are at risk.

was something odd about the HP embed code. didn’t want to work at all for me.
I grabbed src mp4 and uploaded it if you want to post embed from that.
http://www.conservative-media.com/video/9RB41UWR5AU1/Steven-Salaita

note cron runs every hour to index for streaming so for a bit it may be sluggish.
uses pseduostreaming so theres a tradeoff between ease of use and real streaming.

I call this the Helen Thomas Paradox.

It all comes down to this…

Freedom of speech is not a license to say any damn thing.

“It’ should be in our playbook.

You are right to use the words of Jesus, the Lord of the Sabbath from his Sabbath discourse, recalling the Tanakh and The Book of Deuteronomy:

“Do to others as you would have them do to you.”

This teaching IS one-on-one social justice.

This teaching means a neighbor tells the truth in love to his neighbor, he forgives his neighbor and does not spew hatred (via false witness, envy, etc.) to inflame more hatred.

Be merciful, just as your Father is merciful.”

This is summum bonum.

Salaita is to professors what Hillary Clinton is to Secretaries of States.

Can’t insult the guy any more than that.

The folks running the UN are the latter.