Closed NYU anti-Israel conference goes off without a hitch, or a dissenting voice

Closed NYU anti-Israel conference goes off without a hitch, or a dissenting voice 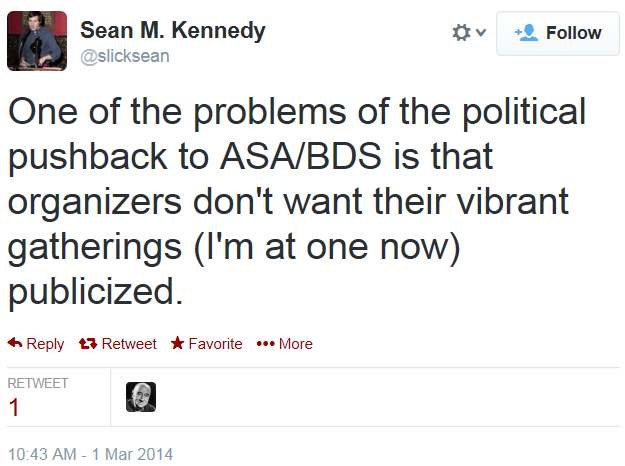 Friday and Saturday was the super-secret, closed-door BDS organizing conference held by NYU’s American Studies Department under the direction of Lisa Duggan, an NYU Prof. and incoming President of the American Studies Association.

Duggan, a big supporter of the anti-Israel academic boycott, apparently did not want dissenting voices present:

The agenda was stacked with anti-Israel professors. The lunchtime program explicitly was oriented toward organizing anti-Israeli groups on campus, including an appearance by someone from Students for Justice in Palestine. 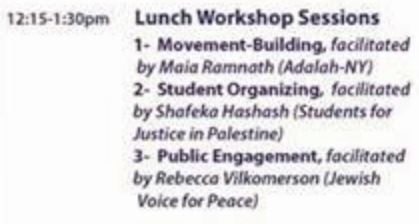 The conference was controversial not just because of the topic, but the one-sided stacking of the deck by an academic department and the exclusion of non-approved attendees. The event was not even open to all NYU students.

A group of NYU students wrote a letter of protest to NYU’s President, which reads in part:

From the beginning, this event has been shrouded in secrecy; Professor Lisa Duggan, the event’s sponsor (in a post that has now been removed) cautioned, “PLEASE DO NOT post or circulate the flyer. We are trying to avoid press, protestors and public attention.”

Invitations to the event were quietly distributed, leaving out any pro-Israel voices. Troublingly, the event is scheduled to begin and end (almost to the minute) with the Jewish Sabbath, ensuring that many Jewish students and community members will face obstacles in attending for religious reasons, a seemingly deliberate move by the organizers of the event to prevent the presentation of other views in this complex issue. Additionally, event registration was closed on Sunday following the release of news reports on the seemingly exclusive conference.

Despite political objections to the conference’s anti-Israel message, those objections are not the chief reason behind the penning of this letter. Our concern is that New York University, a global leader in education, is permitting the occurrence of an event which is antithetical to the principles which the global academic community stands for. If anything, the university condones the event with the administration’s disconcerting silence.

What happened at the conference? Little is known because it was closed. There were some tweets by an attendee (h/t Elder of Ziyon) indicating that the conference was, as billed, completely one-sided against Israel: 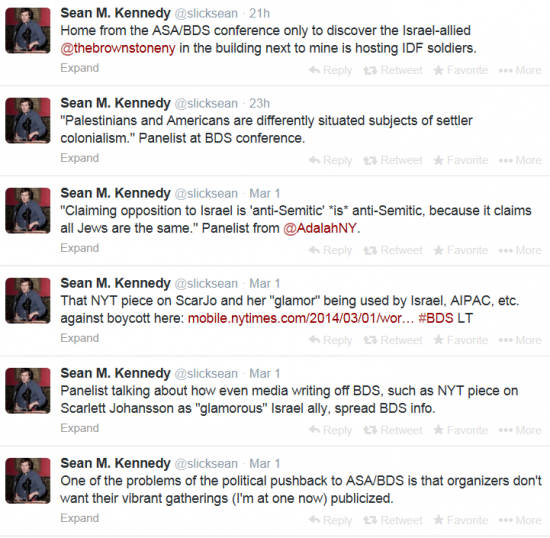 Note that last (first in time line) tweet (Featured Image).  BDS supporters in academia now are afraid to have their ideas subject to cross-examination and criticism:

One of the problems of the political pushback to ASA/BDS is that organizers don’t want their vibrant gatherings (I’m at one now) publicized.

Academic vibrancy in boycott lingo means freedom from criticism. And freedom from those who dissent on the issue of Israel and the academic boycott.

A WSJ editorial on the writhing death-struggle of Anthropomorphic Global Climate Whatever applies here, too.

“These are indications of a political movement turned to defending its self-image as its cause goes down the drain. That’s how thoroughly defunct, dead, expired is the idea that humanity might take charge of earth’s atmosphere through some supreme triumph of the global regulatory state over democracy, sovereignty, nationalism and political self-interest, the very facts of political human nature.”

These people know they’ve lost, and their only receptive audience is others in the cocoon.

And it all goes back to the same basis…

the constructs they use are fantasy.

In their efforts to marginalize anyone not agreeing with their perspective, they marginalize their own basis. Thanks to those, like Prof. Jacobson, who will not let this go unnoticed or be put aside, the win is in the tell of their need for back door, secret code entry.

People in their late teens and early twenties should not be allowed in colleges or universities. They already know everything there is to know so they don’t need to be there.

Minimum age for college admission should be 40 and only on the condition that you pay tuition with money you and only you earned.

To be awarded tenure a professor must have a minimum of 4 years experience as a bus driver, electrician, plumber, mechanic or heavy equipment operator.

This “kick-ass conference”? “Are you drooling yet”?

These are dangerous little children.

so, did anyone attending have their mind changed by opposing arguments? No. “We’re not losing audience, I, I, I just think
that the.. uh.. their appeal is becoming more selective”

Turn on the light, watch the cockroaches scatter.

I’ll bet their “academic” papers are a scream.

Well, you have to close the room to achieve the perfect echo.

Movements like this that bubble out criticism last just as long as science that refuses to let anyone attempt replication. Not long.

Sounds like Ms Duggan and her friends would be perfectly happy helping Sandra Korn replace academic freedom with “academic justice”.

I have nothing witty to say. This movement is obscene. I demand that Medina be given back to the Jews.