Take nothing for granted. 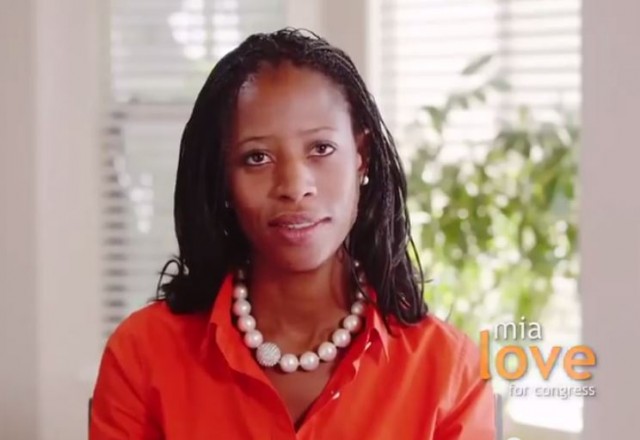 It has been a long time since we wrote about Mia B. Love, running for Congress in Utah-04.

We first covered Mia — and were the first to cover her campaign — in early January 2012, when no one gave her a chance of getting the Republican nomination, Mia B. Love – A conservative political star rises in … Utah:

I remember calling her when her campaign was in its infancy, and she actually picked up her cell phone and gave me an interview as she was in the car driving to an event.  She seemed so happy that someone, anyone, was calling with interest in her candidacy.

Back then, when I Googled her name for background, there were so few mentions of her that most of the search results went to — well, you can imagine with a name like “Mia B. Love” that some of the search hits were not about her and NSFW.

Mia came on strong as the conservative blogosphere rallied around her and brought attention to her campaign. She won the Republican nomination at the convention, but lost the general election by a few hundred votes to Jim Matheson, a long-serving Democratic incumbent who repeatedly defied the odds in a Republican district.

Now Mia’s running again, and the polls show her far in the lead, as reported by the Salt Lake Tribune:

Republican Mia Love has a strong lead in Utah’s 4th Congressional District, but she’s far from dominating, according to a new poll released Monday.

The survey by Zions Bank and UtahPolicy.com shows Love with a 12 percentage-point lead — 44 percent to 32 percent — over Democrat Doug Owens.

Nearly a fifth (19 percent) of respondents were undecided in the poll conducted Thursday through Saturday for the political newsletter published by LaVarr Webb, a lobbyist and consultant who is not working for either campaign.

This poll, conducted by Dan Jones/Cicero Group, comes two weeks after Owens released his own internal poll showing him 9 percentage points back, 50 percent to 41 percent….

This Love-Owens race is expected to be the most competitive congressional race in the state. It is the only one without an incumbent. Rep. Jim Matheson, D-Utah, declined to run for an eighth term.

The UtahPolicy poll indicates that if he did, he’d have a six-point advantage over Love, 45 percent to 39 percent, with 12 percent undecided.

Her first campaign ad still is my favorite:

There is no such thing as a sure thing, so go ahead and donate to her campaign, because you don’t want a “what-if” moment in November.

This lovely young lady and first generation American is a WONDERFUL model for the reform movement in the U.S.

My daughter in Utah is not in her district, but is working for her.

Unlike flakes and awful candidates such as Sharron Angle and Christine O’Donnell, Mia Love is the real deal.

When you call Sharron Angle an awful candidate, you are supporting Dingy Harry. Sharron won every county in Nevada except one. And I seriously question the integrity of that one county’s election department. As far as O’Donnell goes, it is really hard to explain one’s entire life in sound bites. There was way too much media attention on her.

Unless you’re a leftist democrat, don’t use their memes.

A few years ago she knocked on my door and was seeing if I had any questions for her about her campaign and the platform she was advocating.

She woke me up, and she was shorter than I thought she would be, but it was a pleasant exchange. I liked that she put boots to the ground and tried to meet the people in the area.