Just minutes ago, Mia B. Love won the Utah-04 nomination at the Utah Republican Convention.  Love received 70.5% of the vote on the second ballot, defeating Carl Wimmer who received 29.5. 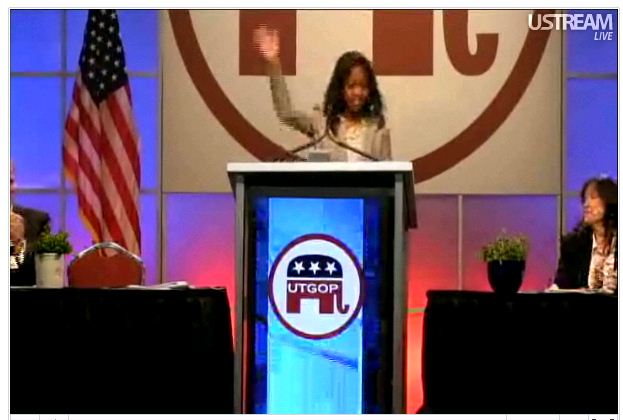 The result is a shock except to those of us in the blogosphere who have been following Love.

Just three months ago Love was relatively unknown, but through her hard work on the ground and the coalescing of the conservative blogosphere around her, Love gained traction and now pulled off the once unthinkable.

When I spoke to Love in early January, Love was hoping just to make a primary against favorite Carl Wimmer, who had the backing of Mike Lee, the Club for Growth, and many state politicians.

Now Love stands alone heading directly into the general election, facing the vulnerable Democrat Jim Matheson, whose prior district was carved into multiple pieces, forcing him to run in the new 4th District.

Matheson has money, and big national Democrat backing, but as recent polling shows, he is beatable.

Update:  In a show of unity, Carl Wimmer (just to Love’s right in photo) joined Love on stage, endorsed her and pledged his support to help her defeat Matheson: 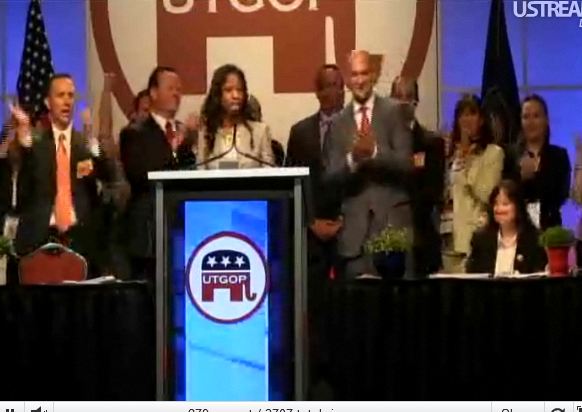 I’ll have to send some money.

1. Love has already exceeded my expectations. In the second round she got all the non-Wimmer votes; even a few Wimmer votes flipped to her.

2. Last week, referring to the nomination and the general election, I posted:

But if Love pulls off the double upset…wow!

3. Kudos to our host for spotting a winner.

4. And Orrin Hatch is getting primaried! So tell me again that the Tea Party is dead.

Golden Oldie: Love Is In The Air

Good for Love and for Wimmer so quickly supporting her.

Exactly. Now if only Newt and Paul would do the same.

I’m sending her more money. And good on Mr. Wimmer for his unity.

As for Congressman Matheson, maybe he’ll make the same fake pledge Senator Manchin did about not supporting Obama. The party of dems is now the party of Alinksky and Marx, rather one of Truman and JFK, and I say this as a recovering democrat.

Love how the repubs reliaze there are millions of new independents who want fiscal sanity, we don’t care about party, we want debt, spending govt itself reigned in and contained as the founders intended.

Ms. Love seems to get this. I am definitely rooting for her and encouraging everyone I know to donate to her.

That is great news, I congratulate her, and it’s on to win the election itself.

Mia’s win is like a “Ray of Reagan Sunshine” in this world of destructive liberal politics and politicians today, as we the Reagan Constitutional Conservatives fight on against liberal forces on both sides of the political party fence.

Actually its not “liberal” forces, as much as it is “progressive” forces. I always and still do consider myself a liberal, a classical liberal, the way the word was originally defined, and is still defined in Europe. Less govt, more indiv freedoms, more free market, not crony capitialism aka statism.
Progressives are the newer breed, they want to “progress” past the US Consitution, which was intended to contain govt to protect the rights of an individual citizen. Conservatives want to “conserve” the original intent of the Constitution, just as those classical “liberals” want to as well.

We are all united against progressives, statists, etc. or whatever they want to call themselves next.

thank you, alex. I agree. Classical Liberal = lover of Constitution and Freedom.

This is great news indeed, and it is good for Wimmer to stand up in support and unity. This will help get the party behind Ms. Love immediately. Everything I’ve read about her is impressive.

One key point: she had better be prepared for the progressive nastiness that’s sure to follow any successful Republican minority woman candidate. Don’t melt, don’t lash out: use humor and keep your eyes on the prize. That goes for all of us.

A commanding win like this is good to see. Maybe Utah can show Republicans how to unite behind a candidate. Somehow, the left will see racism in this choice. They can’t help themselves.

Liberals Pushing For More Women In Politics Will Hope This Woman Loses « Society Bytes | April 22, 2012 at 1:40 am

Oh this is a feel good!

Ok -in the spirit of race what is a black person of Haitian descent ?

Just to add another layer a Mormon to boot with a crazy Russo-italian name of Lyudmya.

Come on, this is a huge shock, an earth-shattering win against the deserving favorite! Even her most ardent supporters were only hoping she would make the primary ballot, not such a consensus win as this.

That name – I have it worked out. it is the American spelling of the French pronounced Lyudmilla.

So no Italian (which would be the Mia bit ) .

We had two winners…..The Tea Party and Mia Love!

Will send money next payday – and proud to do it!

Racist, Sexist Republicans Nominate Mia Love In Double-Negative Ritual : The Other McCain | April 22, 2012 at 11:05 am

[…] have been waging a war on women, as indicated by their opposition to ObamaCare. Thus, via Legal Insurrection, we discover that Mia Love is the nominee for UT-4.There is no way this could be motivated by […]

For those wondering about the electoral makeup and shape of the new Utah 4th Congressional District I found this in the Desert News from December:

The 4th District covers heavily populated southwestern Salt Lake County — an area Matheson represented early in his career — and western Utah County and more rural Sanpete and Juab counties. It is the smallest district geographically, and though largely Republican, it has more Democratic voters than the other districts.

Even as a novice up against a veteran, Love looks to be in a pretty decent spot here.

Politically speaking Shurtleff was right.Mia Love is a “novelty”. Wimmer had a better chance to beat Matheson than Mia Love. I’m glad Wimmer didn’t win. I’m a Matheson voter but I’m smart enough to know that the radical right and the tea partyers would have rallied around Wimmer and I’m sure they won’t rally around Mia Love. It’s their inate bigotry which will only allow them to give lip service to Love and then they’ll stay home. Utahn’s have never voted for a black man much less a black woman. And they are not going to start now. Matheson has positioned himself so close to the center that Mia Love would have to adopt the Fox news mantra and run against every black issue ever promoted for her race and her people. Matheson and the Obama people willl play up to Mia Love , kissy pooh her and then dismiss her as another Repugnant anomaly. She can only win by adopting far far right policies to attract the tea partyers and the far right old white men of Utah and they will NEVER vote for her. In Congress the Black caucus will have her for lunch. They’ll give her a job serving on the needs of poor blacks of American and she’ll switch on the Utah Repugnants faster than Romney will do if he gets elected.So you see Mia Love is really a “political novelty”. The significance is only because she is a black woman and being politically correct is suddenly politically correct in Utah. If the nominee was a white man there would have been no clamor over calling him a “novelty”. In fact he would have cherished the appelation.

You know, someone really should remind the GOP Establishcrats that a Constitutional Republic was once a “novel idea” « The Daley Gator | April 22, 2012 at 6:33 pm