We Stand With our Blog Friends in Israel

We Stand With our Blog Friends in Israel

Pay a visit to and say a prayer for our blog friends in Israel. 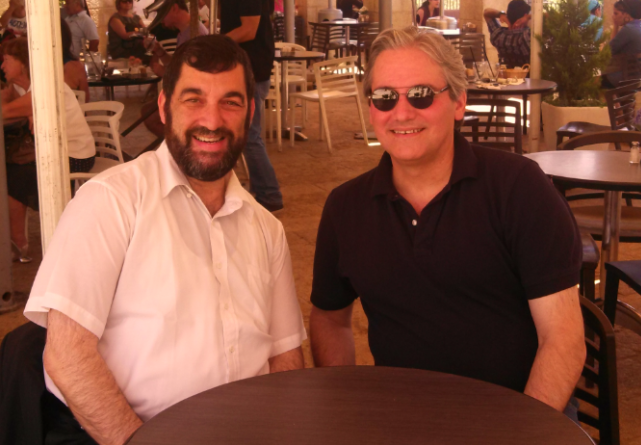 This is a little spooky.

Here’s a blog post I wrote in November 2012, the last time Israel had to deal with the terrorist alliance in Gaza and its rocket fire: 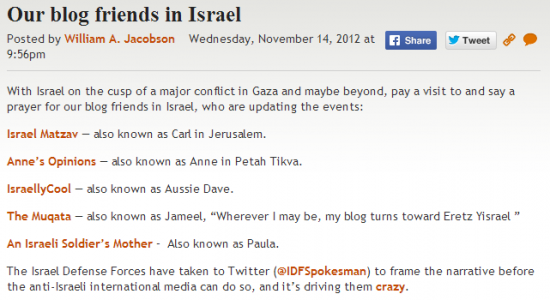 Since then, we have added more Israeli blog friends, many of whom I met on my trip to Israel last summer.

So once again pay a visit to and say a prayer for our blog friends in Israel. Let them know we stand with them.

IsraellyCool — also known as Aussie Dave and others.

NGO Monitor — also known as Prof. Gerald Steinberg and others.

The Muqata — also known as Jameel, “Wherever I may be, my blog turns toward Eretz Yisrael ” His Facebook page is the go-to place for updates.

David suggested these blogs as well:

If there is anyone else who should be on the list, post in comments and I will add.

Reader Carol reminds me that I forgot Caroline Glick. How could I have done that? I guess because I think of her as a force of nature, not a blogger.

Arlene from Israel (from the comments)

[Featured Image: Carl in Jerusalem (left) and I at the Mamila Mall][are the grammar police happy now?]

lol – about the “grammar police”!!

[The correct way to say that would be “Carl in Jerusalem (left) and I me at the Mamila Mall.”

I am a proud member of the grammar police, thank you. 😉 ]

As long as you don’t mess up the Hebrew…

At first glance, thought you were Michael Douglas.

I don’t know of any bloggers over there however if you know of any that need any help from me getting their words out on my site by all means let me know.
I’ll help whenever I can.

What? I was hoping to see you two guys doing the “Happy in Jerusalem” dance.

I pray for the Peace of Jerusalem.

I saw the most amazing photo recently that was supposed to be the Elephants in the Tel-aviv zoo forming a protective ring around their young while the air raid warnings were sounding.

I saw that too. Very moving, and frightening – the people there screamed when the bomb hit…..and the animals were making frightened sounds, cries.

To think that Hamas (Palestinians) is (are) telling their women and children to STAY put when Israeli warnings come that they are in a targeted area and be killed, to be used as human shields…..sick, evil.

Prayers for the safety of the innocent, and the swift apprehension and punishment of the murderers.

Really they should not have kidnapped & killed those 3 boys. That was asking for it . I think Israelis are prepared to suffer the blows amongst the action.

Never should we think we or our particular friends are above the fray . Winning requires losses that are much less than the opposition . Can’t expect none or that they are people we never heard about .

Israel gave up 77% of the land allotted for a Jewish homeland in hopes of peace with the Islamists. http://www.justicenow4israel.com/mandatemap.html

Every other surrender of land has been futile. Peace is not impossible with these people.

Islamists want all the world’s land and no Jews to exist. Islamists have been systematically invading every country on earth (except Japan, which does not allow muslims to immigrate). In every country muslims immigrate, they cause trouble and misery.