The story of Elizabeth Warren the media acolytes do not tell. 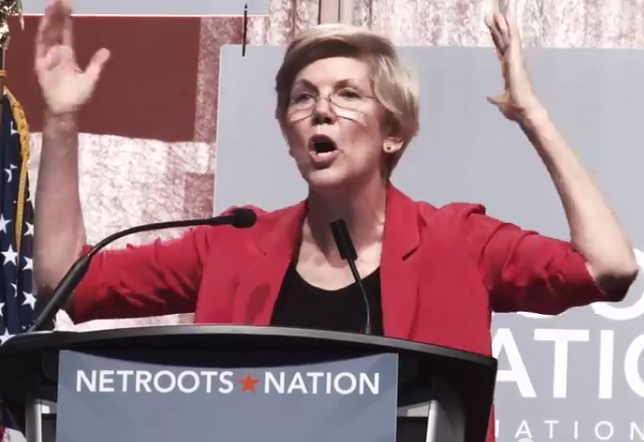 With Elizabeth Warren reaching cult status, and momentum growing to convince her to run for President, it’s worth keeping in mind that Elizabeth Warren’s career is nothing like portrayed.

No, I’m not just referring to the Cherokee deal. From her legal representation for large pay of the biggest corporate interests to questions raised by other professors about her academics, there is a story behind Elizabeth Warren which is at risk of going down the memory hole.

That’s the main reason we created ElizabethWarrenWiki.org — to preserve the record and the research.

It’s also why Twitter user @Coondawg68 has created a Storify, Liz Warren #RunLizRun on the occasion of Warrens star appearance at Netroots Nation (the left-wing blogger gathering). It is an accumulation of much of Warren’s story via tweets, some of which are pugnacious, but most informative as to the historical record:

The full sequence that will not require you to click through is below:

Prof. Jacobson, I think you ARE a media acolyte … just of the truthful, alternative, watchdog internet media.

The real story of Warren may be preserved by the Professor but, as we have seen throughout this administration, the major media will (1) make believe it doesn’t exist and (2) viciously attack anyone who even dares to ask the questions.

They will do the same for her.

Scott Brown thought no serious person could look at Warren and consider her. He didn’t understand how many unserious people there are.

She may be a shameless hypocrite, a laughable fraud and a walking liberal stereotype, but this is precisely why conservatives should never dismiss her as a candidate.

I’ve done a fair few consumer bankruptcies, and NOT ONE was directly attributable to medical costs.

That rant is epic.

I welcome Elizabeth Warren in 2016. Not because she couldn’t win (scary as heck), but because we need the debate right out there in the open.

As a single mom under the poverty line, I am tired of Warren (and other Democrats) claiming to speak for me. I responded to each of Warren’s “eleven commandments” here. http://www.lisagraas.com/2014/07/19/elizabeth-warrens-promises-same-as-the-old-promises/

Ever notice that Barack Obama doesn’t go to fundraisers with the poor or working classes. It’s always the “1%”

I like the Chris Coon riff on Ma Warren.

“1st breast feeding mother to take the NJ Bar?” If I were her kid I’d wish I wasn’t; probably curdled milk.

Don’t worry, folks – help is on the way!

WaPo is reporting via Gary Hart, his Yale Law classmate, that California Governor Jerry Brown is contemplating running for President, too.

A powerful slogan: “Let me do for America what I did for California!”

The LIVs might eat it up – California, isn’t that where they make movies and TV and the Kardashians live?

Kardashians in the White House

Next up on E!: what did Khloe do in the Oval Office that has Kim shocked and amazed?

If Warren does decide to run, and an ego that big must surely do so, the battle between the Warren cult and the Hillary “Clintonistas” should be fun.