OUT: Cult of Obama // IN: Cult of Warren

OUT: Cult of Obama // IN: Cult of Warren

Warren has even created a list of “progressive commandments.” 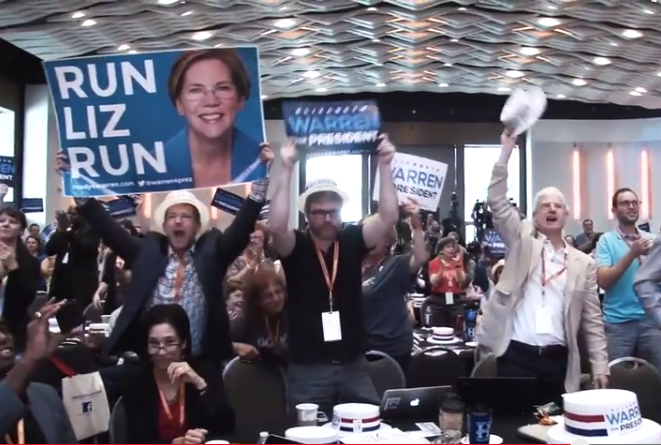 In many ways, Elizabeth Warren is the perfect Democratic Party candidate to follow Obama. First term senator? Check. No major accomplishments to speak of? Check. No executive experience? Check. A questionable life story that the media refuses to investigate? Check. She really has it all.

The progressive base of the Democratic Party recognizes her potential and just like they did with Obama, they’re already creating a cult of personality around her.

If you can stomach it, listen to this new song created by the folks at Ready For Warren.

It’s not a presidential campaign in America anymore until someone puts their progressive hero-worship for a Clinton challenger to music.

The contrast in styles with “Yes We Can” is revealing. That song was celebrity-heavy and hymnal, both of which fed the idea of Obama as icon. He was an object of veneration, the left’s epitome of cool. Warren doesn’t have one one-thousandth his personal charisma and, unlike him circa 2007, she does seem to care about policy on the merits, beyond whether a given position will help or hurt her nascent presidential campaign.

For her part in the transformation of politics into religion, Warren has created a list of progressive commandments.

Speaking on Friday at Netroots Nation, a convention for liberal bloggers and activists, Warren got the crowd more fired up than Vice President Joe Biden was able to do the day before. (To be fair, the crowd was in a solemn mood at the time in reaction to the news of the Malaysian passenger plane crash). In her speech, Warren outlined more clearly than other Democrats the social issues that galvanize progressives. Her performance was reminiscent of a certain other young senator in 2008.

“What are our values?” Warren asked the audience, some of whom held up “Run Liz Run” signs. “What does it mean to be a progressive?”

She went on to outline 11 tenets of progressivism:

– “We believe that Wall Street needs stronger rules and tougher enforcement, and we’re willing to fight for it.”

– “We believe in science, and that means that we have a responsibility to protect this Earth.”

– “We believe that the Internet shouldn’t be rigged to benefit big corporations, and that means real net neutrality.”

– “We believe that no one should work full-time and still live in poverty, and that means raising the minimum wage.”

– “We believe that fast-food workers deserve a livable wage, and that means that when they take to the picket line, we are proud to fight alongside them.”

– “We believe that students are entitled to get an education without being crushed by debt.”

– “We believe that after a lifetime of work, people are entitled to retire with dignity, and that means protecting Social Security, Medicare, and pensions.”

– “We believe—I can’t believe I have to say this in 2014—we believe in equal pay for equal work.”

– “We believe that immigration has made this country strong and vibrant, and that means reform.”

For a woman who’s not running for president, Elizabeth Warren certainly is revving up Democratic primary voters.

It’s just a matter of time before liberals start forcing their children to sing songs about her.

For the truth about Elizabeth Warren, be sure to visit ElizabethWarrenWiki.org and spread the link around.

That Run Liz Run song, is it from Portlandia?

you can longer tell parody from real. The Left has become the stereotype. Maybe that’s why they believe in reinforcing and holding people to stereotypes.

Sickening. Melanin and chromosomal politics is all they have.

I will write no more on this, because I’ve probably landed in the NSA’s in-box a couple of times already, today.

LOL … trust me, we are ALL in the NSA’s in-box. I figure I keep those guys busy buying more RAID drives.

Yes, by all means replace a incompetent boob with another incompetent boob. Voting for phenotypic diversity rather than for character, skills and accomplishments worked out so well the last 2 times that the 3ed time will be the charm.

Interesting, her platform/commandment-set advances nothing novel. So her second tier has not, yet anyway, sprung a new active measure. It seems tired. A brittle battle line without a fresh kinetic force and, other than probably lots of money, no serious ammunition (fresh propaganda) logistical train. Old dogs in a new grooming but minus a new litter. Also, she has a record than cannot be hidden, whereas 0 did, being, as Codevilla pointed out, from the CIA. She does have the ambition and fervid willingness to lie for it. She is not a man’s view of an attractive female, much less woman or lady. Hillary is more so, though faded. My money remains on Jarrett as DNC nominee for POTUS in 2016. No one expects her to be attractive, just devastating, for which she has an exceptional record.

Obama offered nothing new either. Democrats had been pushing nationalized health care since at least the end of WWII. Ted Kennedy became the poster boy with his 1972 book In Critical Condition. “Stimulus” and “shovel-ready projects” is just FDR Redux. And free easy monetary policy enabled LBJ to get the Great Society crap enacted.

The Left hasn’t had a new idea in half a century at least.

And considering how awful all their old ideas have proved to be, that’s a good thing.

True, but misses my point, which is electoral. The electorate’s patience with the bean diet is subdued. That is why DNC has to bring in vast electorates from outside who will swear that beans, beans, beans is just fine and get them registered good and quickly and into the voting booth. My gardener is fed up with beans diet.

Exactly … we are witnessing a change in the DNC diet … going from fried chicken, okra, and watermelon to beans, rice, tacos, and salsa. Not politically correct mind you … but correct nevertheless.

Oh, barf. If I have to go through another election cycle like the one in 2008 with the immature high school antics like the Obama campaign, I may die of embarrassment for my country. When did we go from the most free thinking, freedom loving, individualistic, self-reliant country on earth to this pathetic whining mess? God save us from ourselves.

The woman sitting in the foreground, wearing the dark-rimmed glasses, looks to be trying to keep her lunch down.

Still a bit more Pete Seeger-ish than the Horst Wessel Song, but they’re getting closer.

Warren High Cheekbone’s manifesto is a snapshot of the two forces vying for the ruin or restoration of this great nation.

“We, the sanctimonious Extortionists, Bankrupting Statists and Purveyors of Class Warefare…”

“We the People of the United States, in Order to form a more perfect Union, establish Justice, insure domestic Tranquility…”

Her eleven things all start with “We Believe” … she just needs Oprah to start the chanting, plus some halos on her head.

My attempt at skewering her eleven:

Stronger rules for Wall Street, but no prosecution for Biden’s buddy Corzine that broke into the clients’ funds, took and lost $1.6 Billion. Or Raines and Gorelick that cooked Fannie books to ensure tens of millions in bonuses.

Raise the minimum wage because teenagers don’t need jobs where they learn to work, and adults that have not worked their way up deserve employer based welfare. Will minimum wage be based on local cost of living, or one size fits all?

More picket lines, and more “solidarity”. Right, because more small business needs to be run out of business by workers walking out, after the employer risked his capital. How about, when your boss invests in your training, you agree/contract not to extort the owner with a strike?

Education without debt … get a job first. Or learn something other than liberal indoctrination from tenured Marxists. And don’t treat college as extended high school, with more sex and drugs, with someone else funding the ride. Consider the investment of your own damn money, and let the college (not the taxpayer) insure that your $100K education provided a positive ROI.

Protecting social security, Medicare … by raising health costs and forcing 0% interest on retirees’ savings for a decade, to help float the too big to fail banks, as they get even bigger.

Equal pay for equal work … which we already have, and current quotas are prejudiced against males. Still a great talking point since many women think raising kids at home is pretty awesome, while their man does the grunt work of earning money. But that is not the kind of empowerment these “feminazis” want. It takes a feminazi village to raise a child, not a Mom/Dad family.

Equality in marriage … means male equals female and protecting the father and mother family is a hateful thing, not an essential thing for any society ever. And she hints that maybe we should have a quota system to force that 1.6% gay (by choice, these are not former slaves) population, openly into your workplace.

And immigration through Ellis Island (and low immigration at times) made our country strong, so illegal immigration of millions that would never have passed through, (and will never learn what makes America strong, but will go straight to lifetime entitlements) is the same thing, because open borders to one third world demographic equals closed borders, and 2+2=5.

Anyway … it takes a lot of faith, so Warren needs to go with the sloganeering, and a lot of “I Believe” chanting and fist pumping.

Purty good. Just about right on all counts.

I’ll be saving that, if you don’t mind. When I repost it, it will be with proper attribution.

Remember that Obama only won by pretending to be “post-partisan” and to “end the bickering in Washington.” That, combined with the hyper-turnout by ignorant youths and minorities caught up in the “historic” nature of his candidacy and the vapidity of “Hope and Change” and “Yes We Can,” added to a slightly lower turnout of white married voters, might not even have been enough.

But McCain, having slipped a couple points in the polls, made the idiotic blunder of “suspending” his campaign when the financial crisis hit, as if Senators were critical or something. He didn’t look like a President then, and Obama won.

Lies and oppressing the opponents’ groups with the force of government got him reelected, again with the cooperation of stupid white voters who failed to turn out.

There is not now, nor will there will be any groundswell of public support for overt socialism, which is all Warren has.

Off pitch parody of a Joan Baez tune?

I am SO ready for Hillary and Lizzie – it’s going to be one swell cat fight!

Democrats, in other words?

God only knows what the world will be like in 2016 . I am not sure there is the luxury for this navel gazing extended 20 month presidential election this time .

Europe may be freezing & Ukraine may be starving this winter .Israel / Iraq/ /Iran /in Syrian levels of attrition .

Is this a commercial for irritable bowel syndrome?

We have now proved this twice: Atheists have to believe in something, even if that something is an idiot.