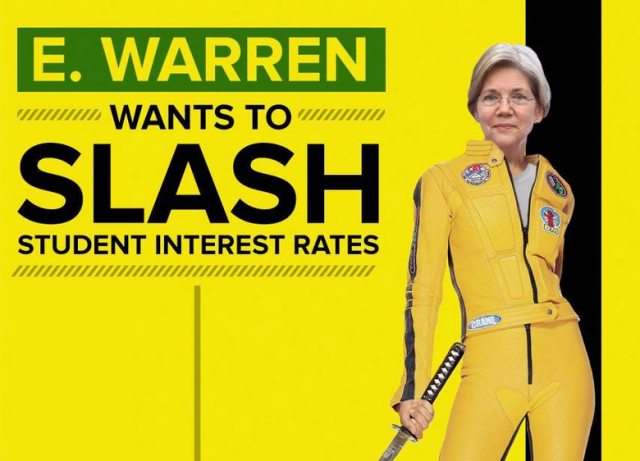 I know, you thought I’d been trolling you these past few months with all my writing about how Elizabeth Warren might actually run for President, and how she would crush Hillary if she did (and they both know it).

But I wasn’t trolling.

Warren’s surge in the Wisconsin delegate straw poll was noticed mostly only by us, but was a sign that there could be a groundswell of support.

Despite all her present tense denials, there is no doubt in my mind that Warren is seriously considering running but waiting until Democrats demand it.

Warren is a unique political talent, in ways we have been documenting since early 2012. There is no one on the political scene today who plays upon and preys upon a sense of victimization and envy as well as Warren.

So it doesn’t surprise me that Ready for Warren has formed, as reported at HuffPo:

An enthusiastic band of activists has launched a campaign to slow the momentum of Hillary Clinton and convince Sen. Elizabeth Warren (D-Mass.) that she should run for president in 2016.

“I think there’s an opportunity for us to convince her if we’re really able to make the case as to why we think she’s the right person,” said Erica Sagrans, who has signed on as the Ready For Warren campaign manager.

Sagrans, who worked on President Barack Obama’s re-election campaign, will be joined by political activist Billy Wimsatt, who previously founded the League of Young Voters and is going to be a senior adviser to the new group.

They are not intimidated by the well-monied Ready for Hillary:

Let's get one thing straight: Elizabeth Warren is running. http://t.co/6hfySTsipE

You think they would have learned from Wendy Davis.

dang it please include Elizabeth “Redskin” Warren in your title

Elizabeth Warren is nothing like Wendy Davis as far as attracting non-base voters. But I still don’t see how she could pull in the needed independent voters without just absolutly misrepresenting her positions. Or perhaps “evolving” if only just to get elected.

Independent voters, unless conservative, will fall for the media gushing over the possibility of the ‘first woman president’ just as they did for the ‘first black president’.

The script has already been written for this coming election. Hillary is out. Warren is in.

You can already see it. The press has simply stopped running interference for Hillary. Her latest gaffes, poor book sales, and general tone deafness are the same as they always were – except this time there is no slavish press covering it up.

They’re just going to give her a year or so to continue floundering about without cover. Her approval will drop as without lapdogs in the media she’ll be exposed as the tone deaf, shrill, talentless person that she has been all along.

It will be Obama all over again, except replace ‘racist’ with ‘sexist’. Anybody that disagrees with anything she says will be denounced in every liberal rag as ‘just more of the Republican war on women’.

I’d like to think that it won’t work this time, but unfortunately in 2012 the American public really proved how truly stupid and gullible they are to BS like that.

Obama burst upon the scene as a cipher – he even described himself as “a blank slate upon which different people can inscribe what they want to see” – with a vague record of voting present and being a “community organizer” and at a moment the nation was weary of war and of the two-term President of the other party. Had he not run on “ending business as usual in Washington” but instead as “Stalin on Steroids,” he wouldn’t have stood a chance.

But how does Warren possibly pretend to be other than what she is? Her rabid leftism isn’t just a matter of family lore, it is all on the record, including her hypocrisy.

For the Far Left, she is The One to Follow Barack, but she has no appeal to middle of the road and swing voters.

The Left has not learned. They will never learn. There will be anecdotes about a few here and there who gave up the leftist ghost after they are forced to feel obamullah’s pain, but by and large they will be easily distracted and their understanding derailed by yet more leftist lies and obfuscations.

The indoctrination marches on and they are shoring up their new voting blocs while we are drained of resources and power.

I guess all the hoopla about Warren running is a feather in her cap. Whoops!!

It will be too easy to link her ideologically to Obama because they are both hard leftists.
Her cynical use of affirmative action tells you all you need to know about her “ethics.” And it will be the easiest thing in the world to demonstrate the hypocrisy: 1) tell the audience to look at her and 2) try imagining any time in Warren’s life when she suffered racial discrimination.

None of this matters to the hard left because they are utopian morons. They are political Moonies.

Elizabeth Warren could well self-destruct if she were to go full monty Socialist, which I suspect she will do.

Warren will be shrill and loud, demanding, repeating all the far Socialist “income equality,” fairness, all the other Obama hard left rhetoric and she shall promise to carry on with the Obama changes till the USA is fully transformed.

She’ll become the Liawatha Warren of 2011 – 2012, when her once claims of being part Cherokee will be a false legend, really just a “funny” joke she used once upon a time.

Yet, given a choice between her and another RINO candidate from the GOP, it might become a near run thing; pray for US then!

She won’t go full socialist. She’ll go Bubba-try to cast herself as Bill Clinton in pantyhose.

Obama was able to sew up the racist black vote (even though he’s no more African-American than Warren is). But fake Indians don’t make up much of a voting block.

But fakes and flakes in general do. Warren is made to order for single mothers, blacks, losers and soccer moms, so she will have a big tent. She will cast herself as trod-upon for this or that reason (Indian/female/whatever) and claim her policies will be much the same as Bill Clinton’s. She’ll never mention obamullah.

Professor,
I just do not see her appeal outside of Mass. I was not surprised when she defeated Brown. It is, after all, Mass. I just don’t see it translating to a National Audience. She is no Obama, and totally lacks his famous Jedi Mind Power. It would seem like desperate Democrat Wish Fulfillment if she were “forced” to run by a clamoring electorate.

I see tooth and nail fisticuffs in the future.

Wets her toes in the senate, ready to run for the Big Job, just like obamullah.

Vlad is liking this . Elizabeth commander in chief of the US forces. If the US generals are not girly enough now ,then gonna be barbie dolls in 2017.

Which reminds me , Marvel comics have decided Thor is in fact a goddess . Yes that Thor god of a Thunder , namesake of Thursday is now a drag Queen..

Evil Granny vs. Evil Crone. The Dems are incredibly desperate.

THIS… is gonna be fun!

Normally I’d predict a be co-evisceration, like the gingham dog and the calico cat! Except Hitlery has the Clinton smear machine behind her.

They’ll have the whole Cherokee Nation turned out in full regalia to denounce Liawatha, and suddenly the whole Leftist Media will discover that Warren lied about being American Indian and used it to her advantage. When Carville, Berger and the rest of the Clinton mob get finished, Warren is likely to be a bag lady working the off ramps of the Turner Turnpike between OKC and Tulsa.

Liawatha won’t be back in Soonerland anytime soon. Even if she’s humiliated beyond human endurance, she’ll always be welcome among the moonbattery of Cambridge, Mass.

What exactly does she want to slash rates to? Zero? Or maybe they should pay US interest? Last I checked my rates were down below 3%. I’d say that’s pretty fair in any world.

Let’s slash student loan interest rates! Yay! That worked out so well for us with home loans!

What does the Secret Service think about this new “Kill Hil” movie?

SHE SO UGLY!!!
Thanks for the free appetite suppressant, professor!!!!

I seriously want to know what they plan on slashing rates to. I currently pay less than 3% APR on college loans, which in any Dave society is quite good. Let’s focus on the real issues surrounding the higher education bubble instead of chasing some liberal bogeyman.