It’s been a while since we’ve focused on the Texas Governor race between Wendy Davis and Greg Abbott.

Davis’ now-infamous fudging of her personal narrative and Gumby-like political posturing stopped whatever momentum she might have had in its tracks:

PPP just released a poll consistent with the other polling:

PPP’s newest Texas poll finds Republicans leading by double digits in all of the state’s major races for 2014.

In the Governor’s race Greg Abbott’s at 51% to 37% for Wendy Davis. Those numbers are largely unchanged from our last poll of the state in early November when Abbott had a 50/35 advantage. Davis had a 39/29 favorability rating right after her famous filibuster last June, but since then voters in the state have mostly moved toward having negative opinions about her and now she’s at a 33/47 spread. Davis’ name recognition is actually 12 points higher than Abbott’s, but his reviews break down favorably with 40% having a positive view of him to 27% with a negative one.

As Logan Churchwell points out at Breitbart.com, Davis even is losing among female voters, 49-41 percent. 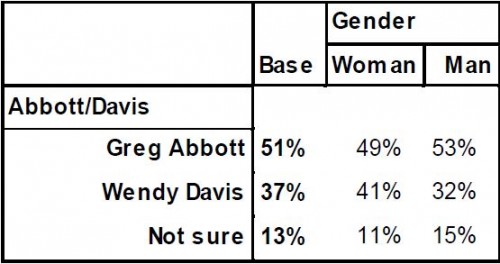 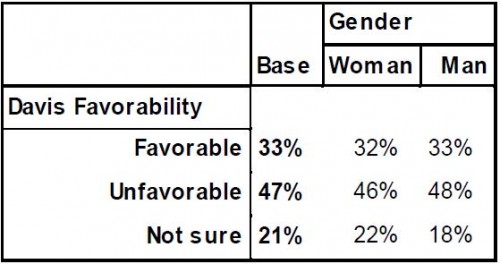 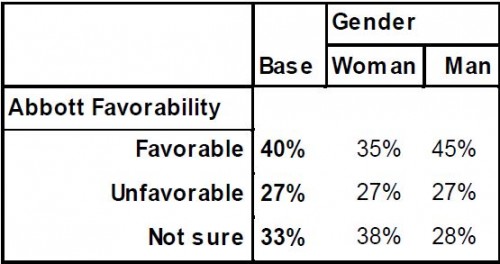 Time to stick a fork in the Davis campaign? Abandon ship?

I’ve gotta admit, she is kinda cute though!

Surely you’re not referring to the ankles in the photo above!

The salmon-colored shoes really clash with her varicose veins.

Alright, think of other democrat women: Hillary, Janet Reno, Nancy Pelosi, etc.
Besides, I never said I wanted to have sex with her, I just said I thought she was cute…jeeez!!!

Please seek counseling. This is a woman that relishes killing babies. I can promise you that any human who is so indifferent to helpless babies is also quite indifferent to any other human.

Since when does sexual Attraction have anything to do with morality. When I was hitting puberty I thought the Baroness on the GI Joe cartoon was cute. I guess the sexy enemy spy trope just shoots right past you.

Wendy Davis isn’t my thing, but we don’t call her Abortion Barbie for nothing

We are not on a GQ type blog – we’re on a high functioning conservative blog. As such, I expect moral and intellectual values to rank higher on the male attention scale than phyzzical. Billy Jeff behavior is never okay and I would never vote for a Bush because Pappy Bush thinks it’s just peachy to hang out with him and his wife thinks he’s one of her kids.

More to the point, I could never shut off the part of my brain that retches every time this Texas vermin is discussed. I loathe her and I think that is a mark of honor. Her affiliation and affection with babykilling-for-profit is something I cannot ever ignore.

That said, I’m sure the comment here was in jest but I feel the same way about that movie Airplane. Once I got my mind out of the leftist sewer, I became so ashamed that I ever thought pedophilia could be funny.

Before or after the physiognomy-altering surgery?

You should see Wendy suck a golf ball thorugh a 50 foot garden hose!

Or as Willie Nelson, Emperor of Texas, said, “She can suck the chrome off a trailer hitch.”

It’s tough to see when your eyes are rolled back in your head.

With all of the weird, false and stupid stuff her and her campaign is pushing, you had to go for the sexual slur? You couldn’t go after anything more challenging than the low-hanging fruit of oral sex jokes?

Jesus on a jetski. Step up your game, son. She has much wrong with her. Stuff that isn’t related to her sex.

If you want a vision of a Governor Wendy Davis future, imagine a pink running shoe stamping on the face of a baby.

(Tasteless, I know, but a position is a position)

They already have! I think……..maybe….they sure act as though…..

Not sure if I’m too late, but,

Happy Passover to the Jacobson Family!

In the words of Scar from The Lyin’ Ki.. err, The Lion King: “Run. Run away, and never return.”

Not Sure would make a great Governor and I am glad to see he is polling 33%. Met him one night in a bar in Bandera. He stood about 6’10” weighed 250 and had a wife who was a former beauty queen from Cut and Shoot, Texas.

One thing that I think is being ignored is that Wendy Davis corruption stories are leaking out all over, especially in very Democratic areas. The fact I have a pro abortion GOP state rep is proof of the supine nature of the state Dems, my district should be safe blue. But my neighbors, the ones who are pro choice but haven’t sacramentalized abortion, all think she is more crooked than Abbott, and the coverage in San Antonio and the Valley, on the border, is similar.

She will have depressed Suburban and Hispanic turnout. The most important race in the state is Dan Patrick/Dewhurst Lt Gov runoff. If Patrick wins, it might boost Dem turnout, or further depress GOP enough to elect Van de Putte, but even in that circumstance Abbott will be gov.

Still got to keep an eye out for mischief. Obama didn’t loan her his Organizing for America operation to take a loss for the team.

In case anyone hasn’t noticed, very slanted Texas Tribune articles are being used in local newscasts – in our market both the NBC and CBS affiliates are using their material and our local paper runs their stories in both the print and online editions and their newsfeed apps.

I have an emerging theory on immigration to Texas and the prog-wet-dream of ‘Turning Texas Blue.’

I’m beginning to wonder how many / what percentage of the massive influx of people into Texas over the past few years are actually frustrated Libertarians, Conservatives and Republicans who are fed up with prog cesspools such as Chicago, New York, Kalifornia, etc.

All we Texans hear from the prog drones is how they are going to ‘Turn Texas Blue’ blah blah blah blah. God the constant diarrhea from their mouths just makes me want to pick up a cinder block…. but I digress (and am speaking metaphorically for the benefit of the NSA).

But seriously, what if all that migration into Texas is turning her a deeper shade of red? Whoop!

She left her child with her husband (who was not the child’s biological father)to raise to go off to Harvard Law (when she could have gone to the University of Texas Law school), allowed the said husband to pay her tuition by emptying out his 401(k) savings (while she cheated on him), and the day after the last tuition payment was paid she filed for divorce. She sounds frankly like an ignorant skank.

Skank, yes. Ignorant, not at all. An ignorant tramp would not have been able to design and execute such a plan.

She’s a smart sociopath, in my view. All emotional responses you see from her are artificial intellectual concoctions, otherwise known as “acting.”