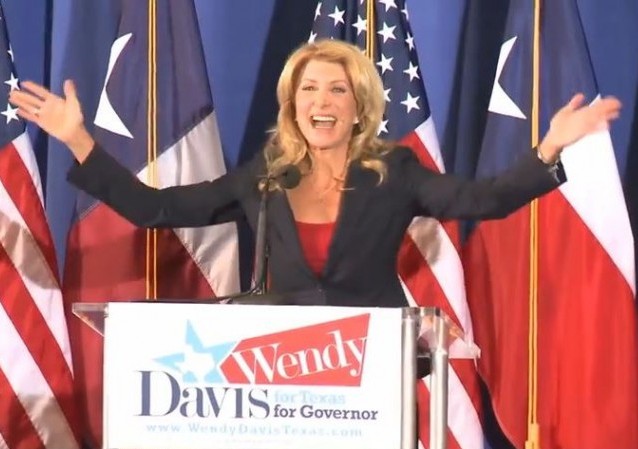 Erick Erickson caught a lot of flak for designating Wendy Davis “Abortion Barbie” because of her cluelessness about the Gosnell shop of horrors at the same time she was fighting a reasonable proposed requirement that abortion clinics meet normal surgical center standards and abortion doctors have admitting privileges at local hostpitals.

It was those standards, designed to present another Gosnell nightmare that mangled mothers and children alike, that was the focus of Davis’ ire, as Kirsten Powers noted at the time:

This is incredible. After all, Davis is the state senator who held an 11-hour filibuster to fight legislation drafted in response to the abuses at Gosnell’s clinic. A passing knowledge of the case seems like basic due diligence.

She went on: “But I do know that [Gosnell] happened in an ambulatory surgical center. And in Texas changing our clinics to that standard obviously isn’t going to make a difference.” It takes real skill to pack so many falsehoods into so few words.

With her personal narrative having collapsed, Davis has started pandering on issues such as open carry, infuriating her base.

But the Democrat said the state’s new abortion law didn’t give priority to women in those circumstances. The law allows for exceptions for fetal abnormalities and a threat to the woman’s life, but Davis said those didn’t go far enough.

“My concern, even in the way the 20-week ban was written in this particular bill, was that it didn’t give enough deference between a woman and her doctor making this difficult decision, and instead tried to legislatively define what it was,” Davis said.

The provision was part of a sweeping bill the Legislature considered this summer to place new restrictions on abortion providers. Davis initially filibustered to stop the bill, drawing nationwide attention as a special session ended with a raucous crowd disrupting the Senate’s consideration of the bill. Eventually, lawmakers approved the law in another session. Parts of it are under court review, though the 20-week ban is in effect.

Noah Rothman at Mediaite sums this shift up best, Wendy Davis Gives Up on Being Wendy Davis:

And, with that, the face of the opposition to that divisive law abdicated that role. This is the latest in a string of efforts by Davis’ campaign to soften her stance on abortion restrictions, but this and other statements stand in stark contrast to the state senator’s pronouncements while she was still basking in the national media’s limelight.

“Other women of course should be able to define their own destinies and this idea that the heavy hand of government should somehow come in and tell her how to do that is deeply resented in [a] state like Texas,” Davis told The Huffington Post in June of last year. “It’s deeply resented everywhere, but if you know anything about Texas, we hold very strongly to our traditions and our values where personal liberties are concerned.”

“Sen. Davis’ filibuster was a turning point,” Allan Saxe, an associate political science professor at the University of Texas at Arlington, told the Fort Worth Telegram in December. “It is a perfect example of how events can turn things around quickly.”

They sure can. Maybe the Lone Star State’s Democrats will want to take a second look at the politician they have been grooming for years to become the face of their party in Texas now that Davis’ novelty looks increasingly like amateurishness.

In hindsight, maybe the anaology to Barbie was inappropriate, but not for the supposed sexism reasons usually argued.

Gumby may be a more appropriate analogy, because on her personal narrative and key policy positions, Davis is infinitely flexible.

It certainly seems that Wendy has MANY positions. The first being missionary..

You beat me to it, Rags. She’s also got more positions than the Perfumed Garden.

Well, it’s still arbitrary, and it’s 4 months after the earliest evidence of consciousness. It is a plea to ignore the issue… No, it is a plea to submerge the issue, and calm the rising dissent.

It should be self-evident, and people probably have an intuitive understanding, human life evolves from conception to death. That’s where the conversation should begin. The next step is to reconcile that fact with our moral standards, before we choose compromises which undermine both.

There’s gotta be someone else running for that nomination! Even Bill White can give it another try!

The stupid! It hurts!

Before too long, Miss Wendy is gonna be talking about, “…them stankin’ lib’ruls…” and asking, “Hey, any ‘a y’all ol’ boys got some chaw? Day’s Work if ya got it.” Don’t be surprised if she gets some deer heads for her office and starts wearing a Resistol hat and Tony Llama full-quill ostrich boots. Then, Wendy will surely start droppin’ the ‘g’ off -ing words.

Win. At. Any. Cost. It worked for Barack “If you like your doctor…” Obama.

$5 says she had family at the Alamo.

I mean, I thought she was misguided and dumb, but at least I had a bit of respect for her that she had chosen an issue to make her stand on.

Now it turns out that it isn’t even important enough to stand her ground on.

Stick a fork in her, Abortion Barbie is done.

I bet she can pin her ankles behind her ears and do that thing with the cocktail cherries.

To us, this is opportunistic and cynical. Of course, because it is. But to her and those who support her, it means nothing. This is how they roll. In my opinion, her supporters know this is a sham; they know how she REALLY thinks, and how she’ll REALLY act once in power. It’s a tribal thing. We’ve entered the post-post modern age of politics in which leftists say anything and modify anything to get power, then do whatever they want once they have it. I predict this change will not cost her voters on her side. I think it actually strengthens her chances.

You’re right; she’s doing an Obama. Fortunately for us, she’s doing it backwards. He pandered to middle class voters ceaselessly as a candidate (the deficit is irresponsible), and reversed after elected.

She missed the part about waiting until after you’re elected to go into reverse.

The voters need to be reminded how these pols, the Dims especially, will just flat out lie to get elected and then change their colors once they’re in office.

This vile slut cannot be trusted.

What a phony opportunist. She moves further right on the political spectrum every day. She’ll be to the right of Abbott soon. If she thinks it will help her, she’ll probably join a Tea Party, start wearing three corner hats, and wave around a Gadsden flag at campaign events.

It wasn’t Wendy Davis that labeled her pro late term abortion. It was you people. She was fighting to keep women’s clinics open and free from idiotic legislation that was intrusive in women’s lives. You all are the ones who made it all about late term abortions, she didn’t. I see nothing two faced about her beliefs. And, by the way, you all should be happy that she seems to be agreeing with you on some things. Keep your governmental noses out of our vaginas, that is what we ask.

Yep…Kermit Gosnell was a hero and it’s completely crazy to expect these clinics to meet the same minimum standards that your dentist office does.

Sorry, but if you want to spend my money on it, then I get a say in it. Abortion Barbie launched her platform on abortion for anyone, at any time for any reason and FREE FREE FREE!

That may fly in your union infested proggie cesspool up there, but down here it just doesn’t fly. So why don’t you just stay there, and we’ll send Abortion Barbie up your way and we can all be happy?

Keep your governmental vaginas away from our guns, and maybe we can talk.

I don’t want your gun and neither does Wendy Davis.