Galway Univ: Shout down of pro-Israel speaker “unacceptable” and “will be investigated immediately”

Galway Univ: Shout down of pro-Israel speaker “unacceptable” and “will be investigated immediately” 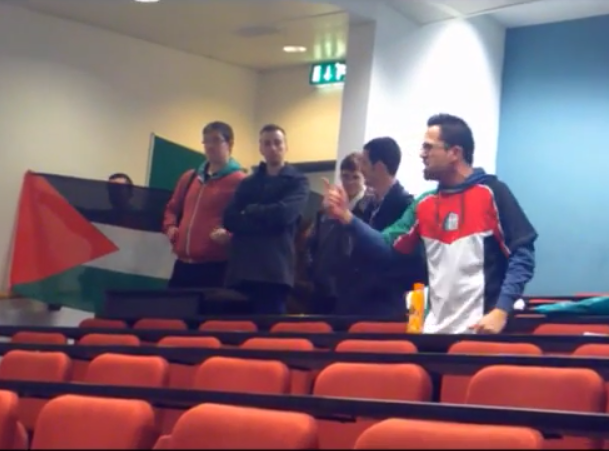 This video of an anti-Israel Boycottt Divest and Sanction activist at National University of Ireland – Galway, shouting profanities at Professor Alan Johnson of the Fathom journal, is beginning to get attention after our post about it on Friday. Johnson supports a two-state solution and is against BDS.

The video, obtained by the Irish for Israel, features NUI Galway student Joseph Loughnane shouting as a row of students behind him banged on the tables in support and themselves shouted (off camera, as video panned towards speaker):

We reached out to the President of NUI Galway for comment, and received an email back from NUI Galway press and information officer Tomás Ó Síocháin, with the following statement on behalf of the university:

They must, however, act within the law and in accordance with the University’s code of conduct.

The behaviour portrayed is unacceptable and has no place at any forum of discussion or debate.

This matter will be investigated immediately.

NUI Galway has a long and proud tradition of welcoming visitors and guests to the University’s campus, to both engage in and observe robust debate. The University will take steps to ensure that this remains the case and that all speakers are given the dignity and respect they deserve.

The investigation presumably will not be limited to Loughnane, but also the students behind him banging and shouting in support as he ordered Prof. Johnson to “get the f-k off our campus”. 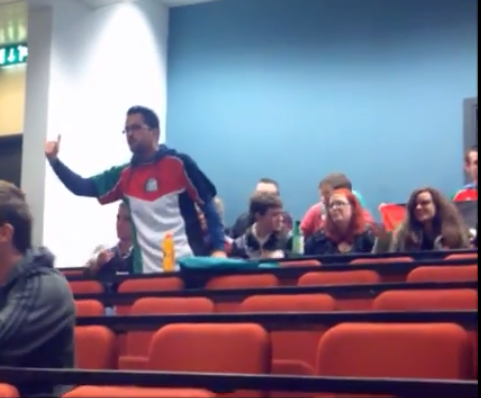 My request to Loughnane for comment has not been returned.

Loughnane is an officer of the Palestine Society at NUI Galway, and ran for a student representative position (apparently unsuccessfully) and is running for a regional student union position.  He also is a conspiracy theorist about the control by Jews of the U.S.:

Our final speaker of the night was Joseph Loughnane. He said how Israel was created as a Western outpost in a region un-brainwashed by American interests. He told us how ultimately it was the Jews that stole the land, and so they are to blame. Joseph also said how the Jews run the American media and push their agenda, and that ultimately, the West uses and controls Israel as a tool for keeping the Middle East in line.

Loughnane has a history of anti-Israel activism, as reflected in his promotional video for his NUI regional student union candidacy: 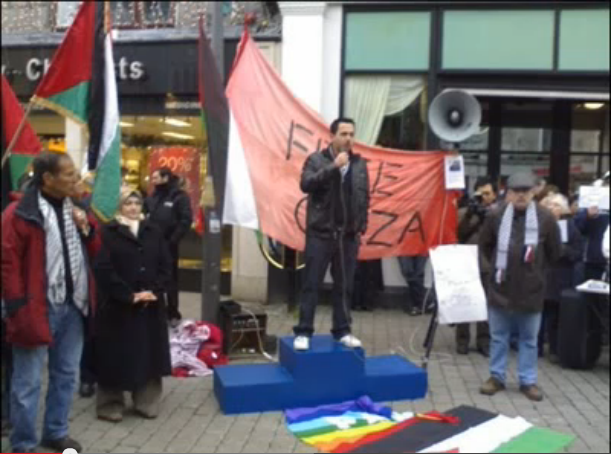 Loughnane has become something of a poster-child for the economically lost generation of Irish students in the wake of the financial collapse, via The Independent – Ireland:

Joseph Loughnane knows all too well the challenges of financing an unpaid internship.

The Galway native graduated in 2011 with a master’s in international human rights law, and also has a postgraduate law degree under his belt.

Despite applying for jobs at solicitors’ offices for six years, he has never had an offer of paid work in his field.

Unable to secure an internship in Ireland, Joseph used his savings from working in a call centre to do a six-month placement at a human rights organisation in London. He left in January but was home five months later, having run out of money. He lost two stone in weight, having struggled to feed himself on £20 a week.

“The organisation was small and couldn’t afford to pay me,” the 27-year-old says. “My friend and I were paying £500 each a month on rent and I only had money for one meal a day. Sometimes my manager brought in food to the office and I could eat for free.

“If I was paid, I’d still be in London now because I loved the job. But I’ve been on the dole for the last five months now.” 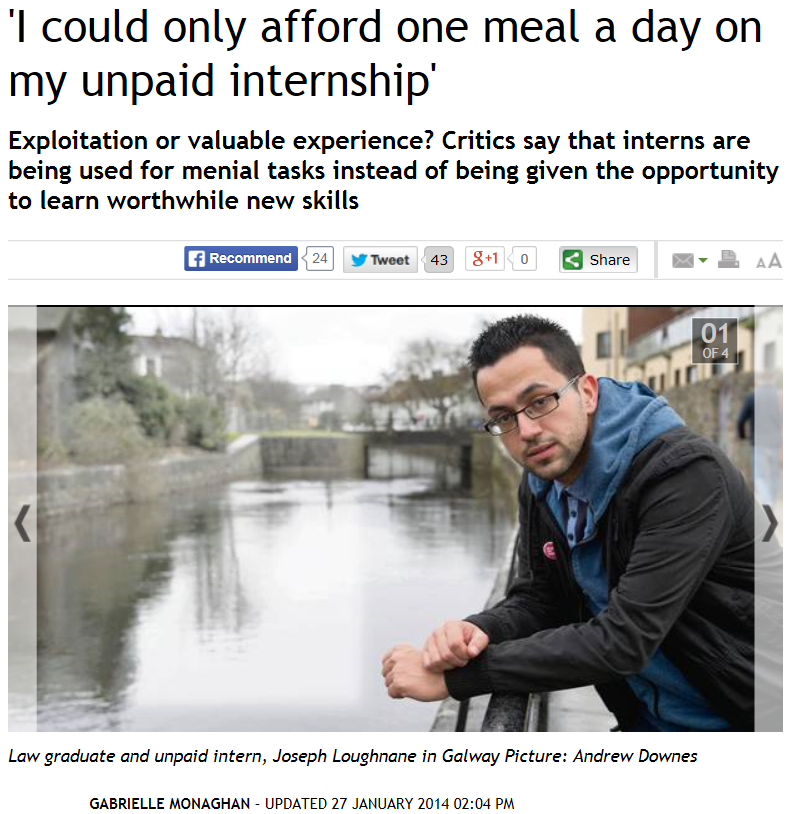 We will continue to follow this story and the investigation by NUI-Galway.

Glad to see the university is investigating this thug. One thing – you incorrectly named his as “Loughneny” throughout the article. His surname is Loughnane (you’ve spelt it correctly under photos!)

Professional students with personality disorders frequently have difficulty finding any employment. His activism is a hobby which he cannot financially support. He hasn’t figured out that feeding himself comes first.

In the spirit of St. Patrick, I’d like to see a pro-Israel supporter buy Mr. Loughnane a Guiness, some corned beef and cabbabge and some bamgers and mash next Monday.

“BUT IF YOUR ENEMY IS HUNGRY, FEED HIM, AND IF HE IS THIRSTY, GIVE HIM A DRINK; FOR IN SO DOING YOU WILL HEAP BURNING COALS ON HIS HEAD.” Do not be overcome by evil, but overcome evil with good.”
The Apostle paul

So Mr. Loughnane graduated in 2011 — why is he still allowed access on the NUI Galway campus as anything other than ‘visitor’? And why would the university allow a visitor to disrupt a university event?

Sorry, those are rhetorical questions, I already know the answers.

I work at a university, I’m all for academic freedom, but outside rabble-rousers and trouble-makers make it impossible for people on campus to exercise that freedom. The rabble-rousers have to be escorted off campus. That’s true freedom.

One of the things I truly admire about the State of Israel is that, although the idea of the state is based on a religious and ethnic heritage, its leaders had the wisdom to base their contemporary claims for rights to land on contemporary transactions.

They bought their land.

After attack, they retained some, but only some of the gains from their successful self-defense, for the purposes of self-defense.

I will never understand antisemitism. I know it exists, I just don’t understand why.

“If I was paid, I’d still be in London now because I loved the job. But I’ve been on the dole for the last five months now.”

Yep, another stupid lib who lives by his mouth, not his hands. How’s that working’ for ya, Joe?

Universities investigating the monsters they created/helped to create?

“After NUIG BDS victory – zionists single me out (i’m half-Pakistani), call me a Nazi & ignore the racist abuse I received throughiut the day” -Joseph Loughnane

“After NUIG BDS victory – zionists single me out (i’m half-Pakistani), call me a Nazi & ignore the racist abuse I received throughiut the day” -Joseph Loughnane’

This is what he said. I can tell you that this is a lie. It never happened. I was there!