Yup, Soros Is Behind J-Street

Yup, Soros Is Behind J-Street

J-Street has been accused — including by me — of being nothing more than a front group meant to undermine U.S. support for Israel by playing the “balance” card pushed by groups like the Center for American Progress (which runs Think Progress), Media Matters, and a host bloggers and pundits who subscribe to the Walt-Meirsheimer view of foreign policy.

Now it is revealed that George Soros secretly (through his children) has been funding J-Street.  As reported by The Washington Times:

The Jewish-American advocacy group J Street, which bills itself as the dovish alternative to the influential American Israel Public Affairs Committee (AIPAC) lobby, has secretly received funding from billionaire George Soros despite previous denials that it accepted funds from the Hungarian-born financier and liberal political activist.

Tax forms obtained by The Washington Times reveal that Mr. Soros and his two children, Jonathan and Andrea Soros, contributed a total $245,000 to J Street from one Manhattan address in New York during the fiscal year from July 1, 2008 to June 30, 2009.

The contributions represent a third of the group’s revenue from U.S. sources during the period. Nearly half of J Street’s revenue during the timeframe — a total of $811,697 — however, came from a single donor in Happy Valley, Hong Kong, named Consolacion Esdicul.

Jeremy Ben Ami, J Street’s executive director, said in an interview that the $245,000 was part of a $750,000 gift from the Soros family to his organization made over three years. Mr. Ben Ami also said that in this same period he had raised $11 million for J Street and its political action committee.

Update:  As reported by Ben Smith:

Perhaps the strangest thing in Eli Lake’s story on the funding of the liberal group J Street is that it got half of its money in 2008-9 from a single, obscure woman in China.

The group’s 990 forms — which I’ve also obtained and put online for the first time here — show the group’s single largest contribution, in the odd sum of $811,697 coming from one Consolacion Ediscul of Happy Valley, a Hong Kong suburb. Ediscul, whose name is Filipino, has no presence on Google or Nexis aside from this story, and people I spoke to in Jewish groups left and right had never heard of her.

According to Smith, a J-Street spokeswoman says that Ediscul is an associate of a well-known and successful gambler, but provided no other information.

A reader (see comments) located what he believes to be Ediscul’s Facebook profile.  It has had no activity since May, and has no friends or entries other than to an online cooking game: 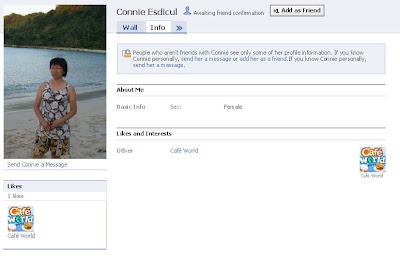 and here being photographed with Jackie Chan at a charity event in Hong Kong: 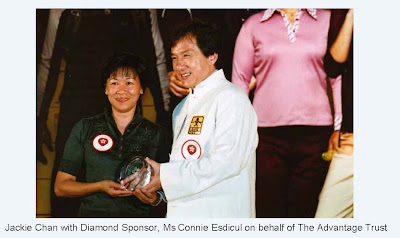 The mysterious large donor, Consolacion Esdicul, is better known as "Connie Esdicul" and even has a Facebook page. She appears to be a middle-aged woman who lives in the wealthy Happy Valley area of Hong Kong.

Ms.Esdicul has some unknown relationship with the New York hedge fund Black Rock and represented them at a charity event in HK. She presented a donation for Quality Camp to actor, Jackie Chan, from the Black Rock Advantage Fund in HK.

Black Rock has close ties to Soros ever since one of its founders, Keith Anderson, was appointed Chief Investment Officer of Soros Fund Management 2 years ago.

Interesting. If I find more – I'll be back.

Soros is an unrepentant Nazi collaborator who publicly stated that he has no guilt about his wartime work helping the Nazis identify and confiscate Jewish property.

The fact that J Street took a nickel from him tells you all you need to know about that gang of would-be Judenrat Kapos.

Go to this link and scroll down to the 4th photo of Connie Esdicul presenting Jackie Chan a check for the Quality Camp from the Advantage Trust.

There are several Black Rock closed-end funds using Advantage Trust in their titles. They have an office in and are very active in Hong Kong.

I found the same information you updated with on Advantage Trust. I stand corrected. Although there seems to be a lot of unanswered questions.

So Benter is a world renowned horse bettor…he makes money at the Happy Valley track in Hong Kong and/or other places…he gives it to J St through his buddy Connie? C'mon guys, this doesn't sound like nuclear physics to me…

I don't have a problem with Soros> He earned his money and can spend it legally in any way that he chooses. I do have a problem with liars. If the J Street people lied, then they fall into a loose grouping of people who I do not respect, would not socialize with, and not do business with in my lifetime.

Soros is openly and covertly attempting to undermine and redefine America. There are many different projects he funds. The one you need to worry about the most is the one that promoted, funded and helped elect key STATE officials in key states like Ohio, Washington, Mn and I think three other states. These officials control the elections, precincts and the rules concerning what votes count and which don't. It was a lesson they learned in 2000 and made a serious effort to position their people in key states.

Do not think your vote will count in any close election in Ohio or Mn or Washington. It won't as proven by the Franken mess.

Here is one example