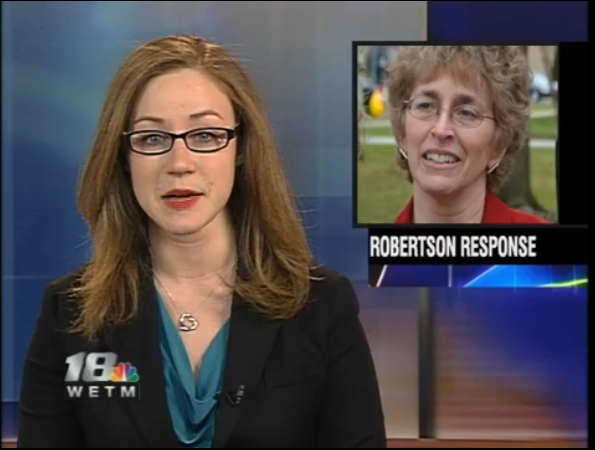 In early October, 2013, Legal Insurrection broke the story of a claim by Martha Robertson, the Emily’s List-backed Democratic challenger in NY-23, that GOP operatives were caught trying to take down her website during a crucial fundraising period last fall.

The District is a key priority for both parties, and money is pouring in from around the country. The District leans Republican, but Democrats are hopeful they can pull a rabbit out of a hat here because of the large liberal vote in the Ithaca area. It’s a Wendy Davis strategy — get out the base in the liberal areas, and hope others stay home.

Robertson never has provided any evidence of such hacking, but promised to hire a forensic computer expert to provide the proof. Then Robertson broke that promise, and said she would not be hiring an expert.

Jazz Shaw at Hot Air had a write up on Robertson’s fundraising problem,Could NY-23 Dem candiate have (gasp) lied about GOP cyberattack?

The claim of GOP hacking appears to have been false. The type of disruption her campaign described was the type of routine server issue almost every website experiences, and there is no evidence of any actual disruption.

Rather than come clean, admit the error, and offer to refund donations to people who received the false solicitation, the Robertson campaign is in shutdown mode on the issue. They have not returned my inquiries for months, and now are dodging the major local media outlets.

Instead, the Robertson campaign immediately changes the subject, as reflected in this report from WETM:

The Buffalo News was given the brush off:

Tompkins County Republican Chairman James Drader last week filed a complaint with the state Board of Elections about Robertson’s Sept. 30 fundraising email, in which she said: “Our web manager just caught GOP ops trying to shut down my website! I cannot believe it!”

So far, Robertson – who is challenging Rep. Tom Reed, R-Corning, in the Southern Tier’s 23rd district – has not offered any public proof of any such attack.

That fact prompted Drader to say she has violated the state Fair Election Code’s prohibition on “the preparation or distribution of any fraudulent, forged or falsely identified writing.” ….

While it’s impossible to know how much money Robertson raised on Sept. 30 before and after sending that email, her campaign finance report shows that she raised $31,620 in personal contributions on that day. That’s more than a third of her total for the entire quarter.

After receiving Drader’s complaint on Friday, The Buffalo News asked the Robertson campaign to publicly release the database cache that would show activity on her website last Sept. 30, but the campaign refused. In addition, Robertson campaign manager Jordanna Zeigler refused to answer a series of detailed emailed questions about the incident, instead issuing a statement attacking Reed by repeating the conclusion of a Buffalo News story of a week ago….

In a telephone conversation, Zeigler also refused to speak on the record about whether Robertson actually wrote the email, whether she approved of it before it went out and whether there was any proof that the website attack came from Republican operatives. Robertson’s fundraising email appeared on the last day of the fundraising quarter – a day when all campaigns make last-minute appeals to boost their quarterly totals.

Robertson is a relative unknown who has run away from her left-wing, Single Payer philosophy because the District leans Republican.

Rather than coming clean, Robertson is keeping the issue alive by her dismissive attitude towards local media and voters on the issue.

Perhaps the local media should investigate the likely clear evidence that Ms. Robertson has been thought to be an covert agent of Fidel, most likely acting on his behalf to establish the Northern District of the Sovereign State of Cuba.

Ok, so I made that up but still, the principal stands and shouldn’t something like that claim be made and when C. Robertson refutes it, it might be claimed than she’s hiding from the truth of the matter, so shame on her.

Long time Iowa Democrat Senator Tom Harkin recently took to the Senate floor recently to extoll the virtues of communist Cuba. The New Left takeover of the Democrat Party has turned it into a neo-communist party. That is not exaggerated hyperbole. Comparing Robertson to Fidel will raise her stature with Democrat voters.

Here’s what I mean by neo-communist. Traditionally, we think of communism as an ideology in which government confiscates all the private property from civil society. The government party elites control the means of production and decide how to allocate the economic resources. Democrats don’t confiscate all of the private property, so they are not strict communists. They nominally leave ownership in the hands of citizens. But they use government force to control nearly every aspect of how the property is used through laws, regulations and rules. That’s how we end up “private” health insurers whose operations are complete dictated by government. That’s the purpose of writing 2500 page healthcare laws with several tens of thousands of pages of regulation. Exact same dynamic with banking and finance with the Dodd-Frank law. They tried it with energy, and the neo-communists in the House actually passed it, but the neo-communists in the Senate got cold feet for some strange reason.

Today, there’s not much functional difference between Democrats and Communists. And the result will be the same, too. Disincentives to innovate and for entrepreneurs to start new businesses. High structural unemployment. Stagnation. And all that will make government even more powerful. Government will be in the business of distributing the pie since the pie will not be growing much, which will make special interest lobbyists even more powerful as they have to fight for protections and larges slices of the pie from government elites.

Democrats are neo-communists. They’re awful, hideous people to anybody who wants the greater prosperity that comes from more economic liberty.

Guffaw! Excellent.
I think that description also works for CaliforiaCommunists Feinstein, Boxer, Liu and Chu…just to name a few.

Pile it on professor! If they aren’t coming clean then perhaps a little more legal persuasion is in order?

Freedom of Information Act requests on Campaign response and inquiries as to the Cyber security firm and where funding for it went?

Class Action against the campaign for not returning donations which were solicited under false pretense?

Gotta be something someone who has standing can do, right?

The best thing which has happened in the 23rd District is having Prof. Jacobson have this become is home legislative district and putting sunlight on the agenda of the left socialist progressive politics in Tompkins County. With Cornell leaching out over the 15 surrounding counties of the 23rd district, it is a up hill battle to hold anyone accountable…until now. So Thank you Prof.