Martha Robertson promised to hire a computer forensic firm to justify her fundraising claim that GOP operatives hacked her website. 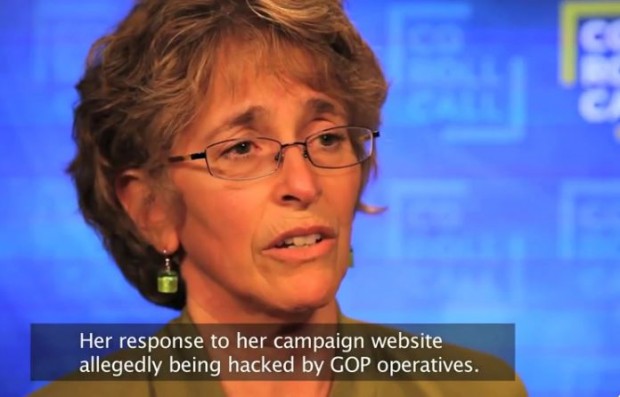 Martha Robertson is the Democratic candidate in my home district NY-23, which includes Ithaca. This is not the liberal district it was prior to the 2010 redistricting, when the prior snake-shaped district was designed to keep Maurice Hinchey in office. The district leans Republican by several percentage points now, and includes a huge rural land area heading west in the Southern Tier.

Robertson has a very tough, but not impossible, road to a win against Republican Tom Reed.  Both parties have made the district a priority, and Reed leads in fundraising.

An analysis by Stuart Rothenberg highlighted that Robertson may be too liberal for the district:

As my colleagues and I started to go over Robertson’s bio in the meeting, we noticed a gap right after college, so we asked about it. She responded that she went to California, “just like everyone else did.” It was an instructive comment.

We discussed her background, accomplishments and issues. When I asked the county legislator about fracking and energy (given the district’s proximity to Pennsylvania, where an energy boom is under way), she looked at me and said natural gas was “not her favorite fuel.”

The smile on her face suggested that she understood how odd that sounded. Though I had not been aware that people had favorite fuels, I asked what her favorite fuel was. “Conservation,” she replied, quickly adding “renewable energy,” as well.

I hadn’t realized it at the time, but Robertson, who admitted to me that she has voted to raise taxes every year she has been in the county legislature, has been a leader in the fight against fossil fuels.

That too liberal posture is evidenced by Robertson’s pro-single payer past, which also is a problem.

There’s another issue, though, that Robertson has been dodging, her fundraising solicitation that “GOP Ops” were caught trying to take down her website during a key fundraising period.

Robertson never came forward with proof, and brushed off inquiries from the local and national media by claiming that she was hiring a forensic firm to investigate.

Since that late October promise, I have emailed her campaign twice seeking an update on the forensic investigation, but have been met with silence.

Was a forensic firm hired by the Robertson campaign? And if so, what were the findings?

Those questions should be pretty easy to answer.

Robertson doesn’t owe me answers, but she does owe the voters answers as to whether her campaign was truthful when it solicited donations based on the representation that GOP operatives were caught trying to take down her website.

I see a few books to be written maybe…..such as….

“Lies and the Democrat Pols that Tell Them????”

Or…”They Spat on My Website and That’s Racist!”
she screached holding an oversized 4 1/2 foot gable.

The Democrats keep getting hacked. I remember Carlos Danger and how he was hacked.

What’s a Democrat without a lie?

People are always trying to hack everything, I doubt she has proof the republicans are the ones attacking her.

Could be Oberlin Syndrome, where the “victim” is actually the perp.

I could’ve added, “And with rabbit’s teeth protruding from a wrinkled mouth” but I won’t. That would be grossly impolite.

I bet she gets an ‘ugly sweater’ for Christmas.

The woman herself is low-information. She believes the nonsense she spouts. She reminds me of women who are so computer illiterate that when their computers get infected with a virus because of their own incompetence they describe it has having been “hacked”.

Look at her bio. She watered plants and attended the cash register in her family’s nursery business. She majored in Early Childhood Education in college and was an elementary school teacher for a few years before relocating to Cleveland for 11 years and back to upstate NY for her husband’s job. While being supported and raising kids, she dabbled in charity work and local politics. Nothing qualifies her in the first place to be in Congress voting on serious federal issues — and the GOP website claim only highlights that.

Another case of a member of an aggrieved class, when faced with impending failure, cloaks herself as a victim in quest of?…sympathy, or maybe the sympathy vote?

She may be a dullard, but her constituents have a right to vote for the person they identify with.