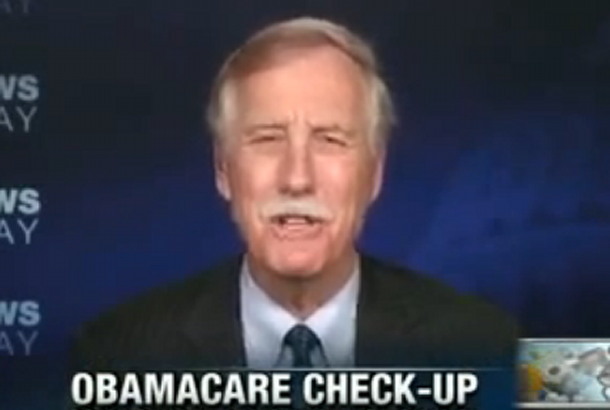 Maine senator Angus King is an independent who caucuses with Democrats. On FOX News Sunday while being questioned by Chris Wallace, King made an interesting statement.

“Two points if I may, sir,” says Fox host Chris Wallace. “One, then why is Harry Reid saying he’s not going to allow a vote on the fixes? And, two, speak directly and briefly, becase we’re about to run out of time, to Senator Barrasso’s comment that a lot of doctors, a lot of hospitals are being excluded by what Obamacare is offering.”

The senator may have a point about there being no such thing as Obamacare. A healthcare expert who writes for the Philadelphia Inquirer noted yesterday…

Numbers of uninsured are not being decreased

On Thursday, the Obama administration announced that enrollment had reached six million. Using McKinsey’s findings of 14 percent gaining new coverage, only 900,000 previously uninsured individuals will have acquired insurance as a result of the exchanges.

So, there remain nearly 35 million uninsured citizens. No additional enrollment in Obamacare for 2014 was scheduled after March 31, though the administration extended the deadline last week.

Of course there’s one group who knows Obamacare really exists. The millions of people who have lost their healthcare plans under the law.

Here in Maine, Angus King is known for his wondrous straddles.

yup.
republicans still taking blame for crap he and others pushed.
etna here.

Nice try. Glomming onto the regime’s narrative and blaming insurance companies, I see, like a real “independent.”

Now, now that’s a big — There is no such thing as Obamacare. You can’t sign up for Obamacare.

There is such a thing as Obamacare.

But it’s not an insurance policy – and I never heard anybody say it was.

Well, despite his being a lying SOS, he inadvertently has a point.

Really, how do you FIND any ACA any longer?

All you have is a series of capricious Obamabanana Republic edicts. There is no “law” any longer.

If you wanted to obey the act, you’d find that impossible.

Clearly there is a two-pronged approach by supports to spin the current situation. A vocabulary lesson about what to call it and who to blame for problems, and to create the illusion through fabricated numbers how great everything is. Expect 7 million plus to be reported here shortly, for example.

But unless something changes, I don’t see how the spin will work. How many of the tens of millions you have been or at least feel screwed by the changes will buy this? Especially anyone who was forced to shop because of losing their policy or anyone who has seen a significant premium increase.

Is this the Dems new election year dance ? Can’t be held accountable for Obamacare because there is now Obamacare outside your imagination. Kinda like ‘what Mafia, there win ‘t no such thing as the Mafia’

Excuse the typos should be ‘no such thing’ and ‘ain’t’

We will also excuse the use of apostrophes in place of quotation marks when the apostrophe use is not a quotation substitute inside another quotation.

Another attempt to find just the right turn of a phrase, the right “personal experience,” the right vilification of the insurance companies, or the right clowning of the opposition, that will absolve the Democrats of responsibility for this monstrosity. Rarely have they encountered a situation where every attempt at disinformation so quickly gets exposed by the unalterable truth. This just isn’t suppose to happen to Democrats.

What is the practical purpose of a politician calling one’s self an “Independent,” if he or she consistently caucuses with Democrats? That’s not demonstrable “independence,” in the most plain sense of the word, so, why doesn’t King just drop the charade already and dispense with the pretense? If he actually had sided with the GOP on some issues, then, his self-ascribed political allegiance might have some validity to it.

He wanted to get elected. “Independent” was the best shot.

So, then, Angus, if “ObamaCare” doesn’t exist, it couldn’t possibly hurt to repeal it, right?

No there is a bunch of private insurance companies that have to offer insurance based on the requirements set forth by Obamacare.

How can the three new englanders call themselves independent when they all caucus with the democrats?