Millions who lose their health plans and are enticed or forced onto Medicaid will find out they also have lost quality health care. 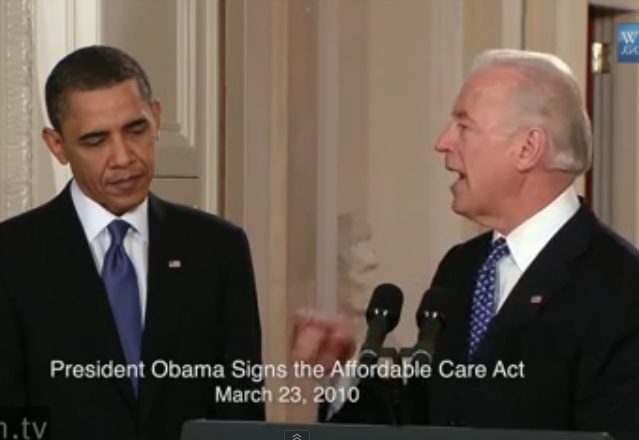 It may be the biggest Obamacare lie of all.

Not that you can keep your health care plan if you like your plan.

Not all of the phony cost estimates and supposed efficiencies.

The biggest lie of all is that 15-30 million additional people who will be enticed or shoved onto Medicaid will receive quality health care.

In reality, they will receive health care “insurance,” but there will be few doctors willing to see them because the reimbursement rates are so low.

I have mentioned before how, anecdotally, almost every doctor with whom I speak sings that same song, that Medicaid reimbursements are so low they either have to restrict or eliminate Medicaid patients.

It’s not just anecdotal.  Even The New York Times notes that the problem will become much worse under Obamacare, Medicaid Growth Could Aggravate Doctor Shortage (h/t @Drudge_Report):

Dr. Ted Mazer is one of the few ear, nose and throat specialists in this region who treat low-income people on Medicaid, so many of his patients travel long distances to see him.

But now, as California’s Medicaid program is preparing for a major expansion under President Obama’s health care law, Dr. Mazer says he cannot accept additional patients under the government insurance program for a simple reason: It does not pay enough.

“It’s a bad situation that is likely to be made worse,” he said.

His view is shared by many doctors around the country. Medicaid for years has struggled with a shortage of doctors willing to accept its low reimbursement rates and red tape, forcing many patients to wait for care, particularly from specialists like Dr. Mazer.

Yet in just five weeks, millions of additional Americans will be covered by the program, many of them older people with an array of health problems. The Congressional Budget Office predicts that nine million people will gain coverage through Medicaid next year alone.

As furious as people who have lost their private insurance are now, just wait until those “qualifying” for Medicaid they find out that the seeming freebie means they lost their plan, their doctor, and their health care.

The result of all this will be a targeting of doctors.  Forcing doctors to accept Medicaid patients will be the inevitable solution.

Wouldn’t there be a constitutional problem attempting to force physicians to work for less compensation than they are willing to accept for their personal services?

Who the heck is John Galt, anyway?

As a doctor I’d like to think that the answer to your question would be “heck yes”.

But the progressives who will demand that I and my colleagues see Medicaid patients and accept whatever payment that program deigns to give us have a potent weapon to coerce us:

I can’t practice without one. A legislature in an indigo (dark blue) state with a large Medicaid burden could simply pass a law requiring me, on pain of my license renewal, to accept x number or proportion of Medicaid patients in my practice. As far as the legislature is concerned, the problem is now solved. If as a result I can’t make ends meet in my practice, that’s my problem.

Good luck if I object: some doctors might be able to move from the first state or two that does this, but many of us have families, homes, etc that don’t move very easily. And should this idea move across the country to encompass a fair number of states, to where do you move?

It’s a progressive dream: create a shortage, then regulate it.

Just how obvious if the failure of Obamacare? Former Obamacare supporter Mike Tyson, who certainly isn’t known for his policy chops, noted this to Piers Morgan.

“The reality of this plan: It didn’t work. So we have to find another plan,”

This has always been known by those of us in the healthcare field. Physicians have been refusing new Medicaid AND Medicare patients for the past couple of decades. If the government thinks they can “force” them to do otherwise, it will end up in the courts…making people give their “labor” without just recompense is slavery.

Medicaid is a substandard level of care, simply because the reality is that the government cannot and DOES pay, nor intend to pay for costly diagnostic tests, treatments, or specialists care. Medicare is going to be treated more and more like that, though those recipients might have a louder voice of rebellion.

In general, our healthcare system worked reasonably well for the majority of people. Obamacare deliberately destroys it and makes people dependent and desperate for government “services.” Which will be non-existent. It isn’t that Obamacare has “death panels” in it, Obamacare is death panels.

Whoops, make that “government Does Not pay,”

LP, see my note above. Right now we docs can refuse to take Medicaid/Medicare (full disclosure: the university hospital where I practice does take both, the former with a lot of restrictions). We could try what you suggest and simply bail out of the insurance model altogether, but if the state simply conditions our license renewal on accepting these programs, we are SoL.

Healthcare in this country would be so much better if it were left to the individuals who actually practice Medicine.

I like the idea that the state would cover malpractice insurance if doctors would voluteer a few hours a week for charity. I would like tort reform even better but I don’t think that will get passed while beauracrats and lawyers have anything to say about it.

I’m 56 and was looking forward to retirement. If retirement means relying on Medicare I think I will just keep working, if there are still any jobs left in this country.

In the past, when medicaid in Massachusetts was used as a secondary insurer, the plan would pay the provider up to what medicaid’s “normal” payment would be. Thus, when the medicare 80% was paid, an amount that routinely exceeds medicaid primary payment, the provider would be paid zero dollars for the remaining 20% by medicaid.The year’s first medicare bills, that are mostly considered the patient’s deductable portion, would paid at the medicaid standard as opposed to the medicare reimbursement. Of course, all providers are required to sign agreements not to balance bill the patient for any difference between what is paid, even “zero dollars” and the original bill. Yes zero dollars is considered a payment in medicaid land. It is no surprise that any provider has problems from these regulations

Two of Obama’s advisors were enamored with former Communist Party Chairman Mao tse Tung, and particulalrly with the Mao quote “All power emanates from the barrel of a gun”
That’s the likely venue the government will use to persuade the providers to supply the necessary care.

The biggest lie of all is that 15-30 million additional people who will be enticed or shoved onto Medicaid will receive quality health care.

In reality, they will receive health care “insurance,” but there will be few doctors willing to see them because the reimbursement rates are so low.

This is so blindingly obvious that only a) ideologues or b) people who don’t have two brain cells to rub together could fail to see this coming down the pike.

Add (c) people who are actively pursuing the economic and social collapse of the USA for revolutionary transformation.

Simply put: Cloward and Piven were radical Columbia professors in the 1960s who believed in “change” and “social justice.” Inspired by the riots in Los Angeles in 1965, they wrote and published their article which outlined the best way to bring the kind of Saul Alinsky-type social change to America. In their estimation, it was to overwhelm the system and bring about the fall of capitalism by overloading the government bureaucracy with impossible demands and bring on economic collapse.

There a lot about Cloward and Piven on the internet. I pulled the above paragraph from http://www.foxnews.com/story/2010/01/05/cloward-piven-and-fundamental-transformation-america/

A twist on Medicaid that I just discovered, and have yet to see get any focus, is The Medicaid Estate Recovery Act.

Briefly stated, every state is required by Federal Law to attempt to recover medicaid dollars expended from the “estate” of medicaid recipients. That is, the State is a debtor due payment before the heirs receive anything.

That might now sound bad, given majority of medicaid recipients won’t really have assets, however! Some one medicaid actually own homes.

With ACA, some one officially “in poverty” (MAGI based) will not be permitted to buy private insurance through the Exchanges – they’ll be enrolled in medicaid. Outside the Exchange, they won’t get subsidies. Now, many of these poor people USED to buy lower-cost private insurance plans, but that option no longer exists. They’ll either enroll in medicaid, or join the uninsured/pay the “Shared Responsibility Payment” (aka the Tax).

So much destruction in so little time.

Obamacare has the appearance of a quick fix. Increased total cost and progressive subsidies cannot be considered reform. These are evidence that the economies, locally, regionally, and perhaps nationally, are either stagnant or recessive. I don’t think that Detroit is an isolated case. Obama knows that highly financed and subsidized Democrat-controlled districts are especially vulnerable. They are desperate for either an Obamacare or a single-payer solution to delay accountability.

Once Obamacare kicks in, you’ll only see an MD if you have innards hanging out or a Democrat Voter Registration card on a chain around your neck.