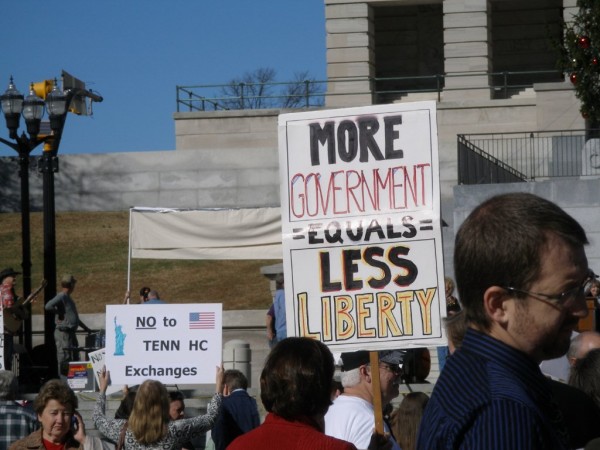 We have addressed many times recently the misleading claim that support for the Tea Party Movement was at historic lows or reflected the near-end of the movement:

The ABC News – Washington Post poll released just after midnight has generated headlines for the sharp decline in Obama’s favorability ratings by just about every measure, and the growing unpopularity of Obamacare.

But there is a hidden gem in the poll that is not receiving much attention.

Support for the Tea Party movement is at 38% for all registered voters, not far below the 41% approval rating and 46% favorability rating for Obama.

It’s clear that support for Tea Party political views exceeds support for the movement, likely the result of years of demonization, culiminating in the recent Democratic Party eliminationist rhetoric directed at the Tea Party.

In the serious of screen shots below, you can see some interesting details, including that Tea Party support comes from the more educated, and even has substantial support among non-whites, although lower than among whites. 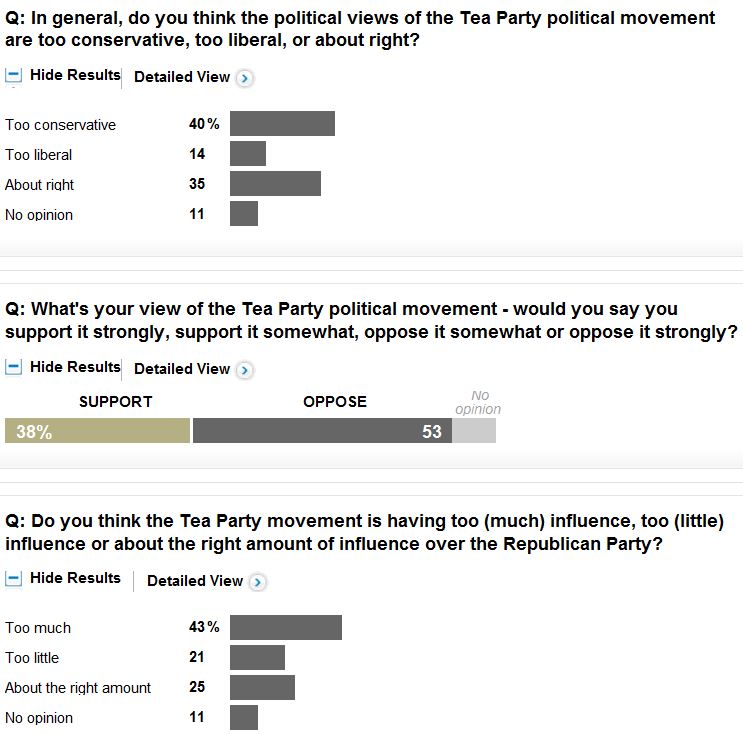 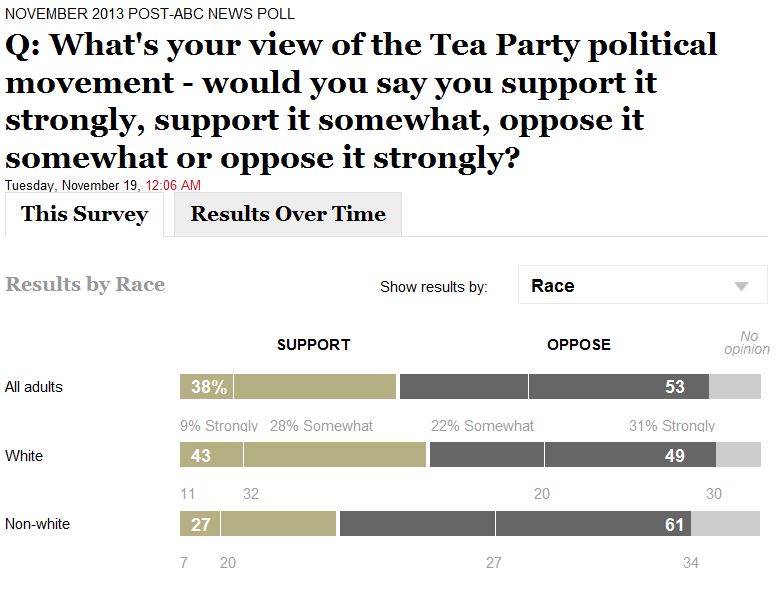 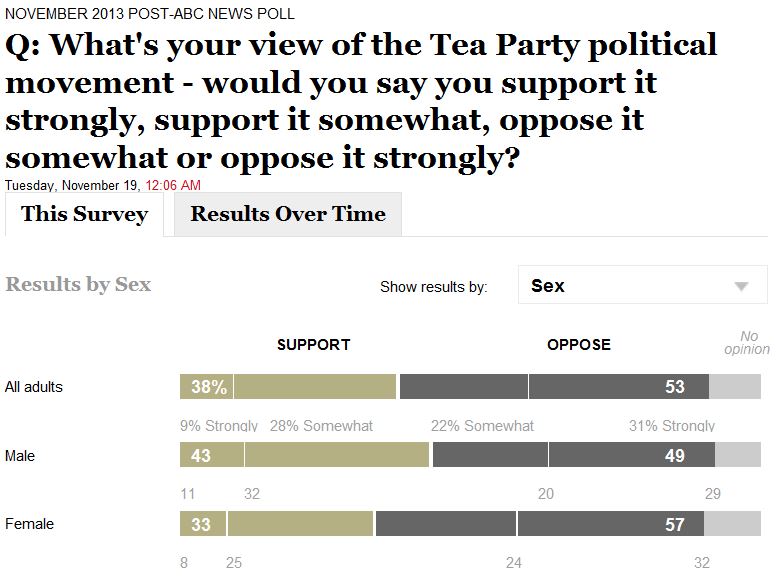 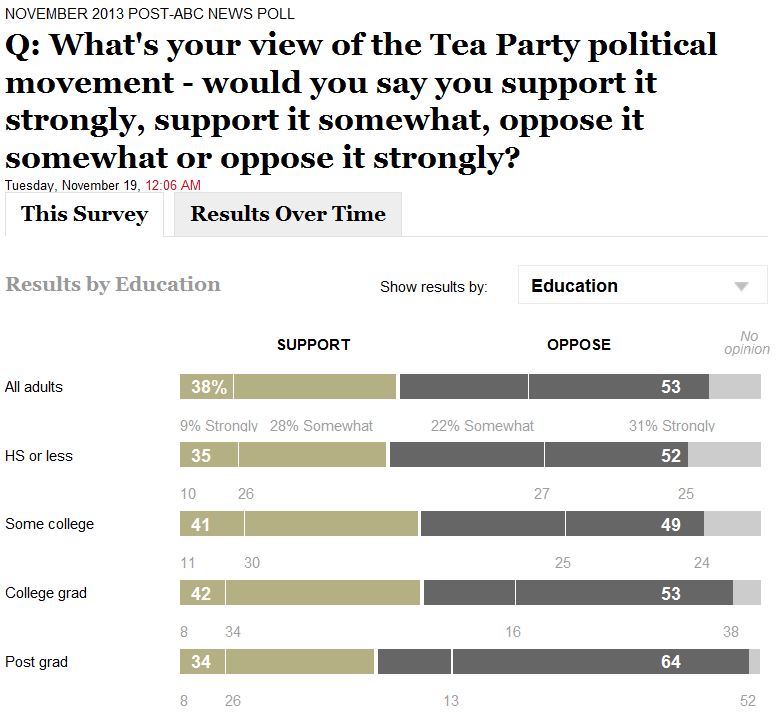 And that’s without little girls being polled.

Speaking of little girls. Thanks to our local Tea Party presentations regarding Common Core, here in California, I have spoken to my granddaughters over the last 6 months about the data mining efforts to which they would be subjected sometime this year. They have a good understanding of the privacy issues and of their right, at least for now, to opt out. Last week freshman-granddaughter’s science teacher told her class that they would have a “test” this week. From the teacher’s description of the “test” it was no test at all, but rather it was a 100 question data mining operation about the kids and their families, including “Have you ever smoked marijuana?”, and “Does anyone in your family own a gun?” Granddaughter and about half of her classmates opted out of the “test”, which was given yesterday. The “answer sheet” was designed, of course, to be fed into a computer.

Seems pretty standard that kids get an intrusive inquiry about then. It was a “confidential journal” for me. We had to turn it in “just to see if we were making entries”, but the teacher kept them all and did not encourage us to continue.

Granddaughter is a high school freshman.

The Tea Party is a concept that agrees with 68% that want smaller government, lower taxes.

The 30% discrepancy between that and tea party favorability in polling is the result of ignorance and a broad based campaign of hate and misinformation.

Don’t know which Tea Party is this poll referring to.

The big-tent grassroots version which sprung in 2009 with a clear, focused platform on taxation, the national debt and Obamacare.

Or the confusing spin-offs that’s caked with political opportunists, celebrities and social issues. The one that’s preoccupied with promoting allegiance to the TP Brand Institution than the original ideas which gave it form.

Agreed. People were 60%+ favorable when the Tea Party demonstrations were ongoing and focused narrowly on debt, spending, bailouts, and Obama-Care.

The constant attacks from Democrats have had some effect, but it is a huge mistake to discount the effect of those who pretend to have some “Tea Party” authority to make pronouncements, state positions, comment on TV, or endorse candidates.

There was never any vote, plebisite, or consensus to grant ANY of these people (Freedom Works, Tea Party Express, Tea Party Patriots, Tea Party America, etc) that authority. They speak for themselves alone and spend the money they raise on what they alone decide.

The actual Tea Party movement was grassroots and broad based, including significant numbers of independents and Democrats. The self-interested usurpers have harmed the “brand.”

Good point. I am especially worried about the large number of tea party groups that have been taken over by radical socons and anti imigration people, who have marginalized many of the libertarian cnservatives who started the movement. When the original tea party was concentrated on fiscal conservatism and limited/honest government it thrived. The old tea party had broad appeal to indepedents, and even some fiscally conservative dems, but the new ones are nothing more than extreme regular conservatives.

Which mentally ill group of miscreants think the tea party is too liberal?

One possibility might be radical socons and neocons, who think the tea party is too libertarian on social issues and the war on terror.

[…] One of my fav blogs, Legal Insurrecton/ William A. Jacobson reports on a recent poll, looking specifically at the often denounced, presumed dead Tea Party. […]

If an ABC/WaPo poll has the Tea Party with numbers this high, the actual numbers must be in the stratosphere.

The left will have to ramp up their manipulation of the idiots infested in the leadership of the GOP. In other words, why should they do any hard work, when they have useful idiots doing their bidding in attacking the conservative base of the GOP?

The GOP is dead. Tt’s institutional corruption has destroyed any hope of rescue: just take a look at Karl Rove’s face.

The Tea Party is the future.

Tea Party “A movement, based on principle, rather than allegiance”…

I was for the Tea Party before it was cool!

The tea party was falsely blamed for the gov shutdown, when the real cause was the absurd Reid/Obama no negociaions with terorists position, after the house had already compromised on the 1 yr delay CR, and indicated they would give even more. But Reid/Obama were backed up completely by the lying MSM, and even many rhino traitors, like Rove. I am suspicious about any repub spokesman who does not push back against this false narrative when they hear it from an MSM interviewer. The minimum they should insist on is that the MSM interviewer admit that Reid/Obama are equally at fault as the tea party.

[…] “But there is a hidden gem in the poll that is not receiving much attention. Support for the Tea Party movement is at 38% for all registered voters, not far below the 41% approval rating and 46% favorability rating for Obama. Moreover, 46% think the Tea Party has too little/just about right influence versus 43% who think it has too much influence.  49% think the Tea Party political views are about right or too liberal, versus only 40% who think too conservative.” Hidden gem in ABC/WaPo Poll: Strong Tea Party support […]

[…] was sold and would cause Democrats to scramble for distance; that the Tea Party would be viewed as more in touch with American values than the ideology behind Obamacare; that big government would become the most hated thing outside […]