We’re here, we’re Tea Party, get used to it!

We’re here, we’re Tea Party, get used to it! 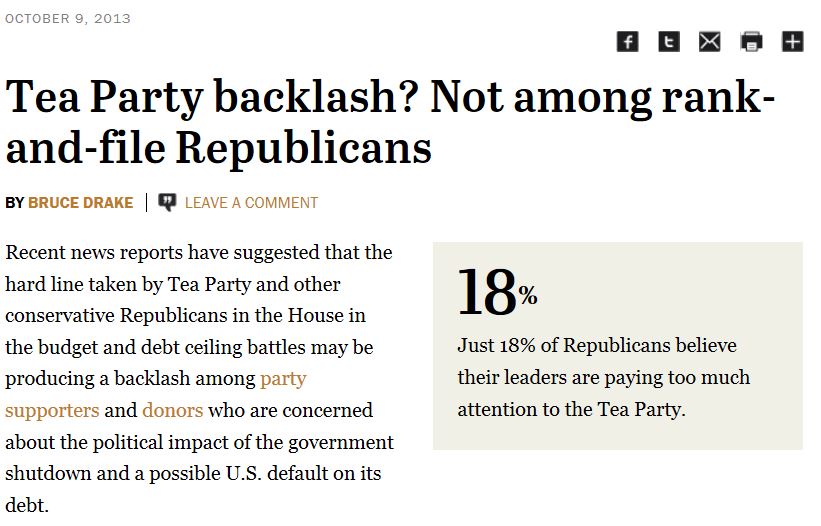 The demise of the Tea Party movement has been predicted since its inception in early 2009.  There has been a non-stop demonization of the movement led by Democrats and the media, but frequently joined by party Republicans.

There also have been many misleading headlines based on cherry-picked polling, as I demonstrated recently, Congrats @Gallup for inspiring these 5 misleading anti-Tea Party headlines.

As to the debt ceiling and budget showdown, you can find what you want in the polling to argue either side.

Here’s a headline, based on the data in the AP-GfK poll, you probably will not see:

Yeah, you heard that right.  60% of those surveyed wanted smaller government, fewer services if the only other choice were bigger government, more services.  That core value, which transcends party lines, is the Tea Pary core value (not even the Republican core value).

Here’s another headline, based on the data in the AP-GfK poll, you probably will not see:

Most Americans agree with Tea Party on debt ceiling increase

You read that right.  41% of those surveyed said the debt ceiling should be raised only if conditioned on significant budget cuts plus another 10% who said it should not be raised for any reason. 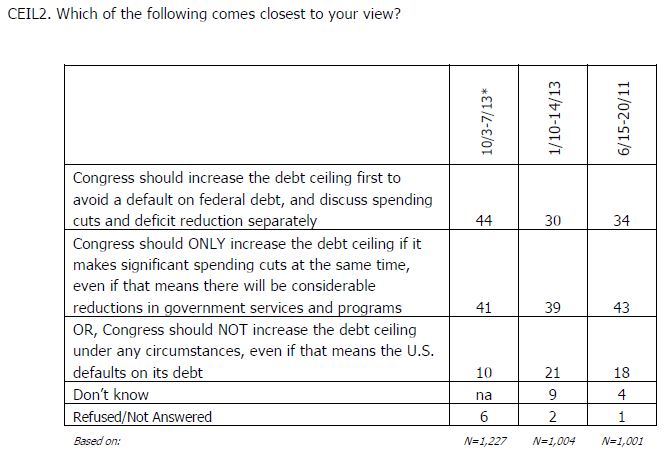 The polling is much tighter than in 1995, when public opinion shift dramatically against Republicans (although it swung back by the next election). From the Pew Survey:

Polling in the early days of the 1995 government shutdown was much more lopsided: For example, a Nov. 1995 Gallup/CNN/USA TODAY survey found more blaming Republicans in Congress than Bill Clinton by a 22-point margin (47% vs. 25%).

Those Republicans are out of touch with Republicans, as a Pew Survey analysis released today shows.

Stop with the taunts, the threats, and the name-calling.

You have shown arrogance and been dismissive, even derisive, toward the Tea Party movement.

Update:  Thanks to Ragspierre in the comments for the link to this WaPo Monkey Cage Blog post, The conservative shift in public opinion has happened in all 50 states

This is a guest post by Cornell political scientist Peter Enns.

Recently on this blog, Larry Bartels drew attention to an astonishing fact: the public is as conservative as it has been in 50 years. To highlight this point, Professor Bartels presented the public’s policy mood — James Stimson’s measure of public support for government programs—from 1950 to 2012. In a recent article, Julianna Koch and I generated measures of policy mood for each state from the 1950s to 2010 (our measures our here). What we found is that the conservative opinion shift Professor Bartels highlighted repeats itself in every state.

This conservative shift is one reasons Republicans did so well at the state level, but get clobbered nationally. The Obama cult doesn’t work its way into local politics to the extent it does for federal races, and the national media doesn’t care as much about state races so it doesn’t swarm to take down state Republican candidates the way it swarms after Republicans for federal office.

Like I keep saying, the Tea Party is not a political party, nor is it the conglomerate of orgs with ‘Tea Party’ in their names, which, like most political orgs, tend to drift from their initial missions. The Tea Party is an idea, or rather, a collection of ideas, now hopefully familiar to all: Small government, lower taxes, government accountability, and adherence to the US Constitution (various individual TP orgs may add assorted social issues to this).

You could some up the Tea Party governmental reform agenda simply as Back To Basics.

Sumtimes I spell sum as some and vice versa just to be creative. *sigh*

“Small government, lower taxes, government accountability, and adherence to the US Constitution…”

It would be an interesting poll question to ask…. Are you in favor of larger government, higher taxes, no government accountability and ignoring the constitution?

If asked that way it might surprise even Ezra Klein how many “Teabaggers” there are out there in flyover country.

I think we are starting to see the public wake up to the notion that contrary to what the MSM says there hasn’t been that much of a difference between the two parties until this point.

And after the spectacle of government-by-malice we’ve seen, that trend could get stronger.

You think they let most of their editorial and opinion writers walk around free…???

Think of the floors, and the risk of slip and fall accidents…

LOL Thanks for the laughs!

Oh and for these “blame” narratives the polling misses a critical point.

The State Media blames Republicans relentlessly which determines how a large % of the LIVs react.

I’d like to see a cross tab that looks at informed voters and how they assess blame – say a simple question of who the 2 congressional leaders for each party are.

Of course if one sticks to the facts, Harry Reid has shutdown the government as the House has passed spending bills and the Senate has not taken them up.

Correct. The media is driving the rhetoric.

The polling options matter, too. I seem to remember a poll asking who’s to blame for the shutdown. The possible answers were the House Republicans, the President, both, or neither. The majority chose the House GOP.

Logically speaking, given those options, I might pick the House GOP, too, but only because the Senate Democrats and/or Harry Reid weren’t listed as an option. The President really isn’t a viable option because we’re talking about passing legislation; the ball is not in his court. Sure, he’s fed the alarmist rhetoric and said he plans to veto, but that’s his only contribution to the issue, and at this point it’s meaningless.

Nope, this should be falling squarely on the Senate Dems and Harry Reid (with a dash to the President for feeding the trolls), but because of the MSM controlling (manipulating?) the message, people – especially LIVs – still blame the GOP and Tea Party.

You mean: “They Cooked the Books!”

A friend who determined the use of tea-bagger was acceptable couldn’t understand why I responed in kind in describing dummycrats. In their little minds is the idea we’re here to take thier abuse. Any demonstration that does not support that idea is seen as treasonous. These are the people who claim to be liberal and progressive.

Side note: remember those lefties who would show up at Tea Party rallies and start making racist remarks? Well that’s the new online past time for the occupy losers; creating fictional characters that they may use to project their own hate of what their ideal enemy is. It seems the only way they can get a quote of a Tea Partier doing anything remotely racist is if they portray one. Sort of like the phantom racism on college campuses that always turns out to be a hoax.

This stuff is their new career path.

That’s a very, very common logical fallacy, known as a “Strawman.” They can’t beat their real political opponents, so they set up a caricature that’s easy to knock down.

Browse through the fallacies at the link. You’re a better debater if you’re not making any of those easy mistakes. 🙂

Damn right. I have them memorized.