Among the nicest things the Democratic smear machine called Sarah Palin was “Caribou Barbie.” Just about everything else they called her was much worse.

The term “Caribou Barbie” started within days of Palin’s nomination for Veep in August 2008.  By September 2, 2008, the term was spreading throughout the left-blogosphere, as Michelle Malkin noted at the time.

The term so took hold that it even was the subject of an SNL skit in October 2008, with Palin delivering the punch line in an attempt to make light of the term.

It later was used by NY Times columnist Maureen Dowd:

“Caribou Barbie is one nutty puppy.”

The treatment of Palin was sexist — including liberal women who mocked Trig Palin and thought it the worst thing in the world that Palin had the audacity to bring him on stage with her — but not just because of the term “Caribou Barbie.”  That term was the least of it.

The “Caribou Barbie” name was part of the myriad of accompanying photoshops and sexualizations of her, using any excuse to make sex jokes.  Palin wasn’t just turned into any Barbie, but a sexy librarian and bikini model not just in the blogosphere, but from stars such as Stephen Colbert.

With Palin it wasn’t just the use of the term “Barbie,” it was the full package of sexualized attacks, including from mainstream publications.

Here’s what a Google Image search turns up for “Caribou Barbie” for August-October 2008, just prior to the election:

Wendy Davis, who has all but announced she’s running for Governor of Texas, staged a futile and meaningless “filibuster” to preserve a woman’s right to abort unborn children after the 20th week without medical necessity, a position to which very few people adhere.

Late-term abortion is unpopular because here’s what a 20-week old unborn child looks like (text and image via WebMD):

(Development at 20 Weeks — The baby weighs about 10 ounces and is a little more than 6 inches long. Your uterus should be at the level of your belly button. The baby can suck a thumb, yawn, stretch, and make faces. Soon — if you haven’t already — you’ll feel your baby move, which is called “quickening.”)

That filibuster to preserve the right to abort an unborn child over 20 weeks without medical necessity earned Wendy Davis national fame.

She was an unknown prior to that.  Now Davis is a Democratic rock star.  Money will flood into her campaign from around the nation.

On August 5, 2013, in the midst of her pro-late term abortion fame-tour, Davis admitted to being completely ignorant of the Kermit Gosnell shop of abortion horrors that was sweeping the news media, as reported by John McCormack of The Weekly Standard:

Davis has become a champion for pro-choice activists, but during her recent whirlwind national media tour, she never commented on late-term abortion doctor Kermit Gosnell, who was convicted of murder in May for killing infants moments after they were born.

Following her Press Club speech on Monday, THE WEEKLY STANDARD asked Davis to explain the difference between the late-term abortions that the Texas state senator wants to keep legal and the illegal Gosnell killings.

Davis didn’t answer the question. “I don’t know what happened in the Gosnell case,” she told me.

The next day Erick Erickson dubbed Davis “Abortion Barbie” because of her ignorance of the Gosnell case: 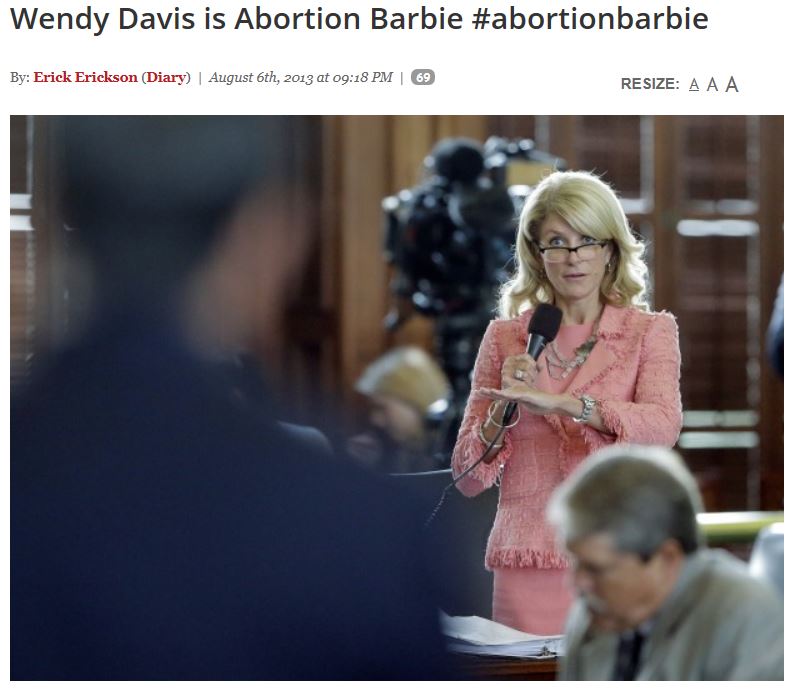 The left is in a tizzy on twitter for my referring to pink shoes wearing Texas State Senator Wendy Davis as “Abortion Barbie.”

It sums her up perfectly.  All the nation knows about Wendy Davis is that she is ignorant of the horrors of Kermit Gosnell, wears pink shoes, and filibustered legislation to save the innocent in Texas.  She joined the long line of Democrats before her to oppose legislation to protect other people while using property rights arguments to do so.

The media would prefer to focus on her blonde hair, her great outfits, and her pink shoes than on the procedure she wants to protect.  That procedure, late term abortion, is opposed by a majority of women and men.

Indeed, it was liberal women who obsessed over Davis’ clothing style, not conservative men (via Twitchy): 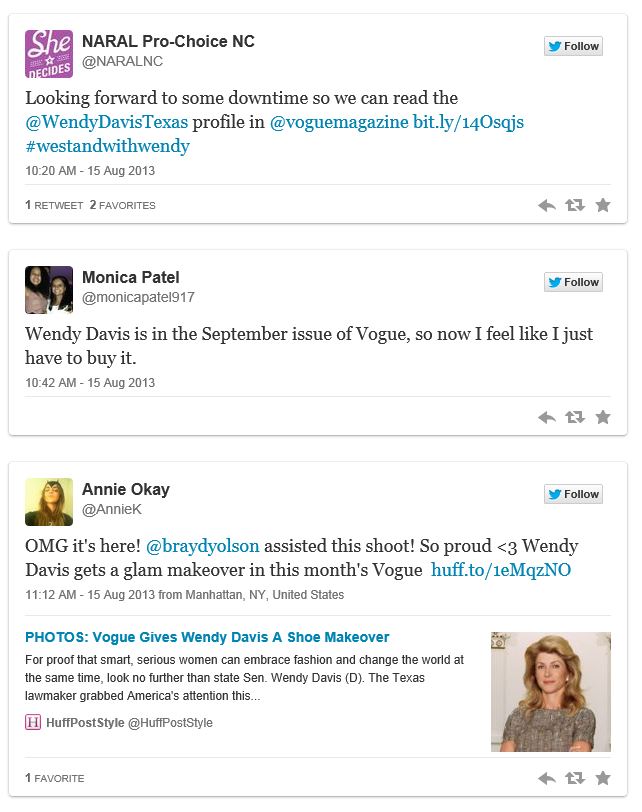 New York Magazine had a tingle up its leg because Davis wore high heels for her Vogue fashion shoot: 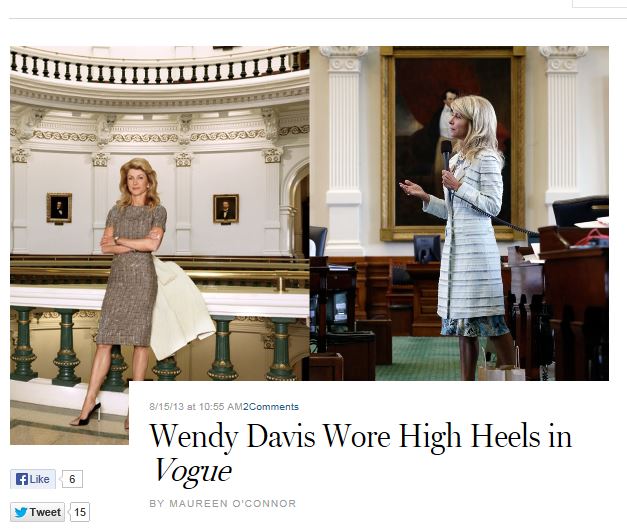 Abortion Barbie was not a swipe at Davis’ gender, anymore than referring to Mitt Romney as Ken (of the Ken and Barbie combo) was sexist: 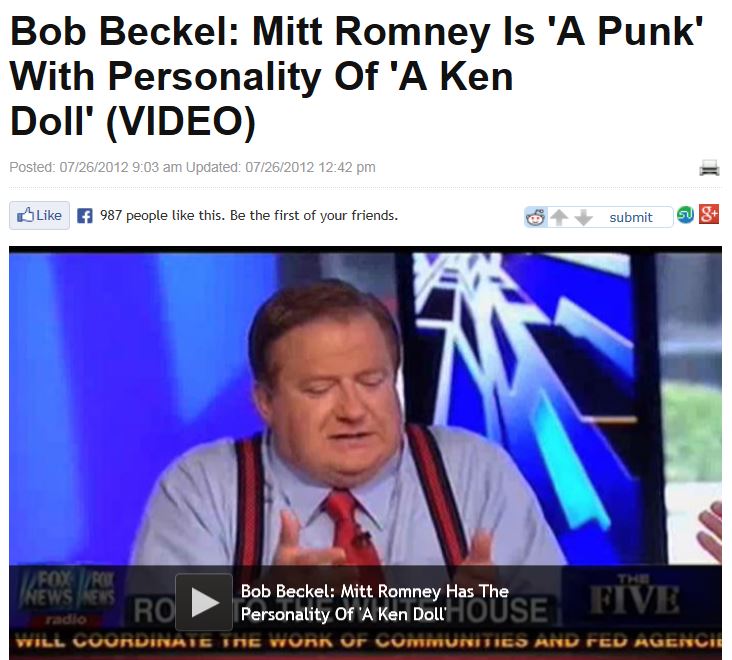 The feminist Women Rise Up blog, among others, ran photos of Romney as the Ken doll: 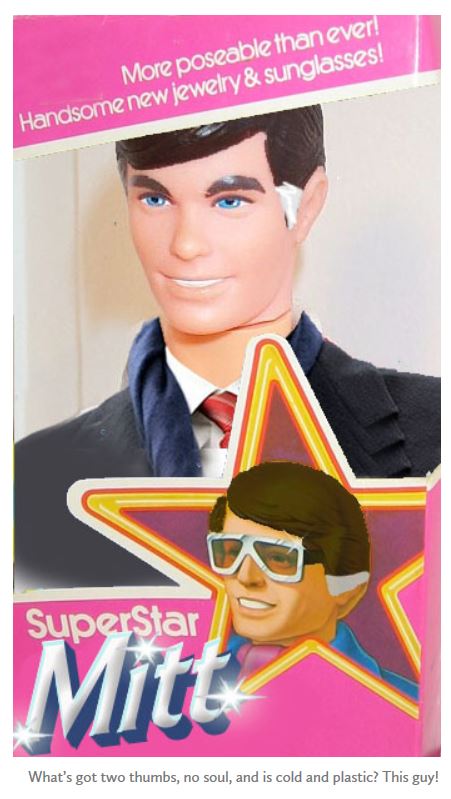 Barbie and Ken comparisons may be demeaning to politicians because the terms portray an image of good looks but empty-headedness.  The terms are not, however, in themselves sexist.

“Abortion Barbie” has sparked arguments on Twitter, and at The Dallas Morning News, among other places. 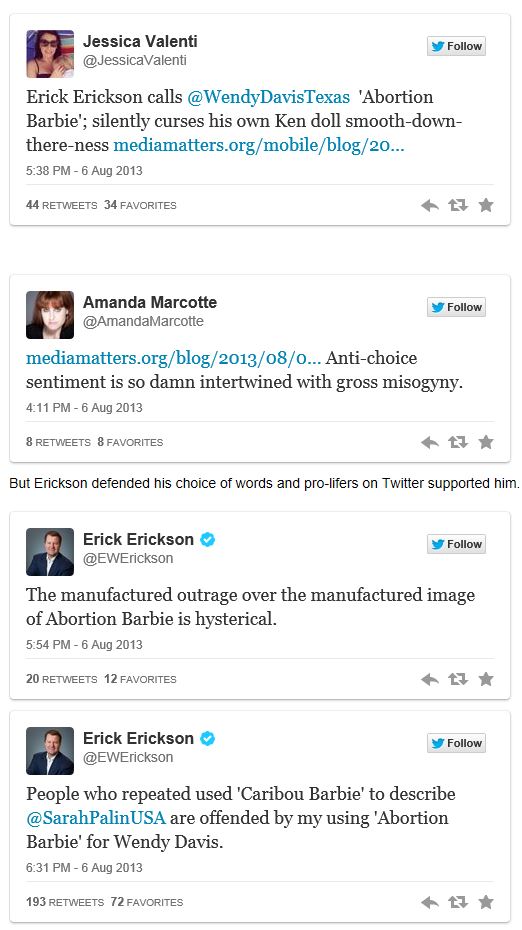 Kirsten Powers called the term “Beyond Sexist” and equated it to “Caribou Barbie” (via Twitchy):

Unlike with Palin, there is no concerted media effort to sexualize Davis.

“Abortion Barbie” is a reference to the liberal media’s obsession with Davis’ clothing and Davis’ ignorance of the most important abortion story of the millennium even though advocating for abortion is Davis’ claim to fame.

A derisive nickname for a politician only works when it makes sense, even if hyperbole.

Whether or not “Abortion Barbie” is off limits, I suspect it’s a moniker that will stick.  Like tundra black flies to a Caribou.

I, for one, will only reference her using the Abortion Barbie moniker. Alinsky would be proud…or something.

I’m willing to compromise with Wendy “Angel of Death” or “Bloody Dead Baby” Davis if she really is bothered by the word Abortion.

“Alinsky would be proud…or something.”

Alinsky would be highly irritated we were using PR-judo on his ass. Or their asses.

And Abortion Barbie has about as much chance of being governor of Texas as I have of being the next Chief Justice.

Well, but Barack became president after a mumbo-jumbo speech at the 2004 Dem convention.

Wendy Davis, with her bleached blonde hair, looks more like a Barbie than Palin anyway. Davis also has more of that cheap, plastic feel about her than Palin does.

They can dish it out but they can’t take it. How much more evidence do you need?

Abortion Barbie. Will the Right make it stick? I doubt it. We don’t play that game, we just lose it.

While KP does show spurts of common sense – in this case she is WRONG. In real life I would agree that calling a woman a “Barbie” is sexist however Davis has chosen to host her sail on abortion as well as her femininity.

The LEFT has used offensive sexist terms about Palin ever since she was the VP nominee and if KP has chastised the Left they haven’t listened. She should heal her own house before she worries about the other side.

I hope the term “Abortion Barbie” becomes synonymous with Wendy. If she wants to play in the big league she better put on her big girl panties.

Yep. It reminds me of the hissy fit they threw when Sarah Palin talked about “death panels”. The left’s entire strategy ALWAYS depends on appealing to emotion. Facts, data, logic and reason, if they are ever employed at all, are secondary.

So emotional euphemisms are a powerful weapon used by the left to generate public support for their policy preferences. Had Palin not used the term death panels, and instead used its formal name, the Independent Payment Advisory Board, or used the acronym IPAB, people would have yawned and tuned her out. But by using the term “death panels” it creates the same emotional reaction that the left excels at. They hated her for it because she beat them at their own game. Just as Erick Erickson’s brilliant coinage of “Abortion Barbie” generates an emotional response in people.

Our side is learning.

Although Davis is not nearly as pretty as Palin, and an obvious Barbie-wannabee, bleached hair, etc., I’m on board with Abortion Barbie. Will do whatever I can. It’s rare enough that the Dems even have a pale imitation of a wannabe Barbie to promote.

I’ll never call Hillary the “Bi-Barbie.” To me, she’ll always be the “Queen of Benghazi.”

I kinda like Baby-Killing Barbie. More accurate. During WWII, Wendy Davis would’ve been one of Hitler’s Furies.

Awwwww…. proggies are bothered? Tough effing shyte. The name is now officially sealed, she might as well change her birth certificate. If they proggies whine you know you’re scoring points. Eff em.

How about, The Gosnell Candidate?

Abortion Barbie has children. A simple question for her. Did you talk to your children in utero? Sing to them? Play music for them? If so, why?

AKA “The ones that got away.”

“You shoulda seen ’em. [Stretches parallel palms out to approximate a catch almost 19″ long.] This big and almost fully developed!”

When I look at the HUGE number of people here in TX who are Christian, in one way or another (and I see them every single day where I live), you can safely bet the moniker “Abortion Barbie” will stick out like a pus-filled sore thumb.

Who wants to have anything to do with that?!?

“I suspect it’s a moniker that will stick. Like tundra black flies to a Caribou.”

And 50 Million Leftists will Tell You: Abortion is Sexier than Raising a Down Syndrome Child.

But at least she will still have her pink shoes, bleached blonde hair, and a nice collage of dead babies to console her.

“Go on,” he prodded, hiding his acute arousal with a feigned look of constipated liberal non-judgmentalism.

OK, I don’t kar who you air, that thar was FUNNY…

Abortion is homicide. How about Homicidal Wendy? And she could wear a Totenkopf pin (with a hole in the skull) on her lapel.

Abortion fanatic and d-cRAT extremist davis already has her campaign well defined:
Her official campaign color will be “fetus blood red.”
Her honorary campaign manager will be the Butcher of Philly, Kermit Gosnell
Her principal campaign adviser will be Satan
Her main fundraisers will be heathen succubus pelosi and all the members of pelosi’s coven.
Her main campaign workers will be The Seven Deadly Sins.

Looking at the pics, I would say Abortion Olive Oyl would be more accurate.
Didn’t they base the movie “Legally Blonde” on her? Or was it “Clueless”?

There is nothing more important than preserving individual dignity and the intrinsic (i.e. unearned) value of human life. Elective abortion is neither a right nor an ethical, let alone a moral, treatment of human life. The pro-abortion people have taken the wrong position and they should answer for their choice. They should be taken to task for their crimes against humanity.

Liberty is only suitable and possible for women and men capable of self-moderating, responsible behavior. The decision of pro-abortion to commit and pro-choice to support premeditated murder of a human life for reason of material, physical, or egoistic benefit is unconscionable. Women do have a choice. It is before conception. Men do have a choice. It is to accept responsibility for their actions.

That said, as Obamacare supports elective abortion. As it is still in gestation. Merely a clump of policies. Dismember it. Vacuum it. Flush it. Americans.. people deserve better than to normalize degenerate policies and behaviors.

Help us all. Here we go again. This is apparently how candidates are chosen.