Is Buzzfeed the new home for viral conservative listicles?

Is Buzzfeed the new home for viral conservative listicles?

Buzzfeed seems to engender pretty strong feelings all around.  Mostly the criticism was from the right during the election, but I’m seeing grumbling from the left lately as well.

I cautioned last February not to underestimate BuzzFeed Politics, which is an emerging force in news and uses cats to maximum effect.  Despite my tongue-in-cheek post, 5 Signs BuzzFeed May Have Peaked, I’m not really seeing the engine slowing down.  They have a lot of dollars, very talented staff, and they have me pegged.

It must be some kind of Sun Tzu military theory: “The supreme art of war is to subdue the enemy without fighting.”

(Buzzfeed: Some of our best friends are Conservative)

I first noticed that when two of the best listicles I’ve seen from the conservative side showed up at Buzzfeed. 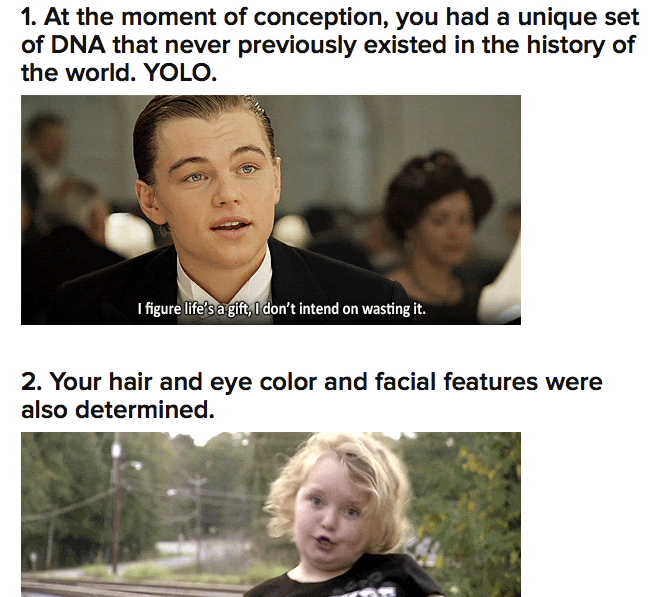 National Right to Life as well as Students4Life each have several other highly effective pro-life listicles at Buzzfeed Community.  I particularly like Students4Life’s Top 9 Memes that Expose #BroChoice for What it Really Is: 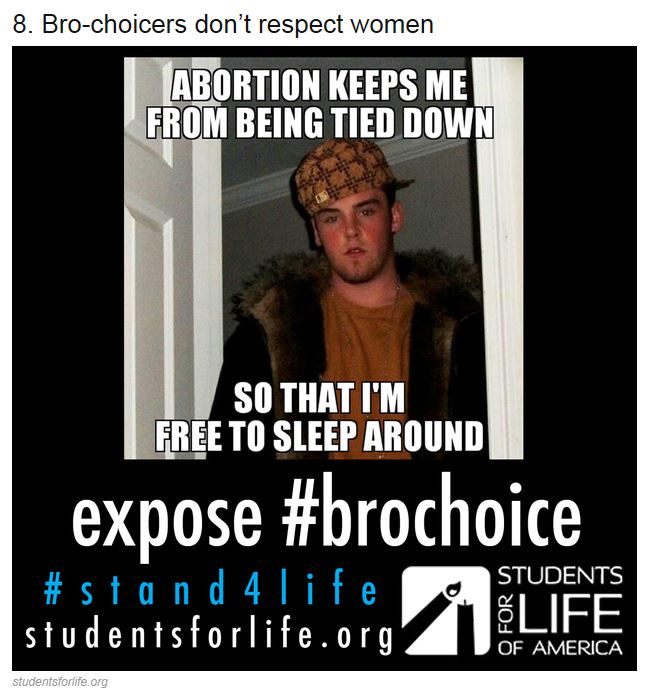 The second was by John Ekdahl, who writes at Ace of Spades HQ, 14 Principled Anti-War Celebrities We Fear May Have Been Kidnapped.  The Ekdahl post has over 800,000 views at Buzzfeed.  While not billed as “conservative,” it relentlessly mocked liberal Hollywood and music celebrities, and was shared far and wide outside Buzzfeed. 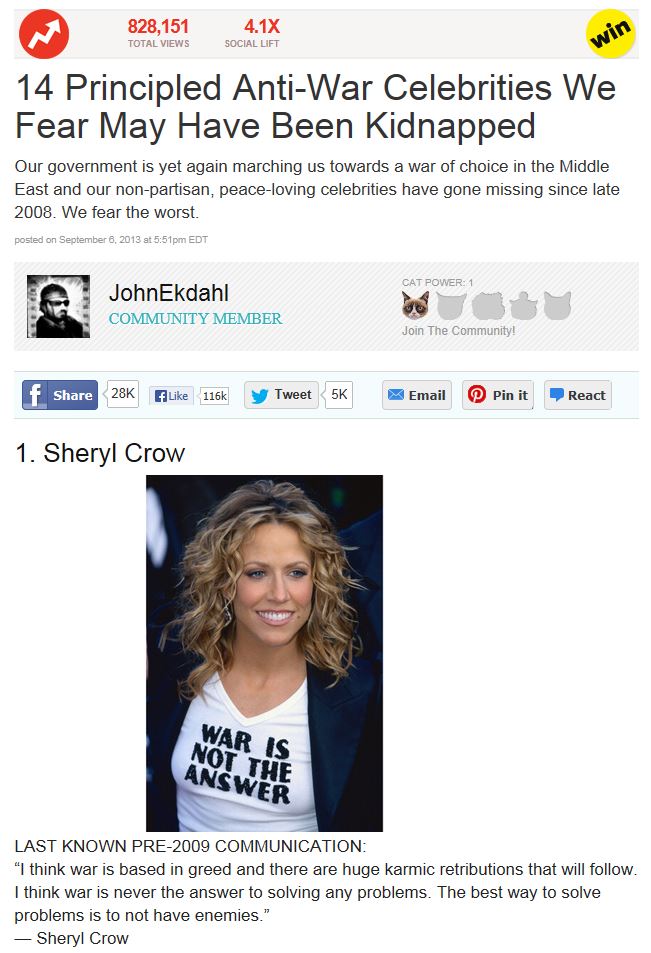 So what’s up with this conservative stuff at Buzzfeed?

The first thing you need to understand is that we cannot take over Buzzfeed.

But Buzzfeed decides which Community posts get promoted to appear on the Buzzfeed website.

@BuzzFeedBen @originalgriz @jesseberney Contributors are free to post unpopular opinions, but we are under no obligation to promote it.

The Ekdahl post was promoted, and I think the Right to Life one was as well (I couldn’t verify that going back to August).

I haven’t tried to quantify how many “conservative” posts get promoted versus “liberal” posts, but I can say that the overwhelming number of Community posts that are promoted have nothing to do with politics.  Of course, there’s no reason for liberal readers to create liberal listicles at Buzzfeed Community, Buzzfeed staff does that.

This really is a brilliant concept.  Get people to create posts, and pick and choose which to promote.  It’s free content for Buzzfeed, without the downside of junky stuff showing up on the website.

In the case of conservative listicles, it also draws in conservative readers who might otherwise not visit Buzzfeed.  And it makes it harder to criticize Buzzfeed when conservative posts go viral there.  (Of course, it would be great if the staff-created offerings were more varied.)

I should note that very recently Buzzfeed has started adding disclaimers to User profiles, essentially stating that the entry is user contributed.

Here’s how the National Right to Life entry appeared originally and how it appears now: 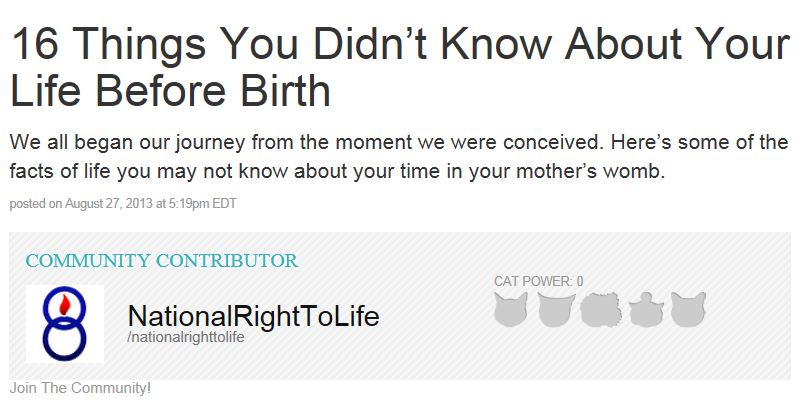 I emailed Ben Smith, Editor-in-Chief of Buzzfeed about this, and he stated that this was being applied across the board, not just to “conservative” users or posts.  He pointed me to a similar change with Planned Parenthood:

This is part of a Buzzfeed struggle to figure out how “open” it wants to be in its Community section:

As much as conservative-oriented websites try, it’s hard to beat the Buzzfeed template — they know listicles.

Time will tell whether Buzzfeed Community develops into a place where conservatives have a presence, or whether “All war is deception.”

At least with cows, you can understand that they don’t give milk if they’re not pregnant. And, farmers make sure the cows are immediately impregnated as soon as the calf is born.

Because the milk doesn’t stop coming.

You can make an ad that makes Hitler looking good. (Meanwhile, he had a dozen years at the helm of germany, before he swallowed a bullet.)

Before the 1950’s it was hard for couples to even get condoms, which was what most couples used … if they weren’t using the (unsuccessful) withdrawal method.

Then there was the supreme court case, where finally condoms no longer had to stay hidden behind the pharmacist’s counter.

Men having to go to the drug store and buy condoms. Where they had to ask the pharmacist!

And, teenage girls who had to shop for Kotex.

We live in a world, today, that’s much more grown up.

And, Catholic women no longer need to have doctors take out their uteruses when they turned 32. Healthy uteruses. And, instant menopause, because choices to stop pregnancies were so few.

Maybe, too, if Leonard DiCaprio sold his sperm, there’d be thousands of women a month who’d be interested in making the purchase. And, they’d all get pregnant through gynecologists who promised beautiful blue eyed babies?

Heck, today, women know beforehand what the sex of the fetus is, that they’re carrying. This wasn’t true when I was born. And, my parents were convinced they’d get a son. So they didn’t even have a daughter’s name picked out.

It also may be an urban legend, but the station wagon came to market because families couldn’t fit all their kids in the back seat of 4-door-sedans.

My parents only had two kids in the 1950’s but bought a station wagon so it was harder for my brother and I to tussle and fight in the car while it was moving. Pulling over every five minutes to threaten kids did not lead to good mileage.

But with gas at 12 cents a gallon, did it matter?

Everything’s relative. Most people weren’t earning as much money then either.

The insides of the reproductive system of a cow are much like the human woman. Did you know that?

My Dad just got a vasectomy. So, what is the big deal?

PS. The Definition of Macho: jogging home from your own vasectomy!

The first time I went to Buzzfeed I was, and still am, horrified at the layout and the profoundly insane assortment of subject matter. Though I have to admit that I too venture into that warped lions den, like that cat I flip through very quickly before my conscious says ‘what the heck are you doing Joy? This stuff is 99.9% crap!”

It used to be that I only went there on really slow news days to search for an interesting tidbit or opinion but I increasing find myself visiting there every day.

It’s tough being a news junkie. 🙁

I notice a pernicious trend on this blog to conflate “conservatives” with “social conservatives”. The two concepts are distinct. MSNBC, among others, works diligently to confuse the public about that; no good can come of helping them out.

The obvious schism between social and fiscal conservatives is perhaps the most significant development in American politics of the past decade.

To clarify, social conservatives are those who put their anti-abortion beliefs front and center. Fiscal conservatives are the people who believe that it’s bad practice for a government (or any organization) to act as if money grows on trees. They believe in some obvious corollaries, too – opposition to the ever-expanding bureaucratic state, Constitutional government, support of business, belief in freedom and individual initiative, personal responsibility, etc etc.

Fiscal conservatives need a party and a catchy name. That might help to make the schism more apparent. But obvious choices like the Freedom Party, the Constitutional Party, or the Competent Fiscal Arithmetic Party, while descriptive enough, don’t really sing. “Tea Party” doesn’t sing, either. It’s a frivolous name for a serious concept.

This is an interesting maneuver by Buzzfeed. Two absolute non-negotiables of the left are abortion and sodomy. They’ll give on taxes and war, but never the big two. Giving NRTL space for anything apart from derision is usually a crime. As we see from Carol’s comment, it really gets to folks. Pieces like NRTL and Gosnell can seriously damage the cause.

Erect a separate page (like the one for the Tip Line) where articles submitted by registered LI readers are screened and those judged good enough posted. The best ones could be promoted to the main page.

If that prompts an unmanageable deluge of submissions, perhaps go with a ‘by invitation only’ system, wherein private email invitations are sent to LI registrants the LI management believes might do well with it.

Your title is killing me. Conservative listicles? Just when we were thinking what we could get John Boehner for Christmas.

Yes, I feel all alone in a brave new world where new words are being invented every hour. What the heck is a listicle????

Listicle = list + article (“list” with the last four letters of article). An article that’s primarily a list. I’m not sure whether we should thank USAToday (short articles) or David Letterman (top ten lists) for the word.

If I put my testimony on a listicle, does that make it a testicle?

Fun Fact: The very word Testimony derives from the word Testes, as it was the “Swearing upon the honor of one’s *balls* that what was spoken was, in fact, the truth.”

Professor, All war is deception. Let’s not deceive ourselves too to think that perception is reality:

I see Toonces is helping the Obama Admin with Syria. Hell, it couldn’t be any worse than those already working the issue.

My most recent favorite is this: 19 Delightfully Macabre Disney Heroines…just in time for Halloween. 😀