Do not underestimate BuzzFeed Politics

Do not underestimate BuzzFeed Politics

Posted by William A. Jacobson Wednesday, February 6, 2013 at 10:04am 24 Comments
More Sharing Options

I consider BuzzFeed Politics to be one of the most influential websites at setting the narrative in the blogosphere, and to some extent the more mainstream media.

That influence only is going to grow due to the well-funded Buzzfeed brand, which just raised $19 million in additional funding, and a group of talented people led by Ben Smith.  You don’t need to like what or how they do it, but please don’t deny that they are very good at what they do.

BuzzFeed Politics manages to integrate the culture and the politics in a way no conservative website does, all under the umbrella of a news operation with a White House correspondent and reporters who follow candidates on the trail.

To understand how important BuzzFeed Politics is to BuzzFeed, look at the homepage today, which highlights the Marco Rubio interview (more on that below).  Note that the Politics link in the navbar is in the prime far left position:

No one who followed BuzzFeed Politics during the election cycle could have any doubt who they wanted to win.  There’s nothing wrong with that; I only object to media bias when it’s denied and not transparent.  I don’t think BuzzFeed Politics was transparent in that regard.

Ben Smith’s interview with Marco Rubio is a good example of how BuzzFeed Politics combines straight reporting with the culture. Right off the bat Rubio is asked about rappers, a topic in which he was fluent unlike almost everyone else on our side of the aisle.

Rubio has been criticized for allowing himself to be marginalized in the interview on the rapper and other issues; it’s kind of a “Hey Marco, they’re laughing at you, not with you” type analysis.

I’m not so sure about that. You certainly could make the case that as much as we may not relate to “the culture,” we need to because there are plenty of younger voters who relate to “the culture” but also inherently are drawn to conservative economic ideas.  I thought Rubio excelled in the interview on substance and style.

Yet, when you see how BuzzFeed Politics played the interview, I tend to go with the “laughing at you” analysis: 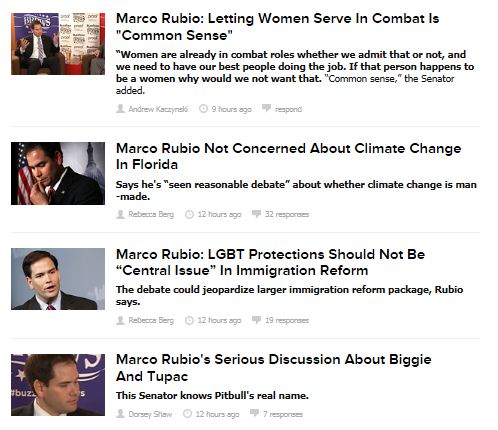 The integration of the culture and the politics is a topic we’ll be exploring.

It’s sad that our culture has been denigrated so low that this website has any credibility.

I think its more a denigration of the news agencies in general that gives rise to website news.

That’s what I’ve long been saying. Everybody’s been prating about Rubio, Rubio, Rubio this great Conservative. IMO, he’s like Obama in that he gives a great speech and doesn’t believe jack of it. Like Christie, he’s a blowhard. The nerve of this guy who’s intending to deliver the GOP SOTU response in Spanish. In Spanish! I don’t care how many Spanish-speakers there are in the USA, this is bloody America. It’s not Cuba. It’s not Mexico. Rubio cares more about illegal aliens who can’t vote for him and won’t vote for him than he does about Americans who have voted for him.

BuzzFeed? It strikes me as Politico crossed with TMZ, with a little Jerry Springer sprinkled in their somehow. Is it just a place for eyeballs versus a true influence on opinion? I just wonder how much ‘news’ or even ‘opinion’ that influences a measurable portion of the nation originates with BuzzFeed. Maybe more than I am aware.

Are we being softened up for a BuzzFeed-like morphing of LI/CI into a conservative politics & culture model?

Another reason to miss Breitbart.

No one can be more amazed than Ben Smith himself that people take him – a shallow, unaccomplished, juvenile poser – seriously.

The LGBT headline was staggering. What do lesbians, gays, transgenders and bisexuals have to do with immigration policy? Not that the connoisseurs of finest cat-gawking gifs are capable of such distinctions, mind you. Nevertheless, BuzzFeed banks on that ignorance.

There is one sure way to blow up immigration reform and that is to make LGBT protections and same-sex marriage part of the package. Of course there is no way for Rubio to make that point without granting BuzzFeed the opportunity to smear him in a headline.

All that said, there is no denying BuzzFeed’s influence particularly when it comes to shaping the minds of the mindless. There are really only two solutions here, compete with it or infiltrate. The latter seems unlikely but the former is about the best use of some right-leaning libertarian-minded donors’ dollars I can think of. I wouldn’t go the route of calling it some Fox News alternative or anything. It should be something done subtly and with lots of crazy cat pics to boot.

If it were just me, I would not give them any interviews whatsoever. Why would I want to be humiliated by people who hate me and my guts to begin with?

Sure, you want to be able to, ahem, “reach out to the other side”. But how can you do that when they will hate you and your guts anyway, and would tear you to pieces at their first opportunity?

Nope. Not one interview. Don’t even dignify them with a “Hello.” When you hear they want to talk to you, you should know from the get-go they’re full of $#!%, and they will destroy you.

Don’t give the enemy what they want.

That is the ANTI-Breitbart position.

We need to take it to them, and we can…and some even DO.

People actually seeing a Rubio or Ryan or Rand Paul and listening to them see they are NOT the demons some Collectivists are portraying them to be.

We can’t compartmentalize ourselves. That leads to simply ceding the field.

I think commenters are missing the point, which Prof. Jacobson stated clearly —

You don’t need to like what or how they do it, but please don’t deny that they are very good at what they do.

Commenters are taking the time to exclaim that they don’t like Buzzfeed.

Buzzfeed is very good at what they do, whether you like them or not.

Mr. Breitbart, had he not died, would (I think) have evolved his media empire to do what Buzzfeed is doing, though of course it would have looked different. But he clearly understood the power (explicit and implicit) that came from being able to join politics to culture in an entertaining way.

I think PJMedia wanted to do this but for whatever reason that hasn’t worked very well. The seed money required is modest for the right person or group — the Koch Brothers could fund this without much strain. The key is finding the right people. Again, you don’t have to like or respect Ben Smith, but recognize that he’s very good at what he does. For whatever reason the progressives tend to find people who are natural wordsmiths and get them into these slots.

For the conservative side, now that Andrew is gone I wonder about some combination of people who are politically savvy (e.g., Mark Steyn, William Jacobson) and culturally with it (e.g., Mary Katherine Ham).

A conservative version of Buzzfeed might fly, but it needs to start now to be useful by 2016.

If BuzzFeed is “important”, then we’re doomed.

I think if we keep dismissing them, we really are doomed.

This is the web version of Pavlov.

Serve up non-political disposable information in proximity to political pieces and the user will naturally coalesce the two for you.

Current example: Most of my self-professed left-wing co-workers got hook on the NYTimes through its Real Estate, Entertainment, Travel and Fashion section. The politics of the paper is perceived to be true because it appears in proximity to personally useful information.

You don’t need to be a Breitbart or PJTV to grow this kind of traffic. A site that offers celeb news, fashion news, technology news, job and real estate postings, weather report followed by a two paragraph feature on Benghazi will get more traction than a conservative site that offers two full page on Benghazi and …nothing else.

So now a politician must listen to mindless drivel in ord to secure votes? It’s not enough that so much of the youth are mind numbed by the idiocy spouted by rappers but now politicians must demonstrate they are down with that too. Whatever happened to people having their own taste in things?

Our culture has been overtaken by idiots who can’t think, can’t spell, can’t rhyme, and have more money than sense. Eh, looking at that list, I’ve come to the conclusion, with the exception of the rhyme, politicians and rappers deserve each other, except the pols.

“look at the goofy republican” is a step up from the vile hatred showed by so much of the rest of the media.

But they are of a piece. The media have a real bigotry against Republicans and Conservatives that distorts their reporting even when they think they are being fair.

This is not new, that simple-minded popular culture is making a mockery of conservatives, morals, and republicans. This has been occurring for decades. The greatest mystery in the world to me is why we have not been fighting back. If we had, Obama may not be president today. In the 1970’s SNL was liberal. The “cutting edge” prime time sitcoms promoted leftist ideas. Fox New alone is not cutting it. We need sitcoms, more movies, etc to promote our ideas, using young actors. Have you watched Disney Channel and Nickelodeon? For over four years I have to hear “Change” as a theme and watch Michelle Obama’s mug appear.

That is commonly known as confusing emotions with thinking.

Well, the Blaze tries. Unfortunately, their cultural coverage tends toward UFO clips and bigfoot testimonials, which are typically difficult to integrate with politics.

[…] don't need their own BuzzFeed clone. What conservatives need is some genuine […]

[…] don’t need their own BuzzFeed clone. What conservatives need is some genuine […]