Say what you will about @BuzzfeedPol, they’ve got me pegged

Say what you will about @BuzzfeedPol, they’ve got me pegged

And they have a very well done post, luring the likes of me into their lair:

What Kind Of Conservative Are You?

This scientific quiz is the only way to be sure. Just in time for CPAC!

Okay, I took the quiz, and this was the result: 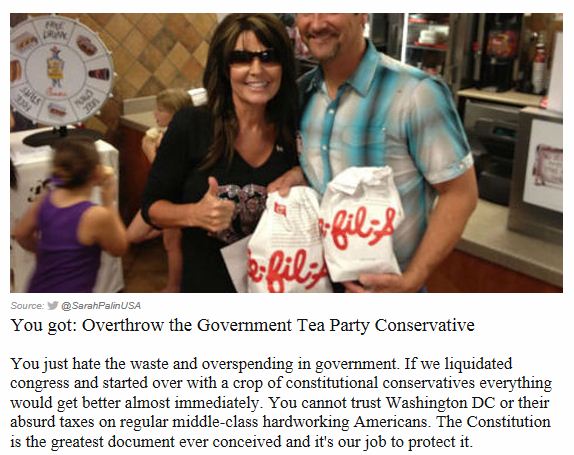 I got the same thing as you did. It figures that they include “overthrow the government,” though, given that it’s buzzfeed. They just can’t seem to grasp that wanting our government to be limited and to adhere to the Constitution is not “overthrowing” the government at all. Well, I guess it is if you think that government should have no limits, know no bounds, and do whatever it likes to whomever it likes any time it likes.

It said I was a Libertarian. Strange, I usually get called a state-ist by libertarians. I think I’m a Conservative with libertarian leanings.

I got Libertarian too and like you I consider myself conservative with libertarian leanings. Let’s face it, some of the difference according to Buzzfeed comes down to whether you see yourself in a bikini or dressed as Ben Franklin at political events. Don’t forget the superhero with whom you most identify provides critical psychological insight into your political philosophy too 😛

Must have been the Hulk answer. No I’m not saying I’m strong,just p!$$3d off.

I was walking home one evening and came upon a clearly depressed man standing at the edge of a bridge, looking like he was about to jump. I called out to him to wait, and ran over to see what was the matter.

“It’s this country,” he lamented. “It’s falling into ruin and there’s nothing I can do about it. The election was the last straw. I don’t want to live on this planet anymore.”

“Well cheer up,” I said. “We’re all in this together. Say, are you a conservative, or a libertarian?”

“A libertarian,” he said.

“That’s great!” I said. “See, you’re not alone. Are you a free-market libertarian or a libertarian socialist?”

“Hey, so am I!” I said. “Chicago or Austrian school of economics?”

“Me too,” I said. “Hayek or Rothbardian strand?”

“Same here,” I said. “Are you a consequentialist or deontological libertarian?”

So I said, “Die, statist scum!” and pushed him off the bridge.

Point me to the line that you’re forming Professor–I figure you’ll have a lot of company on it.

I got “Overthrow the Government Tea Party Calvin Coolidge is Cool Conservative Libertarian: “The business of America is business.””

Me too..
You got: Overthrow the Government Tea Party Conservative

You just hate the waste and overspending in government. If we liquidated congress and started over with a crop of constitutional conservatives everything would get better almost immediately. You cannot trust Washington DC or their absurd taxes on regular middle-class hardworking Americans. The Constitution is the greatest document ever conceived and it’s our job to protect it.

Just laughed when I read this post Professor! Excellent, I knew there was some reason I liked your blog. Did they send a coupon for some Chick-fil-A sandwiches?

Remember friends: we are the heirs of the Enlightenment and American Revolution.

THEY are the counterrevolutionaries, reactionaries, and feudalists.

Gee. I thought the TEA Party Conservatives wanted to preserve the government, and contain the damage from the economically unsound decisions by the current administration.

Sometimes even a thoroughbred needs a bullet to the head to put it out of its misery.

I got the same thing, too. But I bet we had different answers on at least a couple of the questions.

On the first question I had a hard time deciding which liberal I hate most. It was easy to narrow it down between “Economic Justice Liberal” and “Tax and Spend Liberal”, but deciding between the two is hard because they’re both neo-socialists who want to use government coercion to take property from people who work hard to earn it and give it to someone else. I could have gone either way on that one. I chose the “Economic Justice Liberal” because the Occupy Wall Streeters failed to learn the lessons of the 20th century that using government coercion to enforce economic equality is pure socialism and the end game with that is demoralization, misery and lower overall standards of living. Plus, OWSers assholes.

You got: Whoa, you’re a Libertarian!

Yeah, you knew what you were doing. You’re not technically a “conservative” but let’s be honest, who do you trust most with your civil liberties? Individual liberty, political freedom, and voluntary association for all, down with the state!

I’ll answer to ‘libertarian’ or ‘conservative’.

I’ll agree with ‘Shrink the State’, not with ‘Down with the State’.

Call me a Peace through Strength libertarian.

Professor, I think you can now make a ton of money by linking to any pitchforks and ready-to-light torches on Amazon!

You really need to come up with your own line of shirts, mugs and bumper-stickers – especially with the bumper-sticker-of-the-day theme going.

I got: Overthrow the Government Tea Party Conservative

What it really means is am a Macerate the Liberals’ Power Tea Party Conservative.

You got: Kicking Ass Conservative!

America First! You love this country and perhaps served in the Armed Forces. There is nothing more important than a strong national defense and when people mess with America they should expect a Holy ass whipping.

Strange, because this really isn’t how I identify as a conservative.

it is a poor quiz. the options are leading and limited. the seem designed to make one look extreme when one is not extreme.

I wonder what if any agenda is behind the make up of the quiz. (coincidently I scored the same as you)

You got: Old-School, Traditionalist Conservative
You love conservatism the way John Locke loved property rights. America is the head of Western Civilization due to robust social and economic traditions and principles. Russell Kirk, Edmund Burke and William F. Buckley Jr. are heroes.

The choices in the poll are limited, but I think the exercise is worthwhile. It shows that we are not alone. I could quibble though. It really is more “Restore the Constitution to its rightful place, and restore consequences for violating it” Conservative.

“You got: Whoa, you’re a Libertarian!
Yeah, you knew what you were doing. You’re not technically a “conservative” but let’s be honest, who do you trust most with your civil liberties? Individual liberty, political freedom, and voluntary association for all, down with the state! ”

Neither party, I assure you. Just because I am forced by convention to pick one should never suggest to anyone ever that I actually trust Republicans an iota more than Democrats.

They both equally wish to ruin your liberties, they just target different ones.

It may not be the greatest document every conceived; but, when coupled with our national charter, The Declaration of Independence, it is far and away a superior alternative to most other guidance conceived by mortal minds. Together, they recognize individual dignity, intrinsic value of human life from conception to grave, and the political causes of dysfunctional convergence (i.e. clusterfuck).

correction: Not conception, but “creation”, which may or may not be equivalent. Also, not just intrinsic value, but unalienable rights to Life, Liberty, and pursuit of Happiness, which is presumably codified in The Constitution.

to the poster who said it was a poor test
Lighten Up Francis
Did you need a disclamier that it was intended purely for entertaiment?

They needed an “all of the above” option for more than a few questions.

I got “You are a drone magnet.” What the hell?

I’m an old school traditionalist. I think the labeling might be a little off, because being old school I had no idea who the pop culture characters were in some of their questions, so I just checked something off.