Salon.com, which is quite White, has pretty much turned itself over to White liberals making ridiculously overbroad generalized complaints about Whites and White Privilege to get attention. David Sirota practically owns the genre.

Gawker is going there as well, and based on the number of views and comments, it seems like really good bait:

Here’s the Editor of Gawker tweeting out the post link, apparently recognizing the irony/absurdity:

Here is a White writer telling other White people how horrible they are http://t.co/bw3n1LdcMe

The entire premise is link-bait hyperbole — as if nothing has changed since 1963 and all Whites are responsible and have to hear it from White liberal writers.

According to the post, the impetus for the sweeping condemnation of Whites was a comment made by some guy watching television at a rest stop as John Lewis was on the television, emphasis mine:

The white guy was looking up at the TV in a rest stop on the Jersey Turnpike. Onscreen, the news was showing John Lewis speaking at the anniversary of the March on Washington. “I am not going to stand by and let the Supreme Court take the right to vote away from us,” Lewis said. The white guy in the rest stop glared at the TV, then looked around the dining space. What’s he TALKING about? he asked his family or the air, the world around him. He was seething; he wanted to be heard. He HAS the right to vote.

His kids—three of them, dark blond—kept eating their fast food. His female companion said nothing. His angry, stupid, would-be-superior observation hung in the air, useless.

Well, that comment sure proves that nothing has changed in 50 years, and White people still are ruining everything.

It’s a schtick in the David Sirota style, with the more outlandish the “White” headline, the bigger the bait for people to click over and complain about it.  (Yeah, I took the bait too.)

This doubtless creates the proof they seek that they were right all along. The circular logic goes like this:

Make an outlandish statement about White people.
Watch White people react in denial.
Use denial reaction as proof you were right all along.

Of course, that logic does not hold as applied to any other race, ethnic group or religion.

The rest of the post is the usual liberal pablum.

But this paragraph held special meaning to me (emphasis added):

What white people fear, at bottom, is retribution. This is why discussion of actual injustice is supposed to be off-limits. Despite the glorious principles spelled out 50 years ago on the steps of the Lincoln Memorial, they lack a functioning concept of justice. To admit the harms of the past is to invite payback. When Andrew Breitbart raised a race panic over Shirley Sherrod, the real issue was that he and his followers were incapable of understanding Sherrod’s story of transcending racial resentment. They were too trapped by rage and paranoia to get the point. 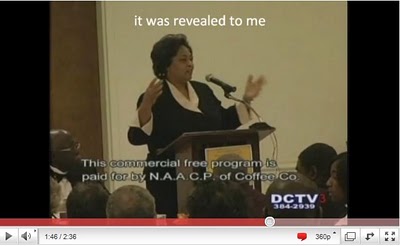 Rather than address my analysis, the author merely calls it the result of “rage and paranoia.”

Just the opposite was true. Rather than react with histrionics, I analyzed the tape methodically, and thereby demonstrated that the race-baiting antics directed at Andrew Breibart were groundless.

Guess who was part of the anti-Breitbart antics at the time? You guessed it, the author of the Gawker article, when he was at Slate.com.

Don’t get mad.  Just keep repeating the truth after me: “The Shirley Sherrod tape still is not misleading.”

Update:  This may be just one aspect of what Ace refers to as Slate’s Outrage-Trolling Business Model, the increasing tendency of left-wing websites to link-bait through crazy articles.

Who are they trying to convince?

Other lieberals? (Many)Blacks?
Those are already in the liberal camp.
Conservatives?
They’ll probably not even read the article.

Or, are they merely narcissists engaging in digital ego stroking?

They’re not liberals, they’re “progressives.” All I can come up with is that they’re just plain lazy. They don’t want to actually examine and confront the real problems that face us today, so they manufacture injustices and tilt at windmills and then, presumably, collapse into a righteous haze of disengaged self-satisfaction.

Is it because people are escaping from the Democrat Plantation? I did!

Salon.con should come up with a 12 step program to become less white, less questioning. There is a higher power and it is Eric Holder.

1st step: Walk it like they talk it. Fire all the white people and replace them with people of color.

Great idea. The magazine would collapse in 6 months and we’d never have to hear from them again.

What’s he TALKING about?

Oh, my! That’s the most racist question a white man could ask! He should be arrested for a hate crime. /sarc

Am I the only one that read that, and thought “That’s pure fiction”?

His angry, stupid, would-be-superior observation hung in the air, useless.

It sounded manufactured to me, too. There’s no way to verify it.

…Yeah, but white priveledge comes in so many colors…

How did the Washington Post cover the King speech in 1963? In typical “white liberal” fashion, they were afraid the black marchers would cause trouble. As to “The Speech,” they almost failed to mention it at all the next day. In the words of one of their own:

The black guy was looking up at the TV in a rest stop on the Jersey Turnpike. Onscreen, the news was showing the governor of North Carolina. “I am not going to stand by and allow voter fraud to continue. We are simply requiring that citizens present the same documentation required to cash a check, get on a plane, or get a library card.” The black guy in the rest stop glared at the TV, then looked around the dining space. What’s he TALKING about? he asked his family or the air, the world around him. He was seething. He HAS voted multiple times in multiple places in the same election, posing as people who have been dead for years.

His kids—three of them, kept eating their fast food. His female companion said nothing. His angry, stupid, would-be-victim of racism observation hung in the air, useless.

White Democrats’ high-pitched race screaming is for relevance which now boycotts them as a result of the Zimmerman trial.

They were all outed as pathological race-industry liars seeking a bogus political superiority.

The public fork is in them.

Watch them pitifully writhe and scream.

Smirking at them is allowed and, indeed, encouraged.

The fact they are full postal, proves it is NOT working.

Like 2-year olds, they will just screech louder and flail insanely – achieving nothing but to alert people how out of it they are.

Progress is an ambiguous concept, which only denotes monotonic change. From their actions, it can be determined that they are headed in the wrong direction.

That’s an awfully in-depth analysis to be made from a single ambiguous statement made by a total stranger.

So Tom Scocca is a serial liar. Good to know.

One major difference from 50 years ago; WE DON’T CARE ANYMORE.

Is that kind of like the (anonymous) blogger who reported the (anonymous) waitress in an (unidentified) Alaskan diner claiming that she thought she heard Sarah Palin call Barack Obama “Sambo” once?

As Glenn Reynolds has pointed out more than once, “for some people — for reasons of political power or simple self-image — it must always be 1963.”

Black people need to cluck their tongues in disgust at how badly white people behave. That is, when they’re not killing, raping, stealing, having bastard kids & over-breeding, not speaking proper English, falsely accusing people of racism, voting for Democrats…

Are John Lewis’ Lips Moving? Then He’s Spouting Anti-White Race Hatred, As He Has Done For Decades | Daily Pundit | September 1, 2013 at 1:06 pm

According to Chrissy Mathews and other liberals I am a racist.

I embrace my racism.