It’s worth “liking” the “Ready for Hillary” page on Facebook, the former First Lady’s foray into readying the country for her eventual campaign, not only to give your friends a fright, but also to witness just how different her marketing is than her nemesis Barack Obama.

The central theme of the campaign is “Ready for Hillary,” meaning, I assume, that at long last we are ready for her, ready for a woman, ready for returning to the way the Clintons would have things…. 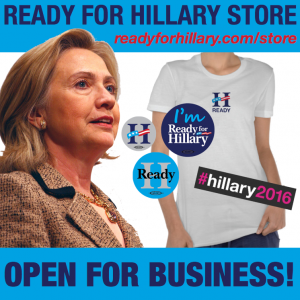 I am struck with how the Hillary rebranding pales in comparison to Obama’s marketing. Although, maybe it’s all part of the plan. Americans may have grown tired of the flashy Obama way, all form and no substance. Instead, her graphics are just a little more regular . There’s no exciting new font (Gotham) or revised new font (Gotham with serifs), and feels more like a return to the 90s than a leap forward in branding.

What Ready for Hillary does give us are endorsements from tired faces (Wesley Clark?) and old wedding photos of the Clintons that harken back to another era. The theme seems to be one of the woman herself, rather than the amorphous themes “change,” “hope,” “forward,” of her old boss.

Hillary has to avoid reminding Americans of her policy failure (Healthcare) and sordid Clinton connections, distracting us the “I’m a woman, it’s my turn” approach.

The Daily Caller’s Jim Treacher made the excellent point that one person who might have been ready for Hillary — referring to the “Ready for Hillary” Clinton marketing full-court press — was ambassador Christopher Stevens in Benghazi.

Another failure of the most sober sort.

Gee, are there not enough choices for candidates that we keep retreads? I feel like we are beading dead horses.

Ready for Hillary because we have plenty of ambassadors.

I’m ready for a president who’s qualified and competent, for a change.

Which rules out Hillary.

I’m ready for Palin to beat Hillary like a red-headed stepchild.

She is so gross. Only Democrats don’t see that.

“Hop on board the bandwagon with our candidate, Elderly Clinton!”

Elderly is incompetent, a liar, a very confused, senile socialist from the sixties.

Really I don’t think the dumocrats realize that there is a very sizable portion of the coutry that sees what incompetent, socialist sixties boomers have done to the country, and wishes they would just go away.

Elderly Clinton for president. What a sick joke.

Also promoted from the tip-line…

I guess this is a “life-time” achievement award for enabling really bad men for many decades.

Oh, she’ll win 2016 because The Establishment will pick another dole, mcrino, jeb bush…they can’t help themselves.

When is someone going to turn her phrase around and make it a question, i.e., Ready For Hillary?

And plaster it next to a particularly hoary photo of her which could scare the pants off anyone.

Now, imagine some of the other pictures “Ready for Hillary” could be put on: Islamic Rage Boy, Jon Corzine, Kermit Gosnell…. Fun, fun, fun.

I’m sure the rest of the world, apart from Britain, Poland, Israel and other close allies and friends, would love to see another loser in the WH.

For those who want to understand better the PURE EVIL that is Shrillary Rotten Clinton, watch the movie from 2008 that the clinton’s had their hollyweird pals BAN from all US theaters…

Note in particular, the statement by Dick Morris – who is a lousy pollster but an absolute expert on the clinton mentality and criminality – of his grave fear of having Shrillary in charge of the IRS, the NSA and other harassment, intimidation, threatening elements of the federal government police state. She’d make the OBOZO totalitarian regime seem benign in comparison.

The movie presents a truly frightening picture of what is likely under a second “monica-stain” bill/Shrillary regime.

In my opinion, the reason Hillary couldn’t seal the deal in the last election was because of the very personal hatred such as some of that expressed above, which has no more place in our national conversation than Bill Maher’s nasty diatribes.

The Democrats at the national level knew this, which is why they went with a total freaking unknown for the candidate.

So, instead of a competent Neo-Clinton administration, we got this gaggle of outliers.

A competent Clinton administration? What have you been smoking, Valerie? The last Clinton administration was rescued from looking like the total screwup it was by the GOP Congress. Every ones of their achievements was credited to Clinton. Had the GOP not won control, we would have been totally screwed from the Largest Tax Increase in History onward!

The Clinton administration were even incompetent at lying. They looked competent because of the LSM, who are providing the same cover for the present incompetent boob that we have.

Fact sweetheart, when the going got tough your girl got hot flashes and bailed.

Look for it. It’s coming!

On the sly, Hitlery will have some cosmetic work down. Face work. Some lipo. She’ll get those lower legs worked on to fix or hide the cankles. Those yellow, Soviet-style front teeth caps will go away.

Seriously, friends… look at a high-resolution photo of her face. It’s a disaster, and she never hides any of the ravages with foundation or base. Trust me, I’m a master Photoshop guru.

She’s a clown. There’s a lot to ridicule.

We just have to watch for the likes of Jeb Bush, who is idiotically working to enable her.

Rebranding Hillary? Yikes. The sizzling flab and the screaming.