Today we learned that it only took Hillary Clinton less than an hour to become Twitter-verified. Twitter verification is the blue checkmark in the corner of a twitter profile.

This speedy event was unrelated to the alacrity with which a charity of Barack Obama’s brother was approved by the IRS’s Lois Lerner, an “unprecedented timeline” for tax-exempt status.

Hillary’s brand renovation, part of efforts in recent years to distance her from a less than appealing image, has been paid marked attention over the past year. The strategy appears to center on reinforcing the image of Hillary as in-control, self-effacing, powerhouse wearer-of-cool sunglasses. 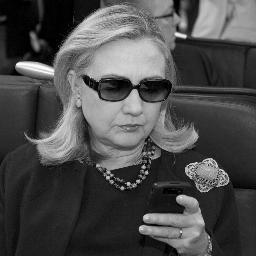 I’ve written about this before in “Hillary Brand Renovation Formula Officially Established.”

Hillary must continues to distract from the other image we have of her, the 90s relic who failed on HillaryCare and has dubious “feminist” bona fides in actual practice. The woman for whom success was found through her husband and his insider connections rather than a pristine climb to the top.

The same formula of “sunglasses + self-deprecation + overwhelmingly capable” from last year’s “Tweets from Hillary” site has been reused in this latest brand extension. Her Twitter description reads:

The timing is more than perfect as Hillary’s frenemy Obama faces the most trying times of his administration.

Back to her twitter verification, this story isn’t so far off from the special attention afforded to Malik Obama’s charity. It illustrates the story of power and interconnection between our government and its cronies, the queen of which is Hillary Clinton herself.

Twitter’s FAQ on account verification reads: “We do not accept requests for verification from the general public. If you fall under one of the above categories and your Twitter account meets our qualifications for verification, we may reach out to you in the future.”

This “hair icon” is definitely not one of the general public.

What glass ceiling did Hillary crack? Can’t figure that one out.

First SecState to hire a member of the muslim brotherhood as a trusted adviser.

It’s interesting that she lists “wife” first. Does she even live in the same town as Bill Clinton?

And should a “powerful” woman’s identity really be defined by her status as “wife”?

That is supposed to be a selling point? Oh brother ~

She hides behind the pantsuits because she is in terrible shape – she’s a mile wide at the hips and thighs. So her handlers try to make a liability into an asset; Hillary Clinton is ALL smoke and mirrors.

Can we start running that “what does it matter” clip…. save ourselves some headaches and take her out of the race early and often. I’m getting a little tired of all the re-treading.

LOLOLOLOL Hair Icon? Oh my stars, that’s priceless. She has taken a hit with Indies and her favorables have dropped quite a bit. Surely this must gall her as the numbers of her “frenemy” appear to have been double-dipped in Teflon.

If there was any doubt she intends to run in 2016 now is the time to stop doubting. Whether she can do enough brand renovation to bamboozle the public into believing she is a likable candidate remains to be seen.

Hillary Clinton has been a professional nominee all her life. She has done nothing – absolutely nothing – on her own. Other than the walk-on senate victory in New York, for which she purchased a house in NY to qualify as a candidate, she has no personal accomplishments, has done nothing of merit, or even positive, in any of the positions held.

Smartest thing she’s done lately: resign on her own terms rather than being forced to resign over Benghazi.