Go on Oprah, admit that the claim to be Cherokee was a mistake and that she knew it at the time or at least had serious doubts, but make like it’s not important to who she is as a person.

Her supporters don’t care anyway, and some of her opponents might think better of her for fessing up.

Winfrey closed the hour-long second part by asking what the moral to story would be. Armstrong had no answer, so Winfrey offered one up for him, by quoting his first wife, Kristin.

“The truth will set you free,” Winfrey said.

It continues to dog her, and always will until she admits what she did, as witnessed by this comment at MassLive, which came to my attention when I saw people clicking over, referencing a post at Legal Insurrection, Elizabeth Warren’s white great grandfather shot an Indian. 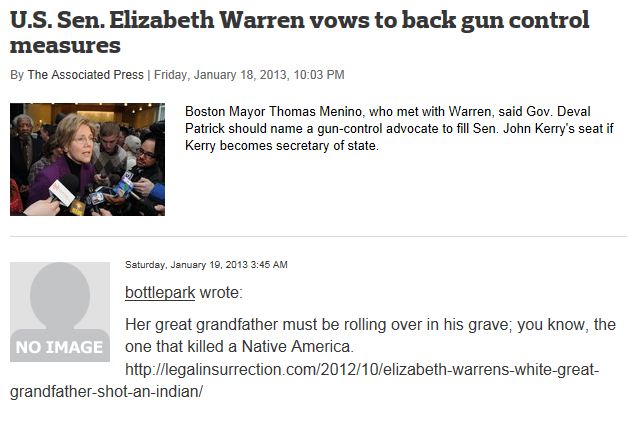 Lance is confessing because he wants something (participating in sanctioned competitions) which gives me pause as to the genuineness of his coming clean.

Warren has just won the Tour de DC with her election, having won earlier heats with her stints as an “American Indian” teacher at various law schools, finally getting on the Harvard varsity. There’s no need for her to do a confessional.

Oh, Kristin said that. I thought I heard it somewhere.

Warren could have completely snatched this off the table many months ago, as we said.

She didn’t, apparently, for the same reasons that Armstrong lied and destroyed people around him to maintain his lies…

she loves the lie, and what it got her.

And it isn’t something that bothers her.

Lance is confessing because he wants something (participating in sanctioned competitions) which gives me pause as to the genuineness of his coming clean.

Warren has just won the Tour de DC with her election, having won earlier heats with her stints as an “American Indian” teacher at various law schools, finally getting on the Harvard varsity. There’s no need for her to do a confessional.

“Why won’t she just come clean?”

Not enough soap or detergent in this world, that’s why!

What ever happened to the practicing law without a license issue? Did I miss another coverup?

Prof can you please followup on this?
its bugged me too.

In my perfectly ordered world where karma exists, Warren as a member of the Banking Committee is forced to take action or recuse herself from actions questioning the legitimacy of

As of this writing, you have two thumbs down on your article which leads me to think you’re till touching that nerve, Professor…thank you!

You have no idea what a nerve it touched with the Warren crazies.

“Why won’t Elizabeth Warren just do a Lance Armstrong on the Cherokee controversy?”

Because she felt that revelations at this time of her being the first Native American nursing mother to take the bar exam while winning the Tour de France twice just a year after joining a cycling club to “meet people like myself” would be lost and ignored in the current media frenzy of reporting obsessed with the emerging crazy lore of Notre Dame’s Manti Te’o.

And in the latest twist in the bizarre story of Manti Te’o, it has emerged that the imaginary girl’s parents, fervently against the marriage of their daughter to a player 1/12 loser, caused the as-of-yet unamed girl and Manti to skype a plan to elope.

LukeHandCool (who, the semester he lived in the University of Hawaii dorm, had a roomate who had an imaginary girlfriend. He would keep Luke up at night typing letters from her to himself which he’d leave on Luke’s desk for Luke to notice. Yes, he was a psychology major)

Because she’s running for President as a Holier Than Thou candidate. Remember the worship of Saint Hillary before the Prophet Barack lured her congregation to his new religion.

The Left doesn’t care that their idols have feet of clay, but a layer of denial over those feet is indispensable to them.

As Warren prepares for her presidential run she will probably do The View and Oprah to help mitigate the fall out. She will not tell the whole truth. She will just say that she was misunderstood.

The last thing a progressive will do is cede one microinch of an argument to the ‘other’. Warren strikes me as equally petty as Obama, and therefore never willing to give any credit or even acknowledge the viability of their opposition (unless, of course, such action gives them increased political leverage in the end). She even proved herself to be almost as petulant at times on the topic of her heritage. But Obama still merits top honors on that in my view.

There are a few Democrats left that care about character (very few) and now that Warren is safely ensconced in the Senate she will begin to rebuild her reputation as a caring person working hard for the “little” people and not at all interested in her own personal advancement. This worthy? replacement for Teddy will soon be known as the “Lioness of the Senate” as part of her character rebuilding process.

I think she eventually will issue a non statement along the lines of, “Growing up it was always understood in my family that we had Native American ancestors. In hindsight, I should have done more to verify this information before I choose to show my respect for the history and diversity of our Native Americans by associating myself with them as a part of my academic career.”

She will simply wait until some massive, gotta cover it, biggest thing in the world news story comes out on a Friday and then quietly issue the statement to a friendly reporter at the Boston Globe.

Absolutely. All she has to do it coordinate the Friday newsdump with Zippy’s cadre over at 1600, and the story is concluded.

She used them when they were useful, now they are a liability.

Maybe she “really, really” believes she is an Indian, just as Obama believes he is God.

The issue of her genetic heritage can be resolved with simple DNA testing. Let’s offer to pay for it.

Granny Warren will not fulfill her tenure as Senator based on undisclosed mental instability issues.