Elizabeth Warren still is not Cherokee.  She never was.

Her family lore is grossly exaggerated, in all likelihood by Warren herself not her parents.  Yet whenever anyone questions this family lore, Warren acts like it is an attack on her family, thereby shutting down challenges to the stories.

Warren relies on family lore because it’s hard to disprove what she claims she was told.  It’s why Warren digs in deeper with her family lore stories as the campaign goes on.  She thinks she has found a safe place.

Yet there is plenty of evidence that the story about her parents eloping because her mother was Native American is not true, Warren didn’t self-identify as Native American until she was 38 and climbing the law professor ladder, and even her own adult nephew who researched family genealogy called the Native American claim just rumor.  The Boston Globe’s attempt to back up this family lore actually ended up calling it into serious question.

But, while Warren thinks she has found a safe place in her family lore, it’s still worth pointing out that she is not Cherokee.  The Cherokee line supposedly was through her maternal grandparents, the Crawfords.

But just to put another piece of evidence on the table, real Cherokee genealogist Twila Barnes has come up a newspaper clipping from the Muskogee Times Democrat on August 17, 1906.

The newspaper clipping relates to a story about how Warren’s great grandfather, John H. Crawford, shot a real Indian and was identified in the newspaper as white, via Twila Barnes:

Elizabeth Warren is the granddaughter of Hannie Crawford, daughter of John H. Crawford. Warren says the Crawfords were Cherokee.

According to the Boston Globe,

“Rosco Crawford, Hannie Crawford’s brother, told (his granddaughter) that as a young boy living in the Creek Nation of Indian Territory, the Indians were “pretty mean.” Once, when a Creek was hitting Crawford’s younger brother, their father shot and wounded the Indian, according to her biography, on file at California State University at Fullerton.”

The story Hannie’s brother, Rosco, told his granddaughter is true. 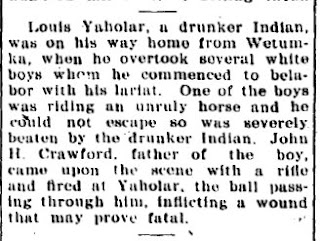 Why is this significant? Because it refers to John H. Crawford as a white man.

This clipping also helps further debunk the elopement story, as Warren’s mother’s family was identified as white even in the local paper.

Twila Barnes has endured harassment and insults because of her fine work debunking Elizabeth Warren’s mythology.

Whatever the outcome of the election, at least the truth is out there.

she just got a few points in the story wrong…?

blood IN the family or blood ON the family, just the difference between I and O.
makes sense to me 🙂

This is the 19th century version of “I kissed a girl”

Oklahoma resident here… in defense of the Professor, let me say that many Oklahoman’s think they have Native American ancestry, far more than can prove it up. My father-in-law’s first wife was supposedly an Indian. Never talked about it, divorce having been more shameful even than marrying an Indian. A partner of mine thought he was Indian but never thought to find evidence until his kids were college age. Family NA lore is commonplace here, but everyone else in the world verifies, except Harvard?

Obviously, the shame of killing this poor minority brought about the “family lore” of being Cherokee as penance.
… or any other fantasies that work for you.

My gosh, even if you are the staunchest Democrat ever, have some dignity and stay home rather than vote for this demonstrated fraud.

Maggot – You had me going there, right up to that part about dignity, and then it just fell apart. 🙂

The voters in Massachusetts may not care, but for Ms. Barnes peace of mind I’m glad she followed through. She needs to be on PBS History Detectives.

My takeaway from this story is that Elizabeth Warren should be a supporter of gun rights.

She’s apparently descended from adherents of the Philip Henry Sheridan school of relations with Native Americans.

So now shooting indians entitles you to affirmative action? I mean seriosuily will the warren family stop beating on the indians? Its like their abuse of indians is genetic or something.

The bloodless revolution that brought down the Soviet Union was facilitated by faxes. At the time, every office had a fax.

Now, we all have computers, many of them portable, and access to research into newspaper coverage from at least the 1900s. All it takes is for one person to decide to get an answer.

Last night, I watched Barack Obama tell some jaw-dropping lies, and while I was pleased to see that Mitt Romney handled those lies very well, I know that Mitt’s credibility hinged more on my knowledge of the background facts than his superb performance.

My quick scan of the results shows that the Democratic talking heads are doing their best to obscure this point, by mischaracterizing Obama’s performance as being dull and listless.

Obama was good. And if I didn’t know better, I might have believed him.

Okay, the coffin has been closed, the lid nailed down, and now we have to encase it in concrete? Amazing what silence from the lapdog media does to kill a story. Even most conservatives I speak to have no idea who Warren is. This should be game over for Warren’s hopes. Native American sensitivity is exchanged for the hope of another D in the Senate, just as women’s rights are exchanged to appease sharia-minded radicals. Disgusting–and informative–to see who the libs will throw under the bus.

Along these lines, the “womyn’s movement” gave Clinton a free pass on Paula Jones, Kathleen Willey, Juanita Broaddrick, Monica Lewinksy … and who knows whom else. According to liberal theology, if the cause is just, just look the other way.

In the same manner as Communists and Progressives have sacrificed tens of millions of their own “for the cause”. In that context, what are the sensibilities of a few Indians, they reason.

A pox on their damn houses. All of them.

The easy comeback to the “It’s what my parents told me” thing is, “So you weren’t interested enough in this important part of your heritage to actually find out anything about it?”

But at this point, a comeback shouldn’t even be needed. What is wrong with Massachusetts voters that this phoney hasn’t been completely laughed out of the race? (keeping in mind that I live in New York, where she would probably be a lock to win)

Just an early example of the biased MSM. {sarcasm off}

Maybe it’s not Cherokee ancestry that runs in the family, at all. Maybe it’s insanity. Maybe old Aunt Bee was nutty as a fruitcake and decided that she had some of that nasty old Injun blood in her. Well, along comes Lizzie Warren of the same fruitcake gene pool and glams onto Aunt Bee’s Injun obsession. We didn’t know Aunt Bee, but we can see Lizzie’s aberrant behavior. Hell, we can even read some of her ravings and musings.

As I said before, on the road to Batsh!t Crazyville, Lizzie Warren has already passed through the outskirts doin’ 95 in a 45 zone.

I know the importance of family lore. My family lore says that my now-deceased grandfather, Billy Bob, was in fact the second son of Britain’s King George V. Long story short, my grandaddy should have been made king instead of Uncle Bertie, whom you folks probably know better as King George VI. Now, neither PopPop BB, nor my father, Prince Junior, cared much about being the rightful sovereign. But I think I do.

So, cousin Betsy, based on family lore, I’d like the crown. Please leave the keys to Buckingham under the front door mat. Thanks, cuz.

[…] The Legal Insurrection writes: Her family lore is grossly exaggerated, in all likelihood by Warren herself not her parents. Yet whenever anyone questions this family lore, Warren acts like it is an attack on her family, thereby shutting down challenges to the stories. […]

First Ward Churchill and now this nutcase. Wouldn’t it be great if universities would hire faculty based on their qualifications? A good deal of this mess could be avoided altogether.

Wouldn’t it be great if universities would hire faculty based on their qualifications?

I think they do not think that word means what you think it means. 😉

[…] bizarre. Now, we are learning that her great grandfather shot a Native American after a scuffle. (Legal Insurrection) – Elizabeth Warren still is not Cherokee. She never […]

Isn’t a little bit humorous that Warren is a law professor and when challenged on her claim the best she can do is offer hearsay? From a law professor?

[…] William A. Jacobson writes for Legal Insurrection, Oct. 4, 2012, that “Warren relies on family lore because it’s hard to disprove what she claims she was told. […] Yet there is plenty of evidence that the story about her parents eloping because her mother was Native American is not true, Warren didn’t self-identify as Native American until she was 38 and climbing the law professor ladder, and even her own adult nephew who researched family genealogy called the Native American claim just rumor. The Boston Globe’s attempt to back up this family lore actually ended up calling it into serious question.” […]